The greenback rallied on both Monday and Tuesday, then rose early in Wednesday’s trade to hit a 14-month high near 97.00 before the tone of trade took a turn for the worse. The dollar index closed Wednesday near the same level where it opened before selling off on both Thursday and Friday. This price action created an “evening star” candlestick pattern, which tends to mark at least a near-term top for a market.

So far in this week’s trade, the world’s reserve currency has tried to mount a comeback before getting sold back lower to break the 96.00 level. Though we would argue that the dollar was vulnerable to a pullback regardless, today’s selloff has been exacerbated by headlines that President Donald Trump was complaining to donors that new Fed Chair Jerome Powell was raising interest rates too aggressively. As the ongoing situation in Turkey reminds us, the central banks’ independence from political pressures is sacrosanct, and while there’s no reason to believe Trump’s comments will impact monetary policy moving forward, traders have decided to sell the greenback first and ask questions later.

Looking ahead, there is little in the way of market-moving economic data scheduled for this week. The Federal Reserve will release the minutes from its most recent meeting on Wednesday, but with traders already pricing in a nearly 95% chance of an interest rate hike next month, there may be little in the way of new, actionable information. Jerome Powell’s speech at the Jackson Hole Symposium on Friday (“Monetary Policy in a Changing Economy”) is where traders will be watching for any hints of dovishness from the august Fed Chair.

Technically speaking, the previous resistance area around 95.50 may provide support moving forward, with a break of that level exposing the three-month bullish trend line around 95.00. Swing traders should still be favoring buy trades above that area, but with the near-term momentum and news pointing lower, readers may want to watch for bullish price action before jumping on the longer-term bullish trend. 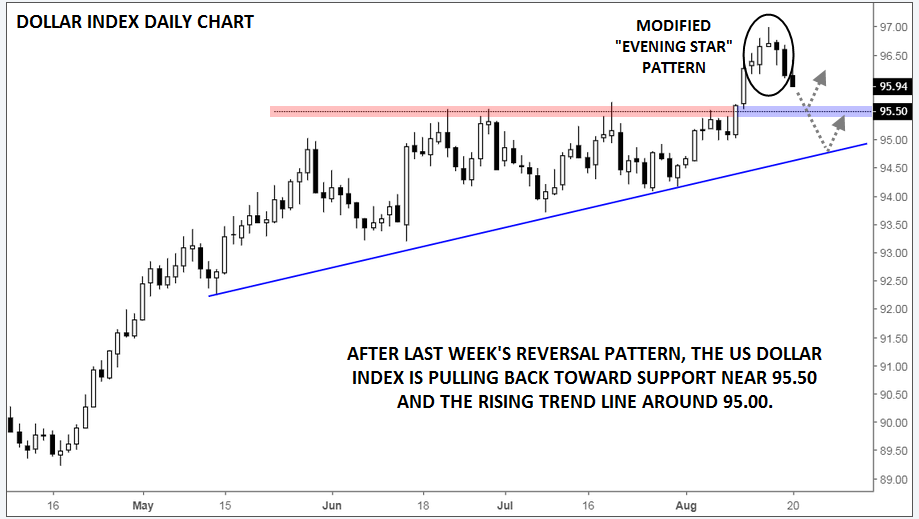