At the start of today’s European session, things were looking bleak. Oil was down, European stocks were trading lower as were US index futures, while safe-haven gold was firmer. However, in the afternoon, equity markets bounced back sharply once the US session got underway while gold started to drift lower again...

At the start of today’s European session, things were looking bleak. Oil was down, European stocks were trading lower as were US index futures, while safe-haven gold was firmer. Speculators had plenty of reasons to feel downbeat on risky assets. Apple for one had produced its third straight quarter of falling revenues last night, while London-listed Lloyds reported this morning a fall in profit and Antofagasta said its full year 2016 copper production was expected to be close to the lower end of the original guidance range, an update that caused its shares to tank.

However, in the afternoon, equity markets bounced back sharply once the US session got underway while safe haven gold started to drift lower again. Bargain hunting saw Apple shares climb back after the tech giant had gaped lower at the open following its earnings results last night. Added to this, Boeing and Coca-Cola posted results that beat analyst estimates on both revenue and earnings. Furthermore, both Brent and WTI crude contracts jumped for a time back above the $50 handle on news of a surprise inventory reduction in the US and this caused shares in oil companies to rebound. However, oil prices have since given up a big chuck of their gains, partly because of growing scepticism over a freeze/production deal between the OPEC and Russia. With several important OPEC members asking to be exempt from a production freeze, it leaves just Saudi, Qatar and a few other Gulf states to shoulder the responsibility, which clearly is not in their interest. Still, as I pointed out yesterday, hopes that a production cut or freeze will be agreed upon are not completely dashed and should the OPEC and Russia reach an agreement then this should lend support to oil prices in the short-term.

As far precious metals are concerned, they have been showing relative strength in recent days with gold, silver, platinum and palladium all shrugging off the dollar’s advance while the euro-denominated gold stretched its winning streak to eight days yesterday. It is not unheard of for gold and dollar to go in the same direction of course and there is an element of safe-haven flows propping up precious metals, especially ahead of US elections. That being said, I am not convinced about the prospects of a more noticeable rally because ultimately the rising US bond yields reduce the appeal of gold and other noninterest-bearing precious metals. In fact, precious metals could be on the verge of another big drop.

Indeed, gold in euro terms has turned sharply lower today from the key €1170-74 old support area after filling the void that it had left behind following its collapse on October 4. At the time of this writing, it was displaying a bearish engulfing candle on its daily chart, suggesting there was a shift from buying to selling pressure today. Meanwhile gold priced in the US dollar, is again failing to hold its own above its technically-important 200-day moving average. It has turned lower after testing the previous resistance level at $1277. But even if gold were to climb decisively above its 200-day moving average, it will still face further, probably stronger, resistance around the $1300/10 area, which was a key reference point prior to that breakdown. So, I will remain sceptical for as long as $1300/10 holds as resistance. In the short-term, a potential break below $1260/1 support area, which is likely in my opinion, could pave the way for a re-test of the $1250/1 support level and if the latter also gives way then we could see the onset of a much larger correction towards $1200 or even lower. 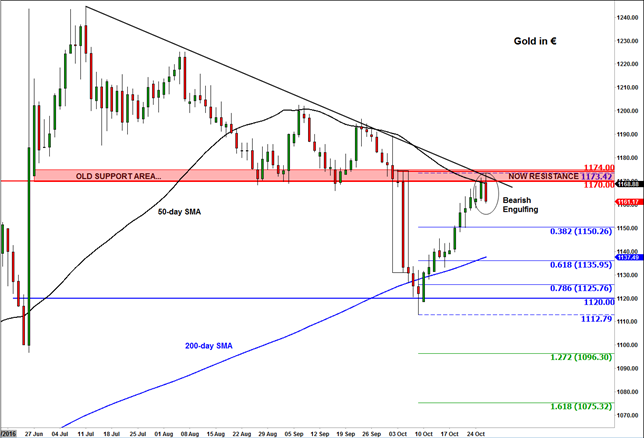 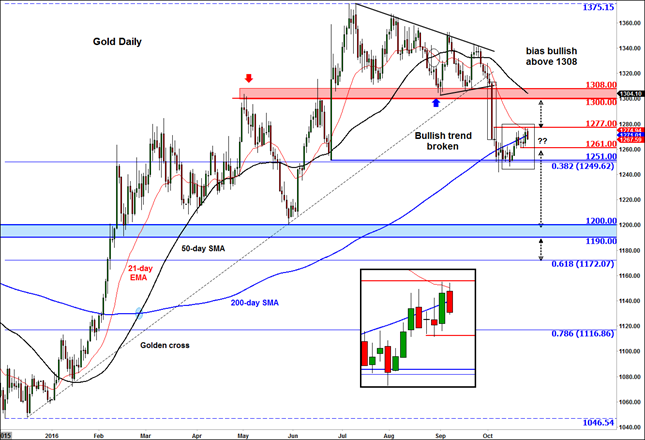