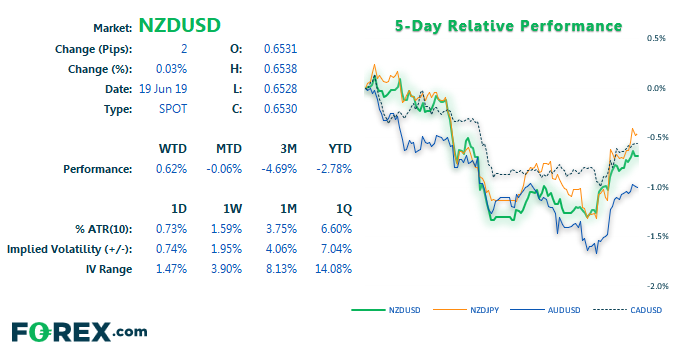 As per usual, Trump took to Twitter to announce he’s had a ‘very good’ conversation with Xi and the two will hold and extended meeting in Japan next week.  Although arguably more importantly (given the claims that have been made by Trump on trade developments) markets received confirmation from China the meetings would indeed take place after initially declining to comment.

Markets were quick to respond with equities moving broadly higher with shares across Asia expected to follow Wall Street’s lead. WTI posted its most bullish day in 5 months helping to support the Canadian dollar, although the boost in sentiment provided quite a tailwind for commodities and FX in general. NZD/USD was the biggest mover of the session and appears set to head for 0.6560 resistance, near the 38.2% Fibonacci retracement level. Given the decline failed to test (let along break) the June low shows there is demand down at this level. However, also take note that the FOMC meeting and NZ GDP figures are released over the next 24 hours, so we fully expect NZD/USD to get caught in the crossfires and volatility is expected.

Of course, we cannot talk trade developments between US and China without looking at the Yuan. For now, the magical number 7.0 barrier which the markets are fixated upon appears safe to hold for now. Technically, USD/CNH appears to be carving out a topping pattern to pave the way for further weakness. A bearish divergence has formed between prices action ahead of yesterday’s sell-off and, at the time of writing, price action looks eager to break to new lows.

The 38.2% and 50% retracement levels reside around the 50 ad 100-day eMA’s, so these are viable areas of support. However, of the two levels, 50% may prove to be the more resilient, given it lands perfectly on the original breakout level. However, a weaker USD/CNH also assumes sentiment between US and China remain positive. Therefore, we must consider that the wheels could come off again if no deal is reached, which would likely be a bullish story for USD/CNH and a bearish one for commodity currencies.