Risk Off and BOJ this Week: USD/JPY, AUD/JPY, EUR/JPY

The first 2 days of this week have the making of a no-deal US fiscal stimulus package before the election.

The first 2 days of this week have the making of a no-deal US fiscal stimulus package before the election.  In addition, the uncertainty of the election may continue to put pressure on stocks.  Stocks don’t like uncertainty, and yesterday S&Ps were down nearly 3%  at the lows. If this continues, traders will search for safety, which includes buying Yen.  The BOJ meets this week and is expected to reduce their outlook for growth and inflation.  While this is a negative for Yen, traders tend to buy Yen during negative events.  The reason is the perception that the Japanese government will always be there to support the Yen.

USD/JPY has been trading in a descending wedge since late March.

However, within that range USD/JPY has been well defined, as seen on a 240-minute timeframe.  In addition, after a false breakout of a flag formation yesterday with risk-off, the pair pulled back into the flag and broke to the downside.  The target for the breakout of a flag pattern is the length of the flagpole added the breakdown point of the flag, which is near 102.50.  This level also corresponds with the bottom trendline of the descending wedge on the daily timeframe.  If price is to reach there, it must first break through the September lows near 104.00. 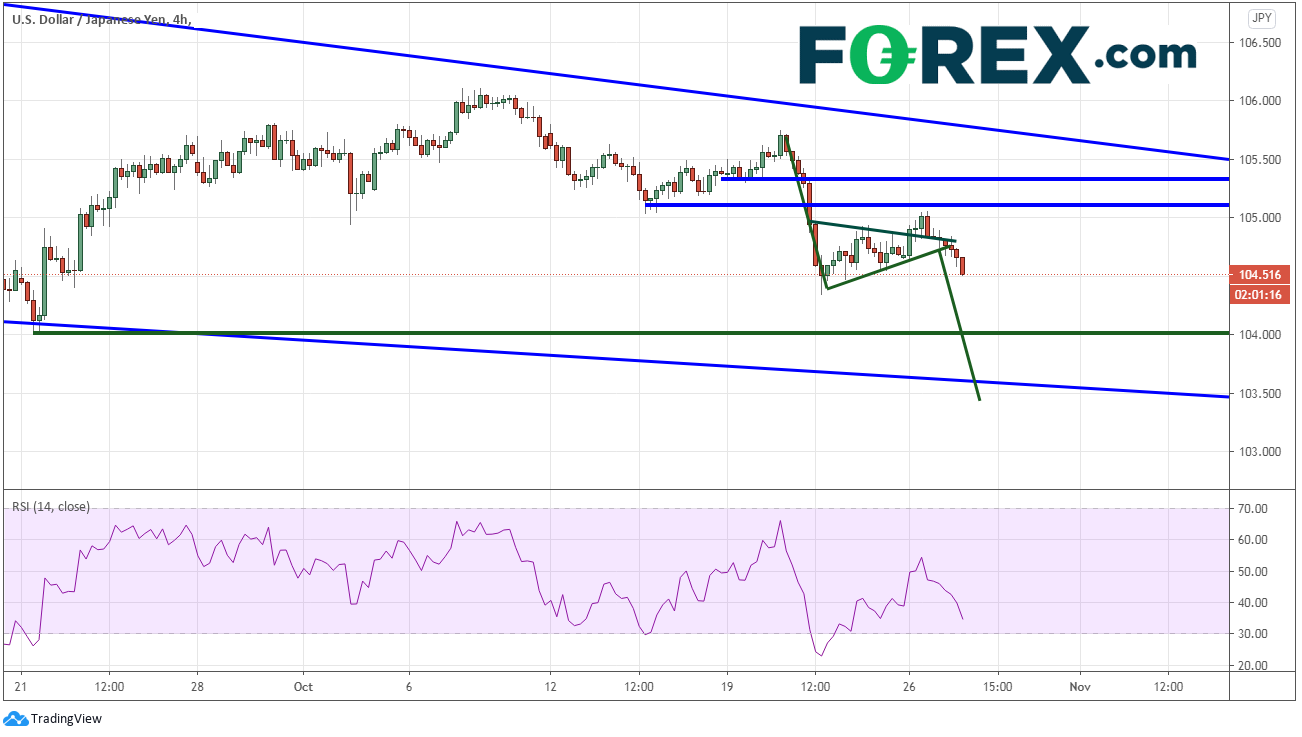 As we wrote about last week, AUD/JPY is in a descending triangle formation.  With the RBA signaling they are ready for more QE, the Aussie has been weak vs the Japanese Yen.  Support for the triangle is near 74.00.  However, if price breaks, the target for the breakdown is near 68.18! This level also coincides with the 50% retracement of the March lows (not shown) to the August 31st highs.  However. If price is to reach the target, it must first break though horizontal support near 70.25. 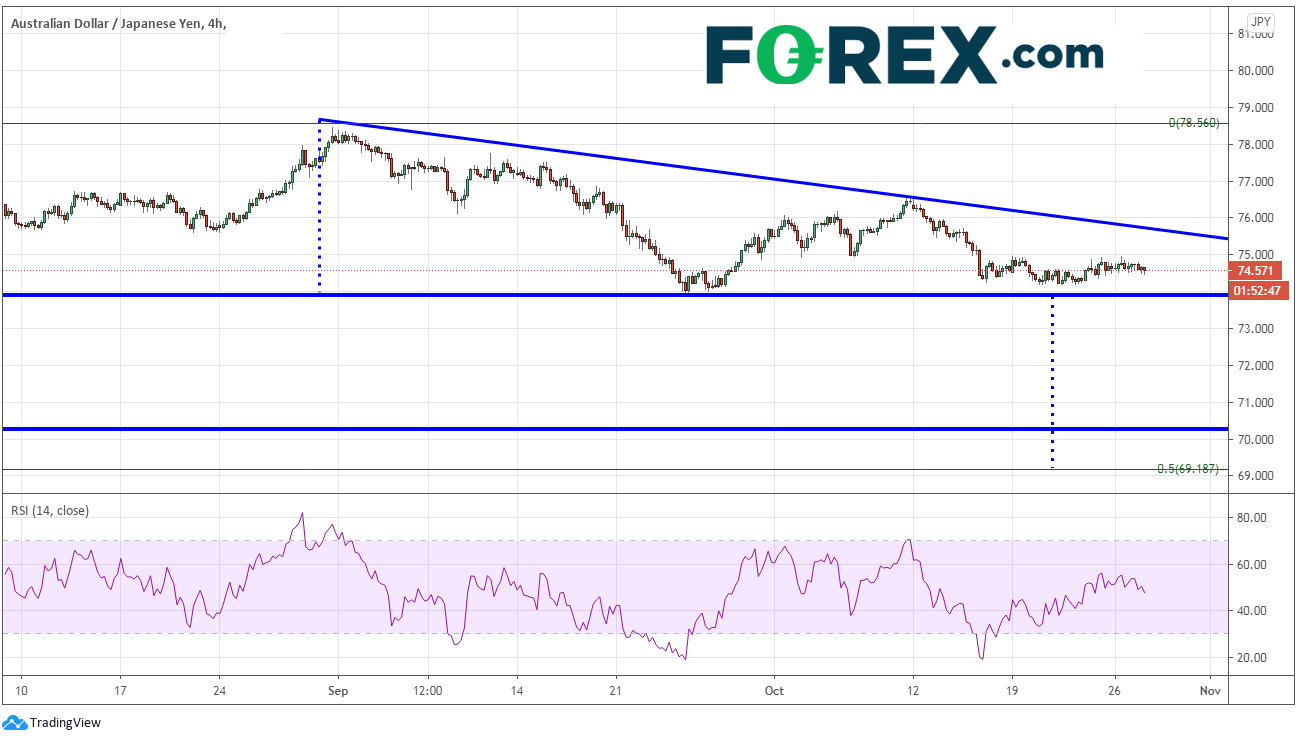 Throughout the summer, EUR/JPY has been forming a head and shoulders pattern.  In mid-September, price broke below the neckline of the pattern near 124.30.  The target for a head and shoulders pattern is the distance from the head to neckline, added to the breakdown point of the neckline, which in this case is near 124.50.  Price was well on its way to the target until it ran into support at the 61.8% Fibonacci retracement from the June lows (not shown) to the September highs, near 122.30. The pair bounced and twice had false breakouts back above the head and shoulders neckline (resistance). 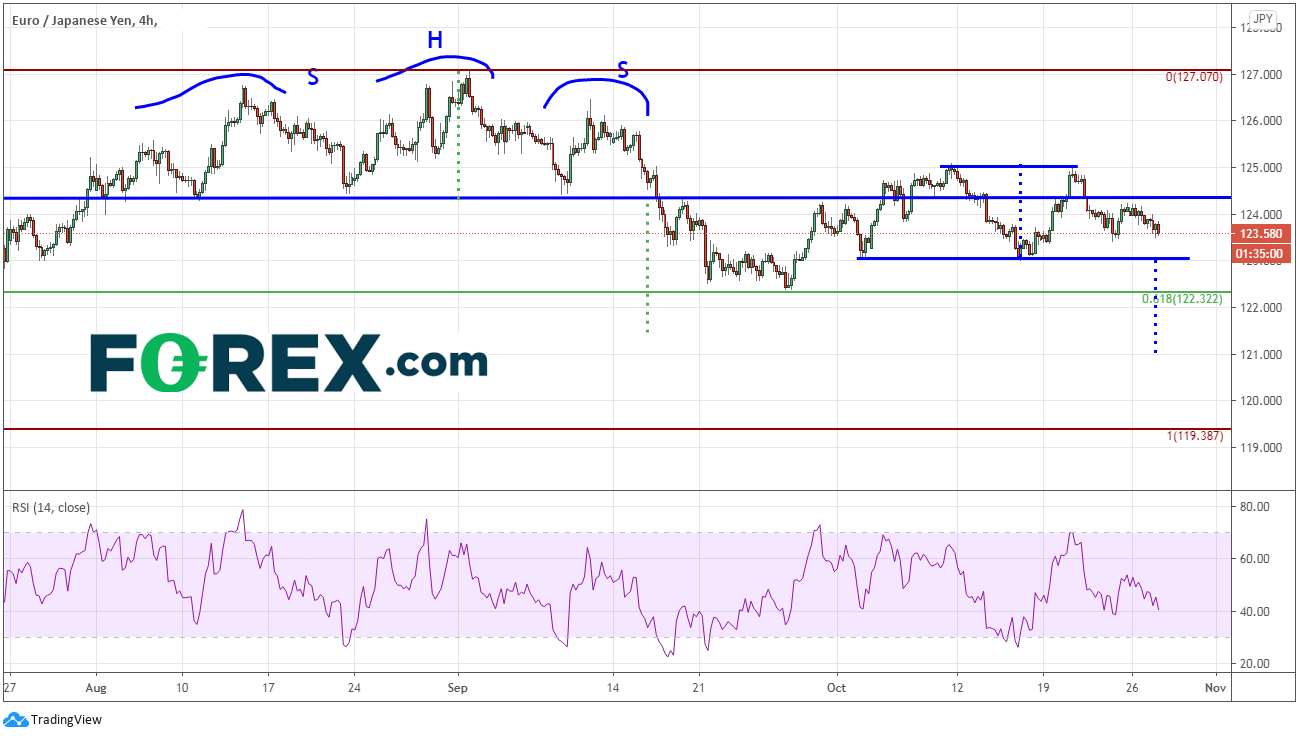 The pair in now in the process of forming a possible double top near 125.00.  If price breaks through the October 23rd lows near 123.00, a double top will be confirmed.  The target for a double top is the height of the pattern added to the breakdown point, which will be near 121.00.  Therefore, if risk-off continues and Yen continues to strengthen, EUR/JPY could trade into the 121.00-121.50 area.  Support is the previously mentioned 61.8% Fibonacci retracement level near 122.30. 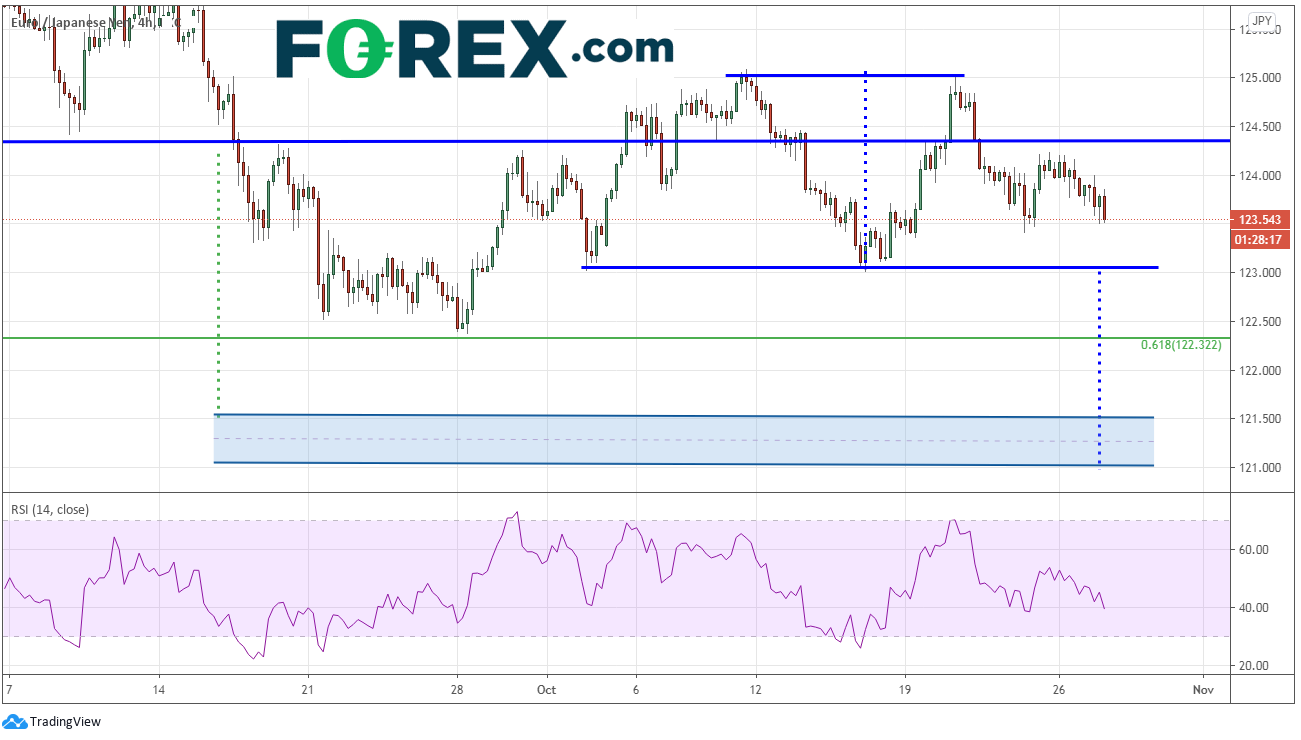