Russia: Let’s get ready to rouble

With an invasion of Ukraine seemingly underway, the Russian rouble is arguably Russia's first casualty.

There is no shortage of Russia-related headlines at present, and they're show no immediate signs of abating. Over the past 24 hours we’ve seen market sentiment rise, fall and then fall some more. Within hours of markets rallying on hopes of a Biden-Putin summit, the Kremlin were out to pour cold water on the idea and saw earlier gains more than evaporate. Vladimir Putin has accused the Ukraine of hoarding nuclear weapons whilst addressing the nation live, and the Russian army has claimed that five of their soldiers were killed in the Russian region of Rostov. When taken alongside earlier ‘reports’ from Russian State media of shells being fired in two disputed regions in Ukraine, it seems quite apparent that Russia were laying the groundwork for an invasion. But those fears have turned into reality.

After Putin signed a decree to recognise to breakaway groups as independents, reports quickly followed that Putin has ordered troops to enter. Then eye-witness accounts of soldiers, tanks and military equipment flowed in.

Russia’s currency came quickly under attack upon the announcement of sanctions from the UK, US and EU. Falling over -5% against the US dollar, it was the worst session for the rouble since March 2020. It was also a near-3-standard deviation move, an event which has not occurred in nearly 2-years. Whilst sanctions will likely do little (or nothing) to deter Putin, they will hamper the economy and we’re sure some investors would prefer to move their money out of Russia sooner than later. 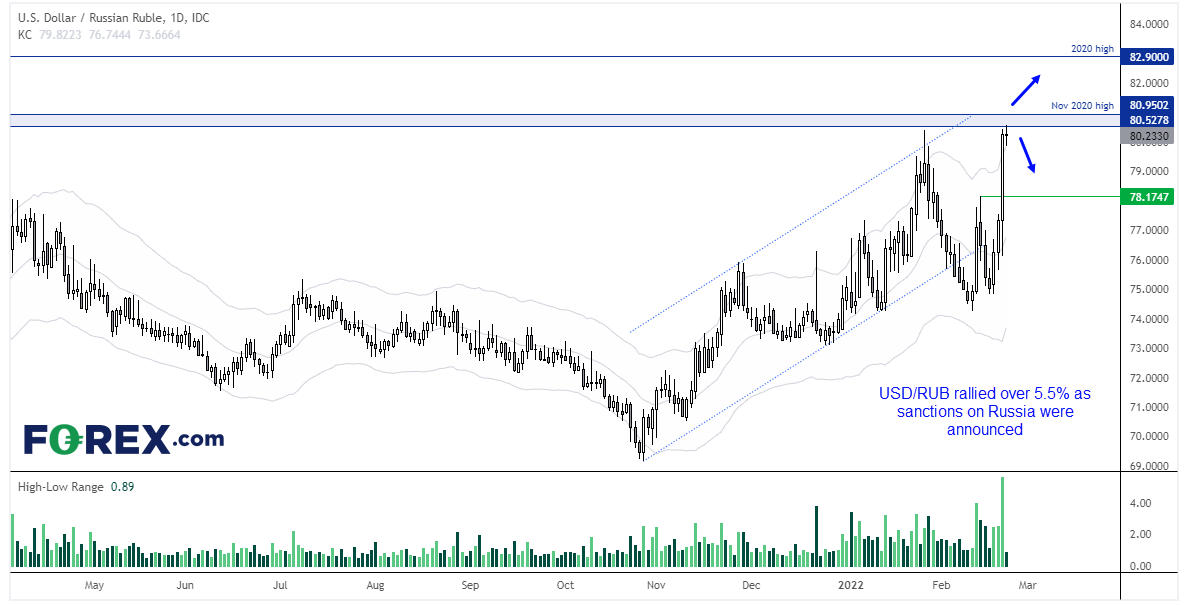 USD/RUB rose over 80.0 for the first time since October, and not even high oil prices were enough to support the flailing rouble. Prices have since stabilised below the October and November highs, and now trade within a tight range during Asian hours. Whether it can continue higher are likely tied to how severe the sanctions are to be once officially announced later today, but USD/RUB is clearly another market which can change its direction at the flick of a switch with sanctions being the likely trigger. Should sanctions fall short of expectations, perhaps USD/RUB is already overbought. But when you consider USD/RUB rose over 130% in the months following Russia’s annexation of Crimea, we wouldn’t want to hang our hats on a market top just yet. But the highs around 80 are likely to be pivotal over the near-term.