The China economy is affected by an outbreak of Coronavirus.....

The China economy is affected by an outbreak of Coronavirus. The government announced that 1Q GDP dropped 6.8% on year (-6.0% expected) last week, recording the first contraction within 30 years. Besides, industrial production fell 1.1% in March (-6.2% expected) and retail sales declined 15.8% (-10.0% expected). In addition, China exports dropped 6.6% on year (-13.9% expected) and imports fell 0.9% (-9.8% expected). We can see that industrial production, exports and imports data for March are much better than the expectation. It suggests that China's trading and production activities do not look so bad.

Secondly, China's economy is reopening as the new Coronaviurs infected cases in China are being low. The new cases of Coronavirus added less than 100 within this week. However, China still faces a challenge for weaker demand of the global economy as the number of new cases in the worldwide remains serious.

From a technical point of review, the A50 Index would be bearish as the prices remain capped by a declining trend line drawn from January. The RSI stays around 50 and has not crossed above the previous high at 59, suggesting the lack of upward momentum for prices. Therefore, as long as 13637 (around the high of March 13) holds on the upside, the index prices would return to the overlap support base at 12416 and 12085 in extension.

On the other hand, a break above 13637 would indicate a breakout of the declining trend line and bring a stronger rebound to the second resistance level at 14198. 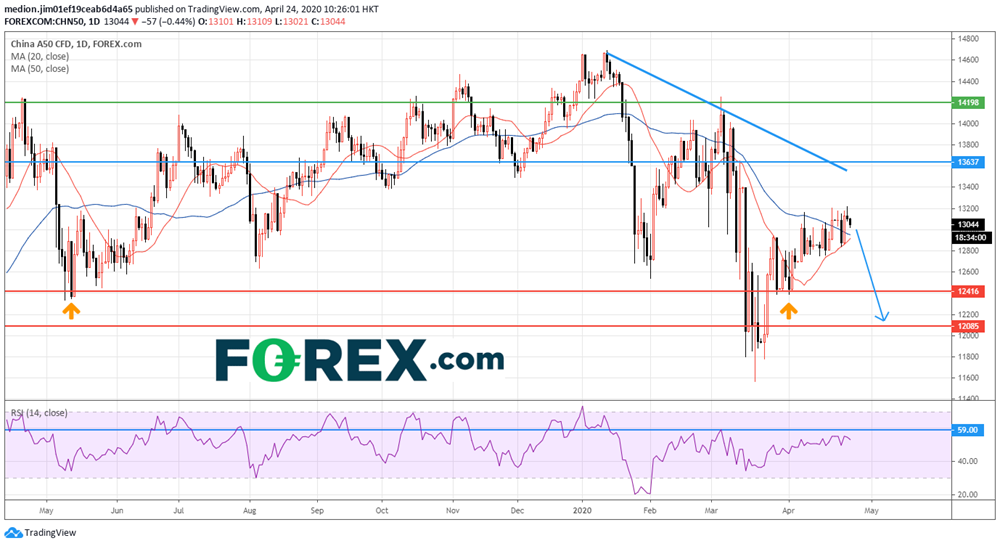