It has been a rather volatile day across the financial markets as investment funds reposition their portfolios ahead of the new month. Equities and the dollar fell further, precious metals bounced and oil gushed higher.

It has been a rather volatile day across the financial markets as investment funds reposition their portfolios ahead of the new month. Equities and the dollar fell further, precious metals bounced and oil gushed higher. In FX, the safe-haven yen strengthened as did the euro while the pound recovered from its early weakness to turn decisively higher against the dollar. Inaction from the Bank of Japan weighed on the USD/JPY, while the EUR/USD surged after Donald Trump's adviser said Germany was using "grossly undervalued" euro to exploit US and EU partners. The euro was also boosted by stronger Eurozone data, suggesting that the European Central Bank’s large bond buying programme is finally working its magic. Inflation rose as unemployment fell and GDP expanded more than expected. As the EUR/USD surged, the Dollar Index fell back below 100.  On a day when equities also fell, the sell-off in the dollar meant that buck-denominated and perceived safe-haven assets were in demand: gold and in particular, silver, surged higher, extending their advance from Friday.

Looking ahead, there is a possibility that the dollar may bounce back later on in the week if the FOMC delivers a surprisingly hawkish policy statement on Wednesday or if the monthly jobs report comes in very strong on Friday. The greenback also looks oversold in the short-term so a bounce of some sort could be on the way as early as this evening. Stocks may also rebound after three down days, in what still is a long-term bullish trend. However, given the technical damage for both stocks and the dollar, any rebounds in these markets should be taken with a pinch of salt until there is good technical indications of trend reversal on the bullish side. A potential bounce in stocks and or the dollar could derail the precious metals’ rally, at least in the short-term anyway.

But one thing is for sure: silver has broken out of its established bearish channel to move above key resistance in the $17.15/25 range. Silver’s technical breakthrough comes ahead of gold, which clearly underscores its outperformance, but it also suggests that the yellow metal may follow suit in breaking its own key resistance level at $1200 soon. Until and unless it moves back below this $17.15/25 range, one can only assume that the path of least resistance for silver is now to the upside. Consequently, we are expecting to see higher prices going forward until such a time silver creates a distinct reversal pattern. On the way up, some of the potential bullish targets are at $17.85, the 200-day moving average; $18.00/$18.15, previous support, followed by $19.00 – the last significant swing high. 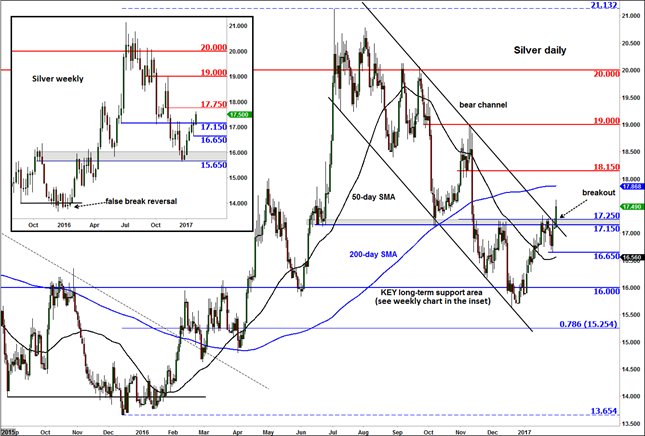