Silver down but not out

Like gold, silver has fallen sharply in US dollar’s slipstream. From a high of around $17.30 in June, the precious metal has fallen to a low so far of $15.20. The $2.10 slide might not sound much in nominal terms but represents a sizeable 12.1% decline in percentage terms.

Like gold, silver has fallen sharply in US dollar’s slipstream. From a high of around $17.30 in June, the precious metal has fallen to a low so far of $15.20. The $2.10 slide might not sound much in nominal terms but represents a sizeable 12.1% decline in percentage terms. Sentiment towards both precious metals are very bearish at the moment. The falling prices have led to sizeable outflows from ETFs and lower central bank purchases. The main concern is the US dollar, which has been on the rise for several months now on expectations that the Federal Reserve will hike rates two more times in 2018. Jerome Powell, the Fed Chairman, more or less confirmed this at his testimony by delivering some hawkish remarks on the economy. So the selling of the precious metals make some logical sense, for they are priced in the dollar.

Precious metals could stage a recovery

However, gold and silver have also fallen in euro, pound and even franc terms. This is because investors are still finding value in the equity markets. Why hold onto something that, unlike bonds and stocks, don’t pay interest or dividends, and cost money to store? But are investors being unreasonably too negative towards precious metals? Are they right to be ignoring the physical side of the precious metals? Doesn’t a stronger and recovering economy mean stronger (jewellery and industrial) demand for precious metals? And how about trade wars and other concerns? These metals are meant to be safe haven assets but they are certainly not acting as such. All this makes us wonder if the markets have got this wrong. We think the metals could make a meaningful comeback soon, especially if the stock markets and/or the dollar were to correspondingly correct themselves. Equity market valuations are sky high and most of the good news for the dollar may be priced in by now.

For now though, silver has been hammered and looks rather bearish as the sellers try to push it below the uptrend of a triangle pattern at $15.20, which has been in place since 2015. So, a potential break below here would be another hammer blow for the bulls. The longer-term trend, which had been in place since 2003 has already broken down at $15.70. This level is the first of the two key resistances to watch now. The other comes in at $16.20, a prior support-turned-resistance level. While the chart of silver currently looks rather bearish, it should be noted here that the week is not over yet and if the buyers do show up here then we could see a bit of a short-squeeze rally.  Ultimately, the longer-term trend remains bearish and so the path of least resistance is to the downside and will remain that way until and unless there is a break in market structure of lower lows and lows highs. Given that the most recent high was formed at $17.30, this level therefore is pivotal from a technical perspective. If and when silver goes above it, then the long-term outlook would turn very bullish. I say ‘very’ because if silver were to get there it will have created also created a false break reversal pattern around its long-term uptrend. 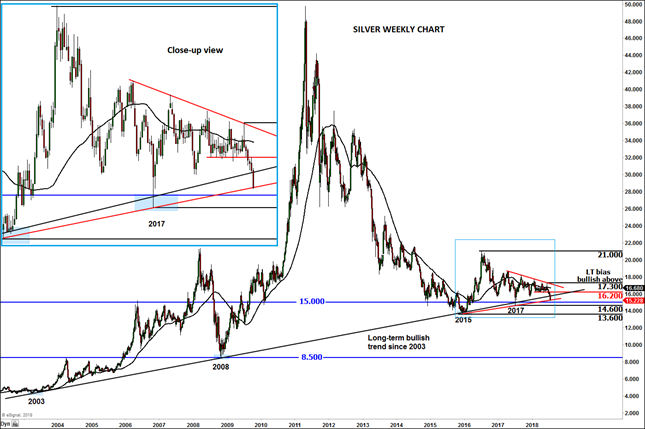