Gold and silver have risen for the third straight day and both precious metals look set to close the week higher. Over the past nine weeks, gold has risen on eight occasions. Silver meanwhile has risen in each of the past nine weeks. These dollar-denominated and perceived safe-haven precious metals have risen during a time when Wall Street has repeatedly hit new all-time highs and despite the dollar holding near its multi-year highs. The metals’ remarkable performance may suggest that investors are positioning themselves up for a major risk-off event – such as a collapse in the US stock markets. With the major US indices rising almost parabolically, it is just a matter of time before the inevitable happens. The trouble is, the parabolic rally could turn literally vertical before the markets start to head south. But one thing is for sure, we are getting very close to the upcoming stock market sell-off. This does not necessarily mean the markets will absolutely collapse. But we are anticipating there to be at least a sizeable correction.

As far as the precious metals are concerned, they appear poised to rise further in the coming days and weeks. At the time of this writing, silver was testing a key resistance level at $18.40 after breaking its well-established bearish trend line on Thursday. This $18.40 level was the last support prior to the breakdown in November that eventually saw the metal drop for a time to below $16.00. Now back at $18.40, the metal is testing the strength of the selling pressure again. Because of the big drop previously, some bullish speculators are clearly happy to book profit here ahead of the weekend. But if and when this level breaks then we may see a quick rally to the next bullish objective at $19.00. This level was previously resistance and corresponds with the 61.8% Fibonacci retracement level against last year’s high. But despite what silver does around $18.40 today, the path of least resistance is clearly to the upside and will remain that way until a key support such as $17.85 breaks down. Ahead of this level, another important support to watch now is at $18.10 – the previous resistance level. 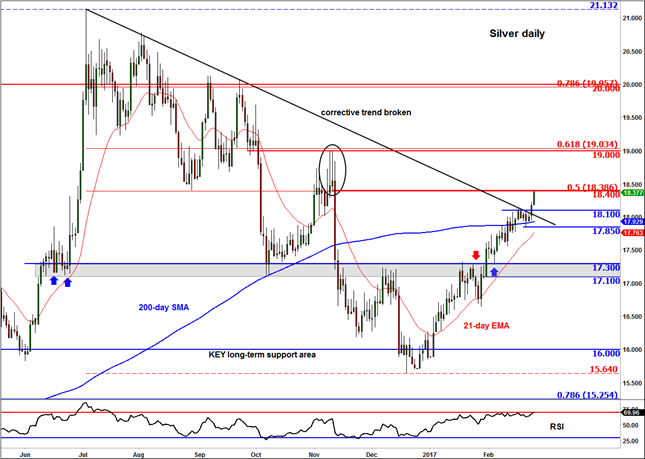