Gold has now recovered from being negative to close the day higher on three occasions in as many days since Friday.

Gold has now recovered from being negative to close the day higher on three occasions in as many days since Friday. The bulls’ resilience is noteworthy, but not exactly remarkable as there has not been much follow-through yet. Indeed, the metal was trading lower again at the time of this writing. But will it stage another comeback later on? Gold continues to track the EUR/USD exchange rate. But unlike the popular currency pair, the metal’s gains have been far less impressive since Friday’s jobs report was released. The precious metal has been supported above all by the dollar, which has remained under pressure. The greenback was unable to benefit meaningfully from Friday’s jobs report, which showed strong gains in non-farm employment and weak wage growth in February. On Tuesday, the dollar was hit by a double whammy of economic and political blows.

Soft inflation weighs on dollar and supports gold ahead of FOMC

The highly anticipated Consumer Price Index measure of inflation for February failed to better expectations yesterday and after Friday’s weakness in wage growth, it underscored expectations that prices are not as hot as had been expected, decreasing the odds of aggressive rate hiking from the Federal Reserve. However, the Fed is highly likely – almost certain – to raise interest rates by 25 basis points next week. But it is all about the FOMC’s outlook for interest rates further into 2018 and beyond, which will be the main focal point for the markets. If recent data, including Tuesday’s relatively tepid inflation numbers, have helped to diminish policy makers’ urgency for higher interest rates then this could put further downward pressure on the dollar and support buck-denominated gold. However, if the Fed turns out to be more in favour of higher interest rates, perhaps because of expectations that high levels of employment may lead to higher wages and therefore higher inflation in the future, then this could be the trigger for a dollar rally, and a gold sell-off.

The dollar has also been undermined by ongoing political drama at the White House, which also had implications for the stock markets as it raised investor uncertainty.  As my colleague James Chen pointed out yesterday, the outgoing Secretary of State Tillerson was a “moderating voice for US foreign policy that helped to serve as somewhat of a counterpoint to Trump’s impulsive and often abrasive attitude towards other countries.” On the other hand, Pompeo, Tillerson’s replacement, is known for his views “that mirror Trump’s hardline stance on international political issues, including the Iran nuclear deal and North Korean regime change, and is seen as having a similar anti-globalist perspective.” In other words, the appointment of Pompeo will be yet another supporter of Trump’s protectionist trade policies, which is what the stock markets worried about yesterday.

Safe haven gold may therefore find support if the stock markets were to come under pressure again, and more so if the dollar were to also fall further in the event of retaliation to Trump’s protectionist policies. In the short-term, however, a lot will depend now on the FOMC’s inflation and rate hike projections next week. As far as today’s session is concerned, we will have more US inflation data in the form of the Producer Price Index. With any further signs of soft inflation and/or threats to global trade, the dollar could extend its losses, especially against safe haven currencies like the Japanese yen and Swiss franc, and gold.

Gold has put in several hammer candles on its daily chart over the past few trading days. Technically, these candles are meant to bullish, for every time the sellers have been trying to exert pressure, the bulls have step up and defended their ground. However, these candles on their own are not enough to encourage traders to turn decidedly bullish, as there are other conflicting signals that need to be taken into account. For example, gold’s repeated failure to get past the 2017 high of $1357, the fact that it has formed a lower low just ahead of the $1300 long term support, and a couple of lower highs. Overall, therefore, the technical signals are mixed in what essentially is a range-bound market. For as long as it remains in the range, traders should remain nimble and trade from one level to the next and then wait for the next opportunity. If gold were to break above $1330 resistance, then this may lead to a rise towards the next level of resistance at $1345, which was formerly support. Meanwhile short-term support comes in at $1324. The next level of support is at $1315, a potential break below which could lead to a drop to $1300 next. 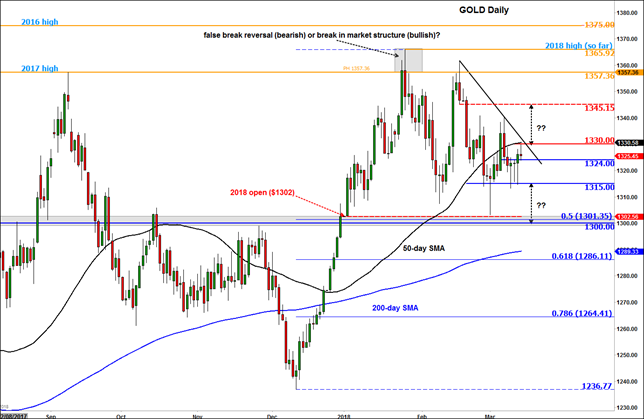