Through Friday, 91% of the companies in the S&P 500 had reported earnings, and according to the earnings mavens at FactSet, this earnings season has broken all sorts of records.

…and those are just the adjectives starting “Sp” through “Su” that describe Q2 earnings season for the S&P 500. Through Friday, 91% of the companies in the S&P 500 had reported earnings, and according to the earnings mavens at FactSet, this earnings season has broken all sorts of records.

To date, 79% of companies have reported earnings above analysts’ estimates, which if maintained, would be the highest “beat rate” since FactSet began tracking that metric in 2008 (the current record is last quarter’s 78% beat rate). The “blended” (combining actual reported results with analyst estimates) year-over-year earnings growth rate sits at 24.6% today, with all 11 sectors reporting double-digit earnings growth. Of course, this is significantly higher than the still-impressive blended revenue growth rate (9.9%) due to general operating leverage and last year’s big tax cut.

When evaluating the health of a market, it can also be useful to evaluate investors’ sentiment, not just the raw economic results of the companies. On that front too, market investors appear enthused. Based on FactSet’s data, companies reporting positive earnings surprises have seen an average gain of 1.2% over that week, above the 5-year average increase of 1.0%. Meanwhile, companies reporting negative earnings surprises have fallen an average of -2.0%, above the 5-year average of a -2.5% return. In other words, investors have been more encouraged by positive results and less concerned with negative earnings figures than usual. On the whole, the S&P 500 is trading higher by about 5% since earnings season kicked off, though obviously there are plenty of macroeconomic and geopolitical crosswinds in play.

Longer-term, the S&P 500’s uptrend remains healthy. The index is trading above its 50- and 200- day moving averages, both of which are trending higher. While US stocks did see a big swoon off the late January highs, prices spent a full six months consolidating between 2600 and 2800 before breaking higher last month.

Technically speaking, the next major hurdle will be January’s record highs at 2873, with a break above that barrier opening the door for another leg higher. To the downside, the confluence of previous-resistance-turned-support at 2800 and the rising 50-day moving average could provide support on any near-term dips, with the 200-day moving average near 2725 serving as another potential floor if that level gives way. 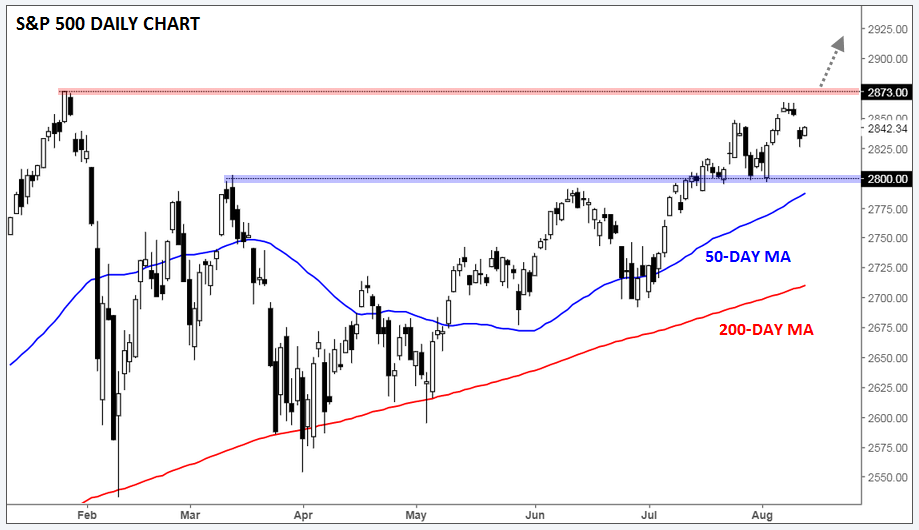