There is a lot of scope for sterling movement depending on the outcome of tomorrow’s election. According to recent polling, the race has tightened considerably between the leading Conservative Party and the closely-trailing Labour Party. From around a 20-point lead in late April, shortly after Theresa May called for snap elections, the average of major polls has dwindled to less than 6 points. But some individual polls have shown a much tighter gap – with one showing just around a 1-point lead for Conservatives over Labour.

Generally, a Conservative victory on Thursday would be seen as positive for the pound as it would signal a potentially smoother, less contentious Brexit process going forward, as well as a more business-friendly government. But even with a Conservative victory, the margin of victory will be critical, as a larger majority and number of seats in Parliament should pave the way for easier Brexit negotiations with the EU, while a tighter margin could stoke fears of ongoing conflict between Theresa May and Brexit hardliners within the UK government. Other possibilities, albeit much less likely, are either a hung parliament potentially leading to a multi-party coalition government, or an outright victory by the Labour Party.

Here is a summary of the primary possible outcomes and their potential impacts on the pound:

From a technical perspective, GBP/USD has been following a generally bullish trend since its mid-March lows. The largest boost for the currency pair occurred in April, after Theresa May initially called for snap elections and Conservatives were far ahead in polling. Late May and early June have seen a steady rise for GBP/USD along the bullish trend line, but much of this rise has been due to a falling US dollar. Currently, the pair has once again approached major psychological resistance around the 1.3000 level, which was reached and slightly breached in May before a sharp pullback. A key technical event to watch for would be any strong re-break above 1.3000 on an election-driven boost for the pound, in which case a key near-term upside target is around the 1.3250 price region. If GBP/USD fails to break above 1.3000 and instead breaks down below the noted uptrend line on a surprise pound-negative election outcome, key short-term downside targets are at the 1.2800 and 1.2600 support levels. 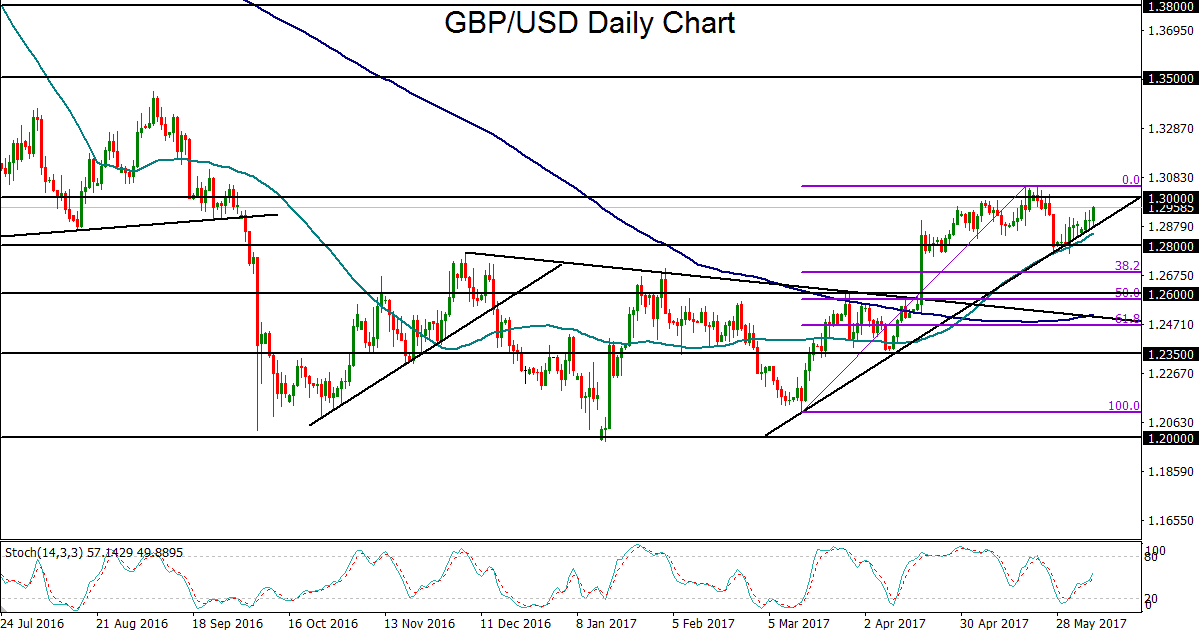