There are tentative technical signs of weakness in the stock markets, probably based on fundamental events happening in the bond markets. Is this the start of a sizeable correction? Time will tell.

The markets are moving fast ahead of the State of the Union Address tonight. After a sizeable drop at the open, stocks managed to bounce back a little heading into the European close only for US indices to then turn lower again shortly afterwards. Gold gave up some of its earlier gains as the dollar managed to find some much-needed support. The dollar, which had been selling off for weeks and was down again today, bounced back a little on comments from Steven Mnuchin, the US Treasury secretary, who reportedly said that a strong dollar would be in the country’s long-term interest. The greenback also found some support from news US consumer confidence rose more than expected in January. Confidence was no doubt buoyed by those tax cuts and the rallying stock markets. But with government bonds selling off, it remains to be seen if the overvalued equity markets will be able to hold their own at these levels, especially if the dollar makes a comeback.

Today saw the yield on the 30-year Treasury get closer to 3% after hitting an eight-month high. The shorter-dated bond yields have already being climbing noticeably for weeks with the 10-year note rising to its best level since April 2014 and the yield on the two-year note hitting a nine-year high. Market participants probably expect to see a pickup in global growth, and in turn inflation, which should see the major central banks, including the Federal Reserve, turn more hawkish. The Fed has already started to shrink it huge $4.5 trillion balance sheet, while the other major central banks have all dropped their dovish stances. As concerns rise over receding monetary support from central banks, there is a danger that the stock markets could hit the reverse gear.  In the short-term, though, the upcoming company earnings results, Trump’s State of the Union Address tonight and the FOMC meeting tomorrow are among the event risks which could provide some volatility across the financial markets. But the big elephant in the room is the rising bond yields, which may very well be a negative development for stocks.

But so far, every single dip has been bought, so to suggest that the markets have topped just based on recent price action is a bit premature. So it remains to be seen whether the pullback we have seen so far will materialise into something more significant. But with the S&P’s distance from the 200-day average growing by the day, the potential for mean reversion is growing. As per the chart of the S&P futures, a 10% drop could push the index back down to the 200-day moving average. If the bears have any hope of seeing that sort of a drop, they will need to push the market below some key support levels now. First and foremost they will need to see the index trade back below 2792, the last low prior to the latest rally. But even then, there is no guarantee the markets will head significantly lower, all bullish bets would be off in the event the S&P goes back below the opening level for the year at 2675. Meanwhile if the index manages to break back above the 2841-56 resistance range then this would re-establish the bullish bias.

So, in a nutshell, there are tentative technical signs of weakness in the stock markets, probably based on fundamental events happening in the bond markets. Is this the start of a sizeable correction? Time will tell. 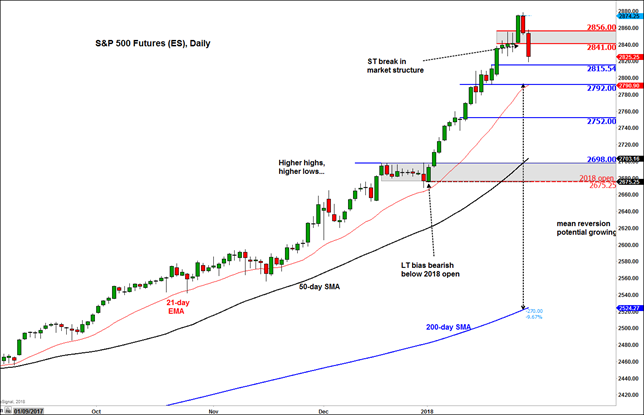