Stocks could rebound ahead of G20 summit

It could be a long wait but we think that equities will probably push higher than lower as we get closer to the G20 summit, given the bullish momentum from last week and the recent sharp falls in bond yields amid dovish central bank action.

With all eyes and ears on the side-lines of the G20 meetings in Japan this week, the markets have been fairly quite in these early parts of the week. European stock markets have been in consolidation mode after last week’s rally. But there hasn’t been too much of a retracement, suggesting investors are probably still positioning themselves up for a positive outcome from the summit between Presidents Trump and Xi. In fact, we also don’t think that the trade talks will fall apart - although if this were to happen, it would immediately raise the risk of a global slowdown and may lead to sharp falls in equity prices. Instead, while a full trade agreement is highly unlikely, the leaders will probably make a commitment to resume talks in July. This would be seen as a positive outcome, especially if accompanied by a reduction of the already-imposed tariffs or at least a delay in imposition of new tariffs as planned by the Trump Administration.

Bulls edging it due to momentum amid dovish central banks

It could be a long wait but we think that equities will probably push higher than lower as we get closer to the G20 summit, given the bullish momentum from last week and the recent sharp falls in bond yields amid dovish central bank action. With that in mind, European stocks indices could be in for a breakout from their small consolidation pattern that they have been stuck inside over the past few days, following the burst of momentum EU stocks received from the ECB president Mario Draghi’s dovish comments last week, and the small follow-through in reaction to the Fed’s indication over a potential rate cut in July.

My favourite European index - the German DAX - needs to hold support in the 12130-12225 area it has now dipped into. This was formerly a key resistance zone. This year’s high comes in at 12454, and the liquidity above that level is where the bulls could target next. However, in the event the bullish momentum completely runs out of juice and we break the most recent low at 11985, then that would be a bearish development - this scenario could play out if trade talks collapse at the side-lines of the G20 summit. 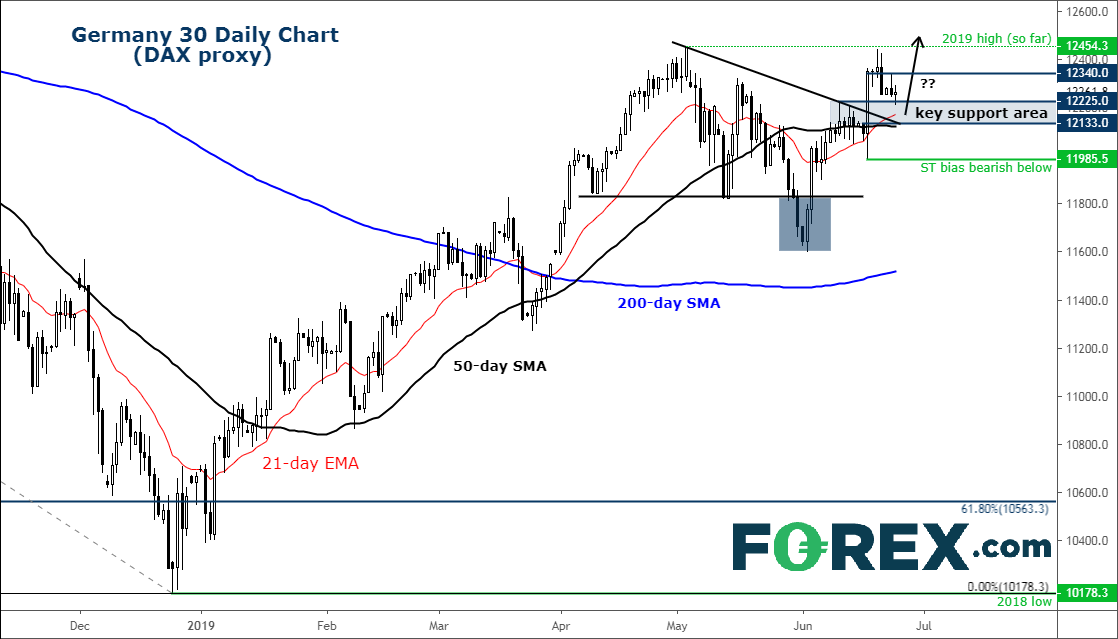 Source: Trading View and FOREX.com. Please note, this product is not available in all regions.