Next week will see the earnings season kick into a higher gear, so there should be more volatility for the stock markets.

As we had warned in our weekly outlook last Friday, this week’s lack of significantly important data was by no means an indication for volatility. We were concerned about an equity market sell-off after the major US indices had stalled at record highs following the upsurge in government bond yields and despite recent concerns about trade disputes between China and the US. As it turned out, unfortunately our concerns were realised and the markets endured one of their worst sell-offs this year, in mid-week. Things had calmed down a little on Friday as short sellers probably took profit ahead of the weekend, but given the technical damage on major indices we think more losses could be on the way for stocks in the near-term outlook – if not later on Friday then perhaps early next week.

Next week will see the earnings season kick into a higher gear, so there should be more volatility for the stock markets. Also, the economic calendar is a little bit busier than it has been this past week with at least one potentially market-moving data release scheduled for release in each day of the week. So, FX traders will have lots to look forward to as well as the stock market participants.

Among the key company earnings next week, Bank of America will report its results on Monday, while Tuesday will be a massive day for banks and some technology companies as Goldman Sachs, Morgan Stanley, Johnson & Johnson, Black Rock, United Health, eBay, IBM and Netflix all publish their results. Wednesday will see U.S. Bancorp produces its numbers ahead of Bank of New York Mellon on Thursday, which is when PayPal and American Express will also report their results. Then on Friday we will have results from Procter & Gamble, State Street Corp and Honeywell International.

Thanks to Trump’s corporate tax cuts, a healthy economy, and to not to mention the recent upsurge in oil prices and share buybacks, third quarter US earnings are expected to be strong once again.  According to FactSet, the S&P 500 is expected to post earnings growth of 19.2% and revenue gains of 7.3% for the third quarter, following a 25% rise in earnings and a 10% increase in revenues in Q2. FactSet thinks the energy sector will produce the best earnings and revenue growth this reporting season.

Meanwhile on a macro level, things will kick off with US retail sales on Monday followed late in the day by New Zealand GDP (Early Tuesday NZ time). Then we will have the first of the three major UK economic data releases on Tuesday as the ONS publishes the latest wages data. On Wednesday we will have the UK CPI measure of inflation followed by retail sales a day later on Thursday. Also on Wednesday, we will have the FOMC’s last meeting minutes, while Australian employment figures will be released on Thursday. Friday will see the release of Chinese GDP and Canadian CPI and retail sales.

So, there’s plenty to look forward to next week and hopefully we could see more than just a “risk-on-risk-off” types of moves in the FX markets.

From above it is clear that there will be more key data releases from the UK next week than anywhere else, which therefore means the pound will be in sharp focus. Sterling has been on an uptrend in recent weeks, making back a big chunk of its recent losses against the dollar while doing particularly well against the euro. It is all to do with optimism that the UK and EU are close to forming an agreement over Brexit. In the event there is more progress then we should expect to see the pound remain bid.

But once again, the stock markets could trump any volatility we may see in the FX markets given this week’s developments and next week’s upcoming earnings results. If further losses are seen for the global indices then once again the USD/JPY and yen crosses could be the main focal point for FX traders. Meanwhile in commodities markets, gold looks like it could expand further to the upside after its breakout above the key $1205/$1215 resistance level on Thursday while crude oil is in danger of breaking down after major oil forecasters revised downwards their demand growth projections. 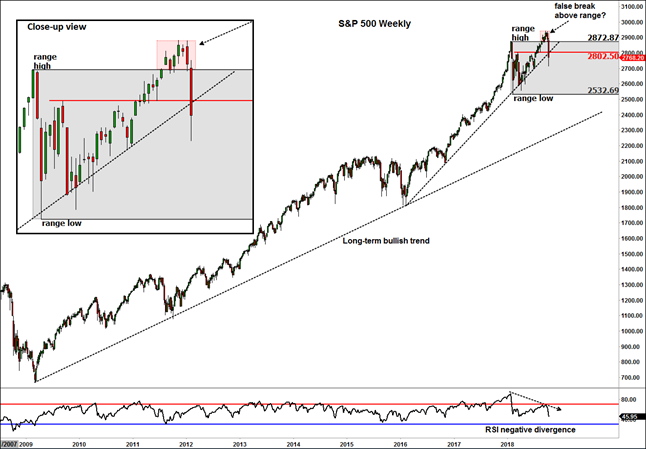