Recession fears are back in town following this morning’s publication of very poor manufacturing data from the Eurozone’s largest economy.

Recession fears are back in town following this morning’s publication of very poor manufacturing data from the Eurozone’s largest economy. Dr Copper was not happy; stocks and EUR/USD dropped, and haven flows into bonds caused yields to weaken, which in turn supported gold prices even further.  But equity indices managed to bounce off their lows as the session wore on. It remains to be seen whether recession fears will continue to dominate sentiment as we head towards the US open, given all the central bank largess. One other reason to for the stock market bulls to remain hopeful is that although the Eurozone is clearly struggling, it is worth remembering that the US economy is still relatively unscathed by its ongoing trade spat with China. And if the world’s two largest economies manage to finally end their trade war next month, then sentiment could turn positive quickly and we may even see a rebound in the export-oriented German economy, too.

But for now, the German economy just cannot catch a break and the latest purchasing managers’ index data from the key manufacturing sector underscores fears that it is headed for a recession. The PMI fell to 41.4 in September, down from 43.5 the previous month and well below 44.6 expected. This was the lowest level since 2009. The German PMI weighed on the Eurozone average, which held below the boom/bust level of 50.0 for the eight-consecutive month at 45.6. The German and Eurozone services PMIs also disappointed expectations, although they remained above the expansionary threshold for now at 51.6 and 52.0 respectively.

So, it hasn’t been a great start for data in what will be a light week for the economic calendar. But with geopolitical tensions heating up, Brexit becoming more uncertain and US-China trade spat ongoing, there’s plenty to look forward to this week. Amidst all the uncertainty, one thing is definitely certain: central banks will be here to support the markets in the form of keeping monetary policy extra-ordinary loose – as we found out last week. For that reason, we may not see the full impact of the economic slowdown in the markets, especially stocks.

Indeed, the German DAX index has not completely broken down despite today’s sizeable retreat. It comes on the back of a large rally that began in august. So, this could just turn out to be a mere retracement rather than a full-blown reversal. Time will tell. Watch the index closely over the coming days to get a better signal.  For now, key support levels such as 12275 remain intact. 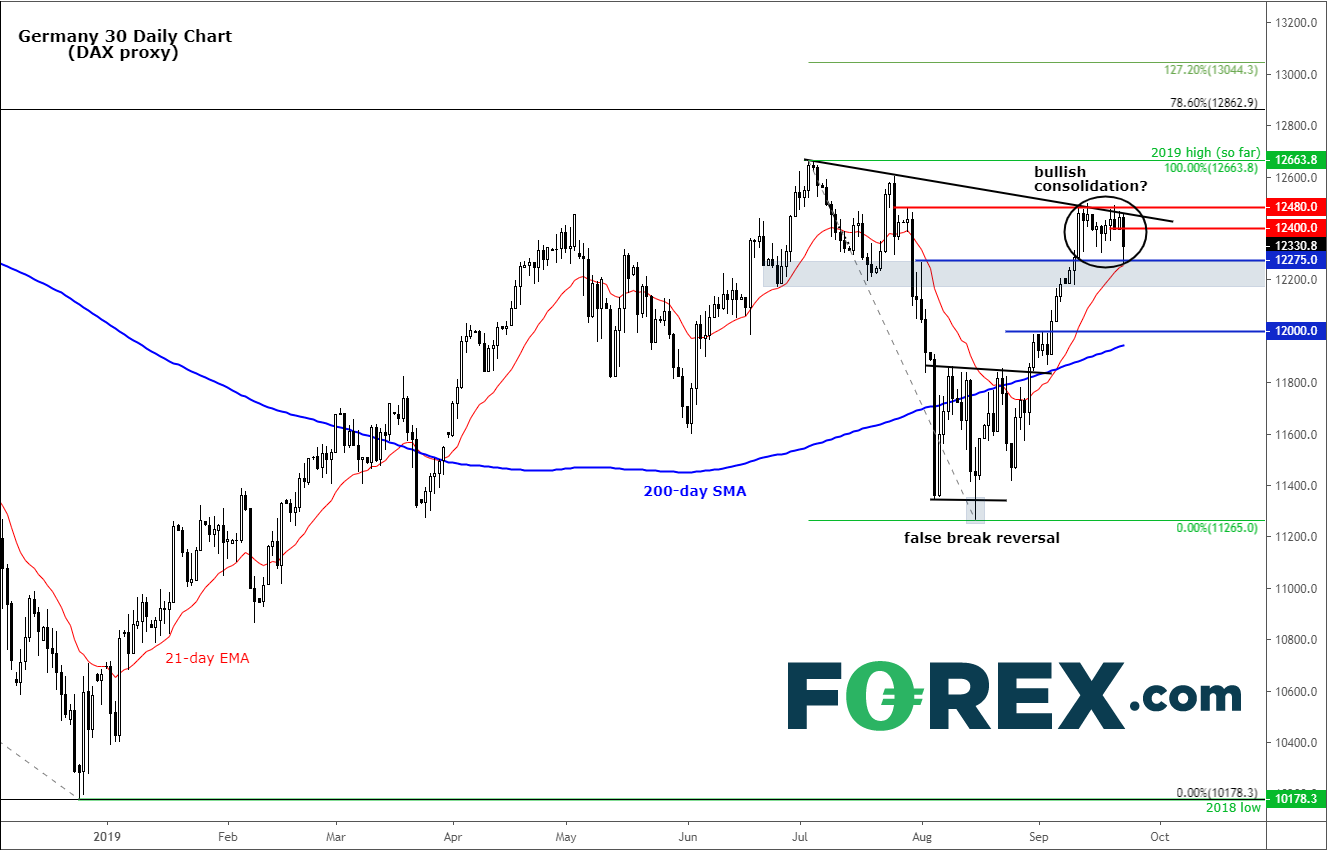