The biggest story in the markets right now is that China seems to have blinked first in its trade dispute with the US. Global stock markets, led by China, and base metal prices have all staged a relief rally as a result.

The biggest story in the markets right now is that China seems to have blinked first in its trade dispute with the US. Global stock markets, led by China, and base metal prices have all staged a relief rally as a result. The firmer metal prices and positive risk sentiment has helped to boost the Australian dollar in particular.

Although China retaliated yesterday to the latest imposition of tariffs by the US, Beijing nevertheless sharply slashed its tariff rates on imports of US goods compared to what it had proposed previously. So, China in particular appears willing to talk and this has boosted speculation among market participants that an agreement will be formed at a not-so-distant future despite the growing trade dispute.

Sentiment has been further boosted after China’s Premier Li Keqiang pledged a series of pro-business policies overnight. Among the measures, the equal treatment for foreign investors is a blatant effort to retain investor confidence in the wake of the growing trade dispute with the US. Meanwhile yuan devaluation talks came back into focus after Li Keqiang said that China won’t devalue its currency to stimulate exports.

The Chinese Premier was speaking at a World Economic Forum event in Tianjin and his comments were cheered on by the Aussie bulls in particular, although the kiwi also gained ground.

Despite the tariffs, China's exports haven't slowed down to worrying levels just yet. In August, exports in dollar terms showed a growth of 9.8% year-on-year. Although this represents a slowdown from July's 12.2% reading, it is still a relatively strong number.

For China, which is fast becoming a consumer nation as opposed to just a producer, it does not make sense to devalue the yuan extensively in the wake of the ongoing trade war. Indeed, Chinese imports in August grew by whopping 20.0% year-over-year in dollar terms.

The AUD/USD may have formed a false break reversal pattern when it refused to hold below the 2017 low earlier this month. While the downward trend is still intact, a few resistance levels have now broken down, reducing the bearish pressure. The bulls are happy for as long as rates now remain above last year’s low at 0.7165/70 area, and ideally above the now broken resistance levels such as 0.7215.

At the time of writing the AUD/USD was probing liquidity above 0.7250 resistance with the bulls keeping an eye on the next level of potential resistance at 0.7310. The latter is where the 50-day moving average meets the bearish trend line.

We would turn decisively bullish in the event the Aussie breaks its bearish trend and ideally climbs above the most recent high at 0.7380 – for then we will have our first higher high in place. With the other major commodity pair CAD/USD (i.e. USD/CAD inverted) already breaking higher, sentiment towards the Aussie could improve going forward. 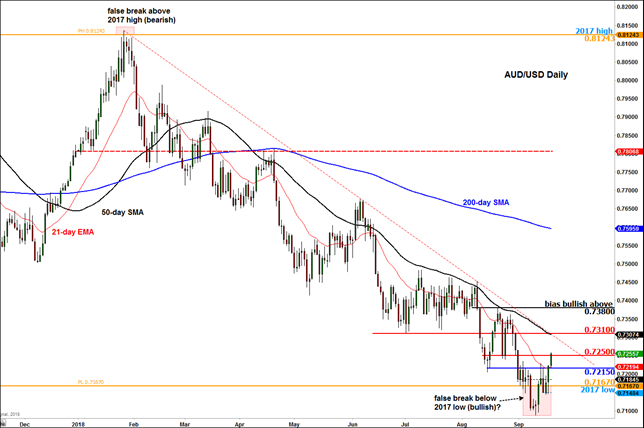