After yesterday’s big sell-off, European equities have bounced back and US index futures point to a higher open on Wall Street. It will be in interesting to see if there will be further follow-through in the selling pressure once Wall Street opens, or if that was it for the sell-off. It is the last day of the week, month and quarter, so the impact of profit-taking and portfolio rebalancing by fund managers should have some impact on the markets.

After yesterday’s big sell-off, European equities have bounced back and US index futures point to a higher open on Wall Street. It will be in interesting to see if there will be further follow-through in the selling pressure once Wall Street opens, or if that was it for the sell-off. It is the last day of the week, month and quarter, so the impact of profit-taking and portfolio rebalancing by fund managers should have some impact on the markets.

But generally speaking it looks like investors are slowly coming to the realisation that the era of extraordinary-loose monetary policy has come to an end. For a long time, global central banks have been able to keep interest rates near zero and quantitative easing at full throttle as the high levels of unemployment and the slack in the economy meant that inflationary pressures were weak or non-existent across many developed economies. Central banks' huge programmes of asset purchases had allowed many market participants to basically front run them. The vast amounts of bond buying had pushed yields on government debt to extremely low and in some cases negative levels, which in turn supported higher-yielding assets such as stocks.

But inflation has made a somewhat dramatic return across many developed economies, most notably in the UK where CPI has risen to 2.9% year-on-year, which is well above the Bank of England’s 2% target. Fresh data from Eurostat revealed this morning that inflation in the Eurozone has eased back a tad to 1.3% in June from 1.4% the month before, but this was still stronger than 1.2% expected. In the US, inflation has been hovering around 2% for several months, though it has eased in each of the past four months from a high of 2.7% to 1.9% in May. If inflation continues to remain at around these levels or push higher, monetary policy could tighten in the Eurozone and the UK, while the Fed may raise interest rates again. Consequently, bond prices could weaken as yields rise on expectations of tighter monetary policy. This in turn could undermine stocks.

However, it must be noted that bond prices and stocks will not always correlate positively. After all, higher bond yields tend to be positive for banks’ profits. So, if bond prices fall, bank stocks should outperform most other sectors. Meanwhile with crude oil also stabilising, energy stocks could also outperform. So, there are reasons to be optimistic about equities or certain sectors, but generally speaking the markets do certainly look mature at the time when central banks are abandoning their dovish stances.

DAX drops to a key support level: will the buyers hold or fold?

We are not calling a top for the markets, but things could turn ugly if more support levels break down. In Europe, the big sell-off yesterday saw the German DAX index drop to a key support level around 12370-90. This area was the old all-time high and resistance prior to the breakout back in April. Once resistance, it has turned into a bit of support. Going forward, if this 12370-90 area gives way then we could see the start of a deeper correction. In this potential scenario, the void above 12160 could certainly be filled and things could turn ugly if prior low at 11941 breaks – this by the way would create the first lower low, objectively ending the bullish trend.  Meanwhile the next immediate resistance to watch on the weekly time frame is between 12620 and 12680 – the last support area before this week’s drop. 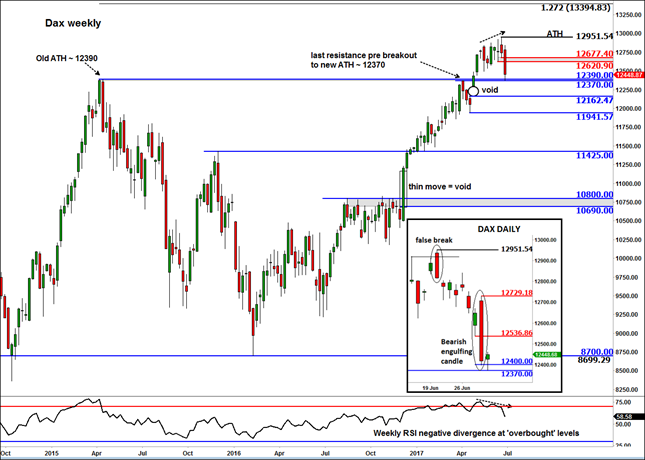