After yesterday’s sizeable drop on Wall Street, which saw the Dow plunge over 350 points from its high to the low, US index futures have bounced back strongly.

After yesterday’s sizeable drop on Wall Street, which saw the Dow plunge over 350 points from its high to the low, US index futures have bounced back strongly. Investors, who have repeatedly ignored warnings that stocks – especially in the US – are considerably overvalued both from technical and fundamental points of view, are doing it again, it seems. At the time of this writing, the Dow futures were up a cool 130 points while S&P futures were 9 points higher. But it remains to be seen whether the sellers will step in again after Wall Street opens for trading later.

One could actually argue that a correction on Wall Street is almost imminent. After all, with key central banks recently reducing their monetary stimulus (which had boosted risk assets in the first place), the current low volatile conditions disguise risks facing the markets. Yesterday’s big drop on Wall Street is a reminder that the markets can actually go down as well as up! As the markets have been accelerating to the upside, with the Dow scoring its fastest 1000-point gains, we have turned increasingly cautious as this sort of momentum doesn’t usually end well — think Bitcoin when it was approaching $20K or silver back in 2011 when the euphoria ended abruptly just ahead of $50. Precious metals have actually ignored the gains on Wall Street with gold ending last year higher. The metal has started this year on the front foot again. Although gold hasn’t performed as well in euro and pound terms as it has done so against the dollar; this is only because of the ongoing strength in the EUR/USD and GBP/USD exchange rates. Nonetheless, the fact that gold is still up against these currencies goes to show that there is internal strength in the precious metal. Perhaps this is because of investor concerns that either global inflation is on the rise or a correction in the stock markets may be imminent, which shouldn’t really surprise anyone given the extent of the rally on Wall Street despite the Federal Reserve, Bank of Canada and Bank of England reducing monetary stimulus or tightening interest rates recently. The Bank of Japan has reduced its monthly bond purchases slightly and there is growing pressure on the European Central Bank to tighten its belt, amid growing improvement in economic conditions across the Eurozone. The recent upsurge in oil prices suggest inflation may rise further, which could encourage central banks to further reduce monetary stimulus. This can only be bad news for overbought equities. Meanwhile the fourth-quarter earnings season has just started and so this should help provide some direction for the markets, or at least individuals companies, in the short-term. If company results show weakness then this could trigger the drop that we are anticipating.

But so far, every single dip has been bought, so to suggest that the markets have topped just based on Tuesday’s price action is a bit premature. It remains to be seen whether the open on Wall Street today will encourage further selling or see the buyers return once again given the slightly calmer conditions in early European trading. But with the S&P’s distance from the 200-day average growing by the day, the potential for mean reversion is growing. As per the chart of the S&P futures, a 10% drop could push the index back down to the 200-day moving average. If the bears have any hope of seeing that sort of a drop, they will need to push the market below some key support levels now. First and foremost they will need to see the index trade back below Tuesday’s closing level. After that, they will need the S&P to hold below supports at 2770 and 2752 next, levels which were previously resistance. But even then, the pullback could end at the next key support of around 2698. This will still represent a sizeable drop. However bullish bets would be off in the event the S&P goes back below the opening level for the year at 2675. Meanwhile if the index manages to break above Tuesday’s record high of 2808 then the Fibonacci extension levels at 2819 (127.2%) and 2832 (161.8%) could be the next objectives for the bulls. 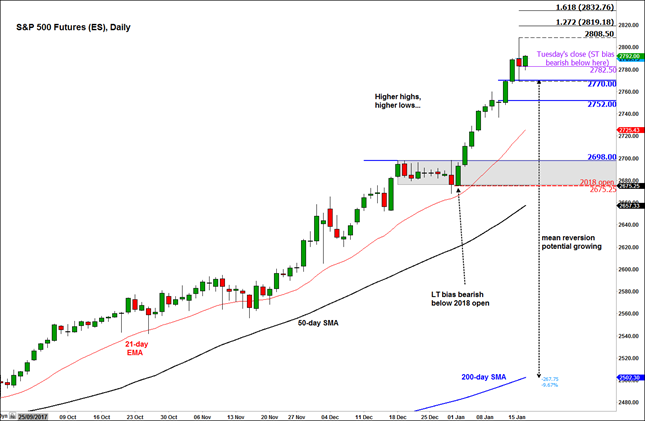