Stocks rise as yields and dollar drop after midterms

So far, the reaction of the markets to the outcome of the US midterm elections has generally been how we had envisaged: the US dollar and bond yields coming under pressure and gold gaining ground. Stocks, meanwhile, have responded positively – at least for the time being.

So, in a blow to US President Donald Trump, the Democrats have taken back control of the House of Representatives. So far, the reaction of the markets to the outcome of the US midterm elections has generally been how we had envisaged: the US dollar and bond yields coming under pressure and gold gaining ground. Stocks, meanwhile, have responded positively – at least for the time being. Although the Federal Reserve will most likely still go on to hike interest rates for the fourth time this year in December, the reaction of the markets suggests that investors are perhaps expecting future inflationary pressures to just ease slightly under a divided government. Trump’s plans to further cut taxes and raise government spending may be difficult to pass now. This may mean slightly less aggressive Federal Reserve rate hikes in the future than would have been the case had the Republicans retained control of both houses.

While the dollar has reacted in the way you would expect (negatively – see the Dollar Index chart, below), equity markets have responded positively for now with US index futures pointing to a higher open on Wall Street. This is despite the fact that a divided government brings with it uncertainty. Usually, the stock market does not like uncertainty, especially if the political gridlock point to slowing of market-friendly policies such as deregulation and tax cuts.

In this case, therefore, market participants must be responding to the prospects of interest rates potentially rising more slowly going forward. Indeed, we have seen, on at least two occasions this year, vicious selling of equity indices each time the 10-year bond yield has risen sharply. This makes sense when you consider the fact that emerging market currencies have also rebounded, boosting the appetite for riskier assets.

Another reason why we have seen a positive response in equity markets could be due to the fact that it will now be extremely difficult for the Democrats to retake the Senate in 2020. This would leave the business-friendly Republicans in control and even if the Democrats were to win back the presidency, there will be little hope for them of implementing campaign promises as they could get blocked by the Republican-controlled Senate.

However, we wouldn’t be surprised if equities were to come under pressure should political uncertainty rise further and lead to a proper turmoil on Capitol Hill. With the Democrats in control of the lower chamber, we could now see the opening of several Congressional investigations into Donald Trump’s business dealings and alleged collusion between Russia and his presidential campaign staff.

If these potential investigations were to reveal anything alarming then the Democrats could initiate impeachment proceedings against Trump, although with the Senate dominated by the Republicans this might not lead to anything significant. Still, even the threat of such an event could be enough to send stocks tumbling.

For now, though, our S&P 500 proxy suggests the index will open at around 2784, which would be up a good 28 or so points (~1%) from yesterday’s close. Obviously, this is subject to change as we are still about 3 hours away from the open. While the recent recovery has pushed the index above key resistance levels, meaning the short-term bias is bullish again, further hurdles lie ahead. Among these, the area around 2812-22 is very important as we have an old high, 61.8% Fibonacci level and the 50-day moving average all converging there. The point of origin of the last breakdown comes in around the 78.6% Fib level at 2868, which could be an even stronger resistance level to watch. Support now comes in around 2761-2766 area, which was resistance previously. But if this area fails to hold the market up then we would be on the lookout for a potential move lower, with the old short-term low at 2713 being the pivotal level now – below this and we are bearish again. 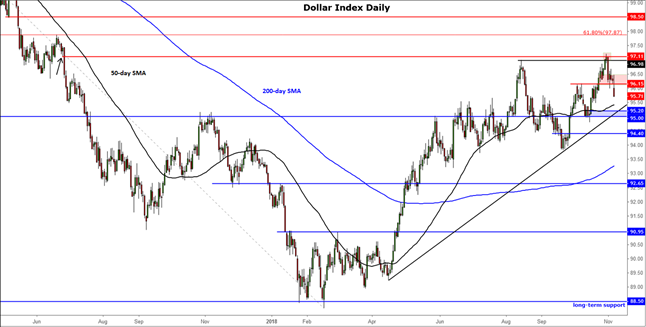