Stocks struggle to sustain gains as risk of correction grows

With US stock markets holding near their all-time highs and volatility being suppressed to record low levels, I just can’t help but feel investors are becoming unjustifiably complacent. Valuations have already become overstretched and at some point even the most bullish of market participants will have to accept that. A growing number of analysts agree that the bullish run cannot continue rising at this pace for much longer, at least without a sizeable correction of some sort.

One also has to remember that the number one reason why stocks are where they are is because of the unprecedented era of cheap central bank money flooding the financial markets. But with the Federal Reserve set to normalise its balance sheet, monetary conditions are going to tighten in the US. While the Bank of Japan will pick up the slack, a growing number of other central banks are turning or have already turned hawkish. The Bank of Canada has already started raising interest rates, while the Bank of England is set to do so in the coming months. The European Central Bank will likely announce the start of its own QE tapering soon.

As major central banks slowly unwind their government bond purchasing, yields should begin to rise. Rising bond yields will make the equity markets increasingly less appealing to yield-seeking investors. As a result, we may see the start of a bear market that could potentially last several months. For this thesis to be validated, though, we do need the markets to speak. So, any potential sharp sell-off going forward should be treated with more respect than has been the case in the previous years, because unlike then key central banks have started to tighten their belts now.

From a technical perspective, the S&P 500 has already exceeded the measured-moved objectives from its long-term previous ranges, as indicated on the weekly chart, below. The benchmark stock index is also looking extremely overbought, as it hovers near the top of its multi-year bullish channel. Meanwhile the momentum indicator RSI is in a state of negative divergence with the underlying index, suggesting the bullish momentum is fading. While the markets could still push higher over time, the technical indications – and the abovementioned fundamental considerations – suggest that a correction is looking increasingly likely now. 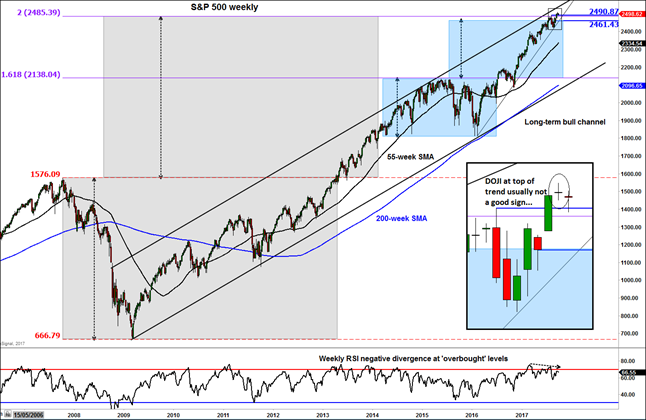