Stocks Surge on US-China Ceasefire, But Bonds Aren’t Buying It

In exchange for the US agreeing postponing the scheduled escalation of tariffs (from 10% to 25%) for 90 days, China agreed to "purchase a not yet agreed upon, but very substantial, amount of agricultural, energy, industrial, and other products from the United States to reduce the trade imbalance.” Ideally, the two sides will be able to reach a longer-term trade agreement over those 90 day; in other words, this is not a suspension of the trade war but a suspension of the escalation of the trade war.

Nonetheless, investors have generally cheered the outcome, with the trade-dependent commodity currencies gaining 60-80 pips against the greenback, global stocks rising across the board, and oil rallying 3%. Interestingly, the yields on Treasury bonds are flat to falling across the curve, signalling that the  “smartest market” is more skeptical that the weekend’s developments mark a turning point.

To wit, the benchmark 10-year Treasury bond is back to yielding just 2.99% after a brief gap higher to start the week. This level is exactly where the market closed Friday and represents the lowest interest rate since mid-September. While we’re generally cautious about technical analysis on fixed income markets, the yield appears to have formed a “double top” pattern around 3.25% earlier this quarter, suggesting that we could have further to fall from here. 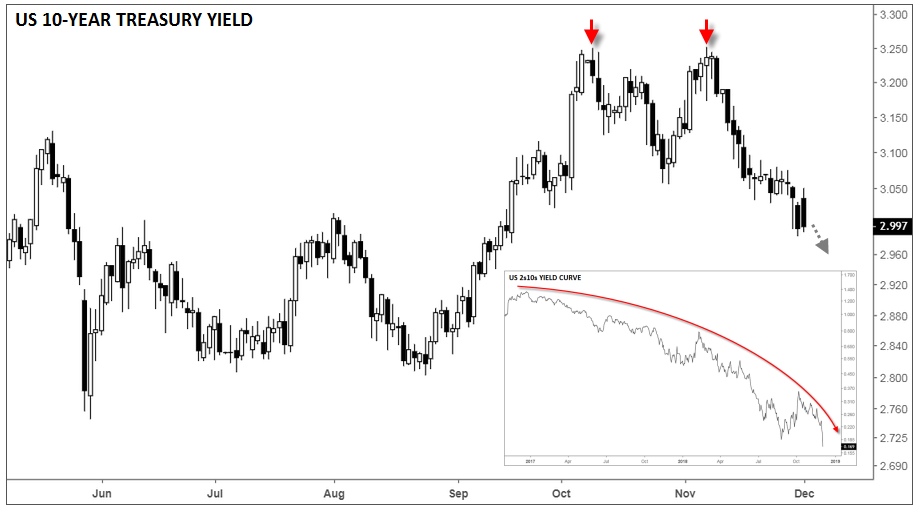 Concerningly, the yield on the 2-year Treasury is holding up better than the 10-year yield, meaning that the yield curve continues to flatten. For the uninitiated, the yield curve is a widely-watched indicator of an economy’s health. Historically, inversions in the yield curve (when the 2-year bill has a higher interest rate than the 10-year bond) have led to recessions. As the inset chart above shows, the widely-watched 2s10s spread has fallen to just 17bps, its lowest level since 2007. Basically, bond market traders are concerned about the longer-term prospects for the US economy, especially with the Fed on track to raise interest rates again next week.

Given its well-established trend, we expect the yield curve to continue to flatten and potentially invert as soon as next year. Of course, there’s no guarantee that the yield curve will invert, or that it will necessarily lead to a US recession even if it does. Nonetheless, with stocks and other risk assets in full-on rally mode, it’s important to note that the bond market is waving a big yellow flag. Unless we start to see interest rates participate in the post-G20 risk asset rally, bulls may want to tap the brakes on their optimism.