USD/CHF about to rip?

The USD/CHF remains fundamentally supported with the US Federal Reserve being the most hawkish central bank out there, while the Swiss National Bank being among the most dovish.

The USD/CHF remains fundamentally supported with the US Federal Reserve being the most hawkish central bank out there, while the Swiss National Bank being among the most dovish. The perceived safe haven Swiss franc is currently also undermined by rising equity prices around the globe, which is also undermining gold prices. And with the Dollar Index potentially on the verge of a comeback after its decline since the turn of the year, we are now expecting to see the USD/CHF push higher.

The key risk to this forecast is if we see a sudden rise in risk aversion, or if some significantly weak US macro data causes the Fed to postpone its plans of reducing its balance sheet. The latter seems unlikely. One thing that could underpin safe haven assets across the board would be a stock market correction, which many believe is now long overdue. However, so far there are no signs that the stock markets are about to top out. So, all else being equal, the USD/CHF “should” push higher from here.

Indeed, the technical outlook is also improving for the Swissy. The recent break above the 0.9770 resistance more or less confirmed the reversal we saw around the 2016 low of 0.9445 area earlier last month. Now that the USD/CHF is above this level again, it may begin to climb towards its next reference points, starting at 0.9850, followed by 1.0050 next.

Meanwhile the bears would like to see a clean break below 0.9670, which was the low prior to the latest rally. If this level breaks then another attempt to take out the 2016 low could be on the cards next. 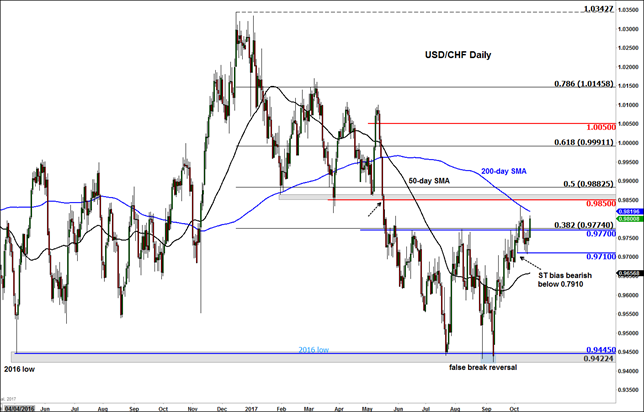