Welcome to Technical Tuesday, a weekly report where we highlight some of the most interesting markets that will hopefully appease technical analysts and traders alike. In this week’s edition, we are getting technical on the DAX, Gold and EUR/USD. So, there’s something for everyone.

The DAX has fallen sharply over the past several days, along with global indices. The big upsurge in inflation has caused panic among global central banks, as they rush to tightening their policies in order to help bring price levels down. Investors, in turn, are seeing their portfolios suffer sizable losses, causing them to reduce their risk, which is further fuelling the sell-off. As more and more technical levels break down, we are seeing more and more conviction from the bears to ramp up the pressure. On the German index, the latest support area to break down was around 13680 to 13830 on Monday. As per the chart, this zone also converged with the short-term bullish trend line. But now that the trend line has broken down on a daily closing basis, this has paved the way for potentially more losses: 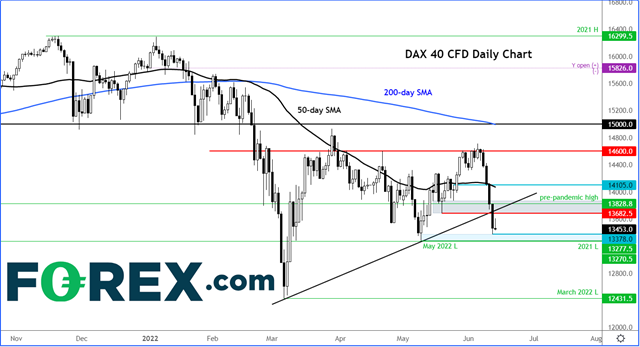 The bears are now targeting the liquidity resting below the May low around 13270, a level which also happens to be the low from 2021. If the index goes below here and there’s acceptance below it, then we could see a quick follow-up move down the March lows around 12430ish next.
The alternative that could set up is the potential for the bulls to reclaim the above-mentioned broken support in the 13680 to 13830 range. If that were to happen, we could see the onset of a sharp short-covering rally.
That being said and given the overall bearish price action and a negative macro backdrop – with interest rates and economic worries both on the rise – I continue to favour the bearish over bullish setups.

Gold did it again. A rug pull that is. On Friday, it created a “perfect” bullish-looking candle on the daily time frame off the 200-day moving average and with price also reclaiming the broken trend line around the pivotal level of $1850. It looks like a great setup. Only, it happened at a time when both bond yields and dollar rose. This meant that not many people believed it will follow-through. Those guys must have sold hard into the open on Monday, for gold barely moved above Friday’s high before slumping: 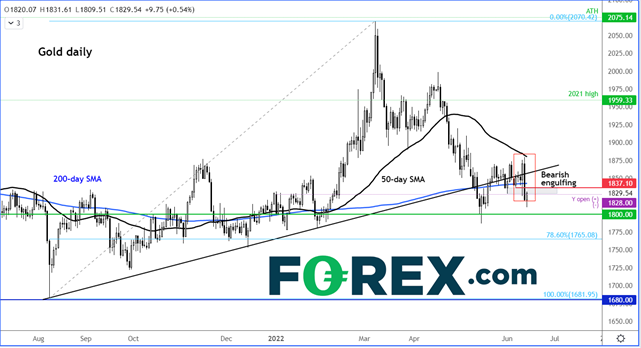 The net result is that gold has now created a large bearish engulfing candle eon the daily time frame. This points to a potentially sizeable drop. Thus, I see today’s small rebound as another bull trap, and therefore a potential shorting opportunity for the bears. From here, gold could easily revisit $1800, but it may not stop there. The 78.6% Fibonacci retracement level around $1765 is the next downside target.

Okay we don’t always just look at the daily time frames. If you trade on the lower time frames then you will notice that the EUR/USD is testing a key resistance area here: 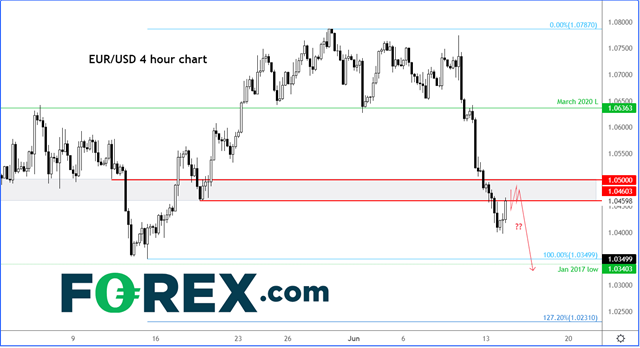 The 1.0460-1.0500 area had acted as both support and resistance in the past. But as the ECB was less hawkish last week than expected and given expectations over further sharp rate hikes from the Fed, the EUR/USD has fallen along with everything else in the past few days. It moved below the abovementioned area on Monday and it is now re-testing it from underneath.
If resistance hold here as I suspect that it might, then I would expect to see a continuation lower to a new multi-year low. Next up on bears’ target is the 2017 low at 1.0340. But there’s no major reason why it should stop there, apart from profit-taking ahead of the FOMC meeting.
TAGS:
Dax Trade Ideas
Share: