Tesla (TSLA) tanks: Was that THE top?

The current selloff is more substantial than any of the pullbacks over the course of the shares’ breathtaking 1,000% rally...

One day you’re on top of the world, the next you’re merely the planet’s second-richest person.

Elon Musk, the mercurial and relentlessly optimistic founder and CEO of Tesla Motors (TSLA), may have flown a bit too close to sun this weekend. Despite news that the company added $1.5B of the cryptocurrency Bitcoin to its corporate treasury last month, Musk tweeted over the weekend that the price of Bitcoin “seemed high,” a comment that some analysts are attributing to Bitcoin’s -20% correction over the last two days.

More relevant to TSLA’s actual business, BMW CEO Oliver Zipse publicly commented at a conference earlier today that “It won’t be easy for Tesla to continue at that speed because the rest of the industry is moving ahead big time.” More than volatile day-to-day fluctuations in cryptocurrency that represents just 0.2% of Tesla’s market capitalization, the risk of increasing EV competition from established automakers represents a serious threat to Tesla’s position and could erode Tesla’s ‘first mover’ advantage. Recent news that Tesla was lowering prices on its Model 3 and Model Y vehicles reinforces the perspective that competition in the space is rising sharply.

After failing to break above $900/share repeatedly over the last six weeks, TSLA has rolled over to test its lowest levels of 2021. More significantly, the stock is trading well below its 50-day EMA for the first time since April, and its 14-day RSI is probing oversold territory, signaling that the current selloff is more substantial than any of the pullbacks over the course of the shares’ breathtaking 1,000% rally off the COVID-panic lows last March: 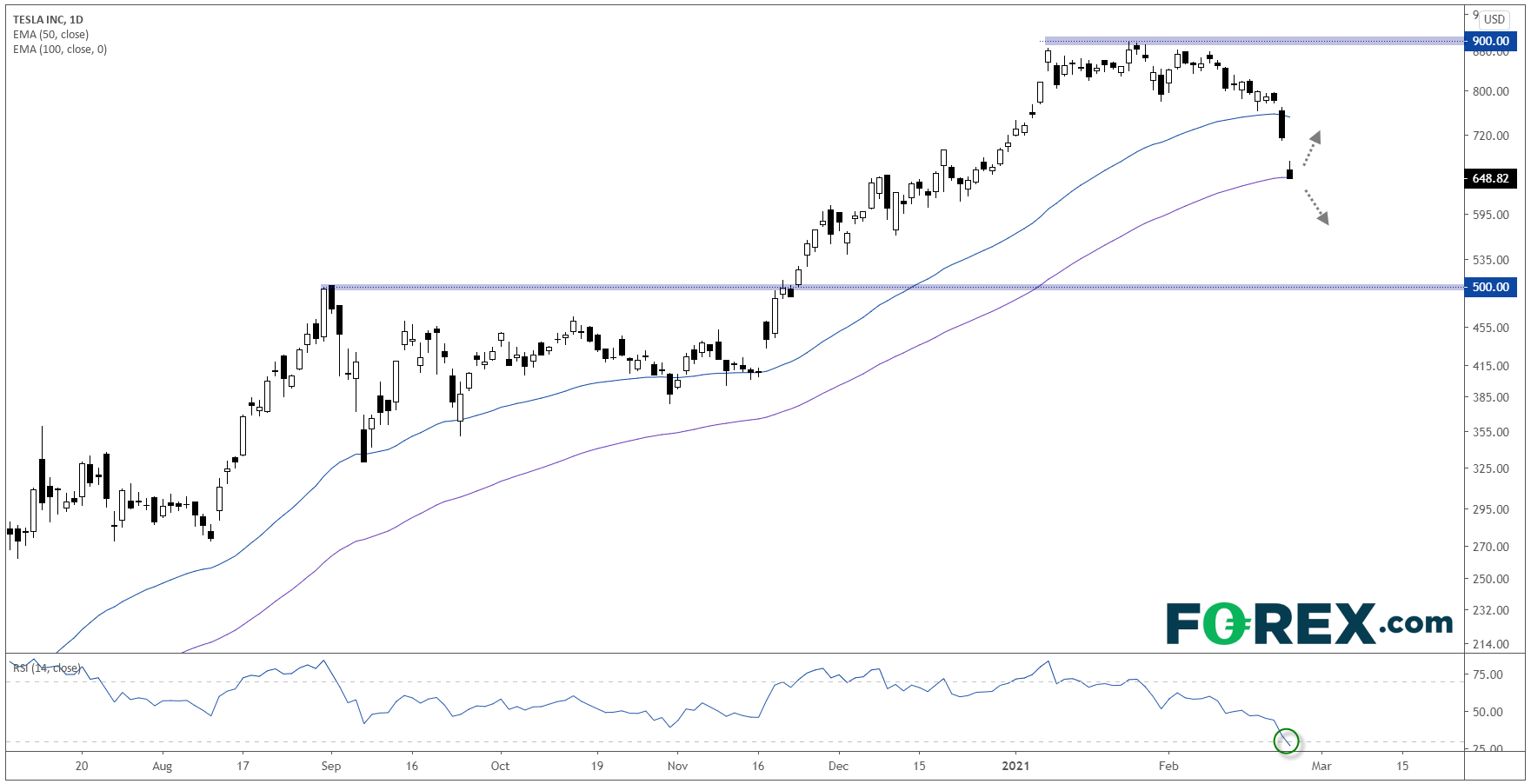 Looking ahead, the next key level of support to watch will be the 100-day EMA near $650. If that level breaks, the selloff could extend toward previous-resistance-turned-support at $500. While a 45% drop from the highs is certainly nothing to sneeze at, it’s worth noting that the stock first crossed $500 just three months ago, so long-term holders would still be in profit on their positions even then.

Meanwhile, bulls will be looking to see if TSLA can regain its 50-day EMA near $750 as a sign that the buying momentum is returning.