The ‘Central Bank of Erdogan’ Sharpens its Rate-Cut Knife

Turkey’s central bank announce their rate decision at 11:00 today. And, if prior meetings are anything to go by, we suspect it will be another lively one.

Erdogan’s unorthodox approach to combating rising inflation shows no signs of abating, as traders brace themselves for another rate cut today despite double digit inflation. For comparison, the traditional approach is to increase rates to fend off rising prices, but that’s not how it works at the Central Bank of Erdogan.

Officially known as the Central Bank of the Republic of Turkey (CBRT), President Erdogan is effectively pulling the strings of monetary policy by replacing Governors that don’t obey his command. His newly ‘elected’ officials cut interest rates by 200 bps in October despite inflation rising to 20%. And they’re expected to cut rates again today, after the self-proclaimed ‘enemy of interest rates’ vowed to fight interest rates “to the end”.

Now, we’re not quite sure where “the end is” in Erdogan’s mind, but why stop at 0% interest rates when other central banks are at negative elsewhere? Of course, we really don’t think rates will go negative (although we probably shouldn’t put it past him), but at 16% there is plenty of scope to slash rates further. And whilst the consensus is once again for a 100-bps cut today, Erdogan is not a consensus kind of guy, so we’re prepared for another aggressive cut. And whilst it is unlikely to tame inflation it could contribute to further currency depreciation over time.

We can see that USD/TRY is in a multi-year uptrend and a main driver has been due to Turkish Lira depreciation, regardless of where rates are in their cycle. Yet weaker rates simply exacerbate the issue of a weaker Lira and, at 16%, rates remain at relatively high levels which allow for multiple cuts and a presumably much lower currency. 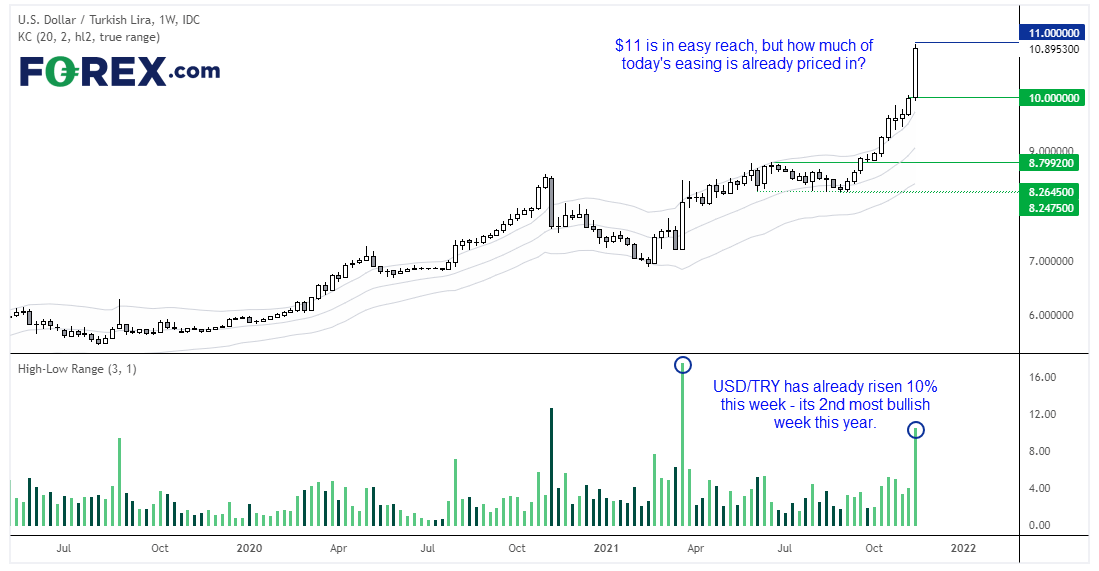 But how it plays out today is another question. USD/TRY has rallied over 10% this week alone during its second most bullish week this year. And unlike the previous two meetings, the pair has not retraced leading up to today’s. So there is less of an element of surprise heading into today’s announcement whist USD/TRY been both volatile and bullish in anticipation of a cut.

We think the biggest upside risk to the Lira today is a surprise hold today from the central bank. And that’s not looking very likely. But traders would be wise to remember that volatility cuts both ways, and it’s the non-consensus move that provides the more volatile reaction, usually against the current trend. And some traders may want to book profits when the rumour becomes the fact.