The State of Bitcoin and the Cryptoasset Market, Q3 2018

It’s been less than nine months since traders flipped their calendars to 2018, but cryptoasset bulls have aged years (if not decades!) since the holiday season’s euphoria.

It’s been less than nine months since traders flipped their calendars to 2018, but cryptoasset bulls have aged years (if not decades!) since the holiday season’s euphoria. After peaking at a total market cap above $800B on January 7th, the crypto market has contracted precipitously, briefly falling below $200B earlier this week:

Of course, cryptoassets are infamous for its massive bull-bear cycles, and the 2018 bear market is hardly unprecedented. Back in December 2013, total cryptoasset market cap peaked above $15B, up nearly 2,000% from the summer’s lows, before collapsing to just over $3B in January 2015. Based on the template of a full-year, 80% decline in the market, further declines cannot be ruled out.

Over this period, we’ve seen the Bitcoin’s “dominance”, or Bitcoin’s market capitalization as a proportion of the total crypto market’s capitalization, steadily grind higher:

In other words, Bitcoin (-70% from its peak) has held up relatively well compared to altcoins like Ether (-80%), Litecoin (-85%) and Ripple (-91%). Looking at these figures, an old investing joke comes to mind: “What do you call a stock down 90%? A stock that was down 80% and then got cut in half!” In order to help our readers minimize the risk of seeing their investments get cut in half, we analyze bitcoin from a fundamental, sentiment, and technical perspective below:

As a nascent asset class that doesn’t produce an income stream, traditional fundamental analysis techniques such as discounting future cash flows are not useful for cryptoassets. While some of the valuation work done from an economic perspective (including MV=PQ formulations) has potential, the truth is that future “speculative” value dwarves any reasonable assumptions about bitcoin’s present value.

Both bitcoin’s usability and investability continue to improve at a steady rate. Despite inventor Satoshi Nakamoto’s original vision of electronic cash, even Coinbase’s CEO Brian Armstrong was recently forced to admit that “it will be quite some time before you cross the street to Starbucks in the U.S. and pay with crypto.” That said, Bitcoin’s Lightning Network, a second-layer solution offering instantaneous transactions is seeing steady adoption, with nearly 2900 nodes and a capacity of over 80 BTC ($500k) as of writing.

According to a recent Bloomberg article, bitcoin transactions have shifted from 90% seedy illegal activity in 2013 to just 10% illegal transactions today, with speculation taking the lion’s share of the pie. The biggest hurdle for large pools of institutional capital to enter the crypto space remains custody and clearing solutions; on that front, this month’s unveiling of Bakkt, a third-party clearing service partnered with the Intercontinental Exchange (ICE), could be a major step in the right direction. For individual investors, SEC approval of a bitcoin ETF remains ever elusive, though decisions on several strong proposals is due at the end of September.

The textbook definition of a bear market is lower lows and lower highs, but a colloquial definition could be a market where prices are failing to rally on “good news.” And despite the ostensibly favorable fundamental developments we noted above, Bitcoin is still struggling to find a sustained bid. Other measures of investor interest in the asset class have also fallen back to the same relatively subdued levels of last year, including google search popularity for bitcoin:

Anecdotally, the crypto market appears to be following the classic bubble “blueprint.” After hitting the delusion/greed/”New Paradigm” stage at the start of the year, it feels as if traders are well into the bear market emotionally by now. Indeed, certain segments of the market may be showing signs of capitulation and despair, and even once we put in a sustainable bottom and return to the long-term trend, it may still be awhile before prices begin to “take off” again: 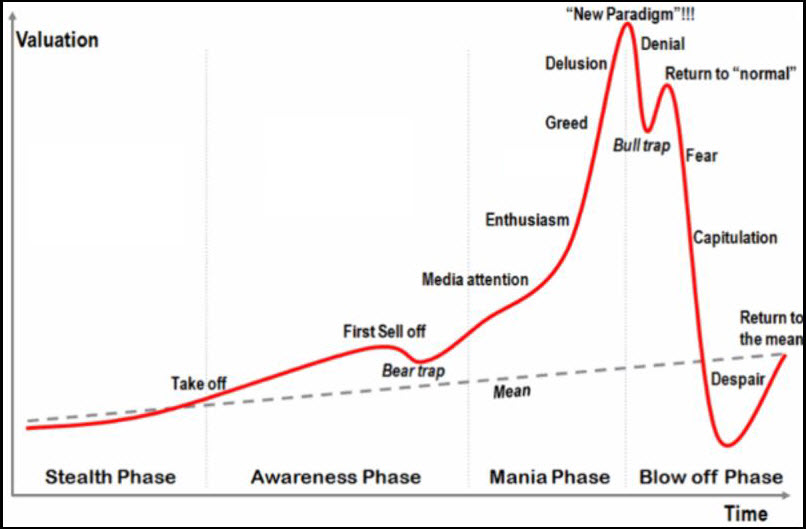 As we hinted above, Bitcoin remains in a downtrend based on the textbook definition (lower lows and lower highs). That said, bulls have stepped in repeatedly to defend $6,000 level, which also marked the final retracement before the big blowoff top at the end of last year. If this key level gives way, bears will likely look to target previous-resistance-turned-support in the $5,000-$5,100 area next. Meanwhile, longer-term bulls will want to see Bitcoin break back above its 200-day moving average and bearish trend line resistance near $8,000 before feeling more comfortable dipping their toes in. Only if we can clear that key barrier can bulls start to think about another surge to rival the one we saw late last year.