In FX markets, the euro jumped in response to comments from Mario Draghi earlier today. The European Central Bank President said that “the threat of deflation is gone and reflationary forces are at play."

While it may be a quiet day for macroeconomic data, it hasn’t been the case for the markets. Stocks fell sharply at the London open, before paring back their losses sharply, while gold has managed to hold onto its gains after its suspicious-looking drop on Monday. In FX markets, the euro jumped in response to comments from Mario Draghi earlier today. The European Central Bank President said that “the threat of deflation is gone and reflationary forces are at play." This was a clear indication that the ECB may be ready to reduce its monetary stimulus programmes earlier than anticipated.

If the single currency now manages to rise further, it will probably perform much better against a weaker rival rather than those where the central bank is already – or about to turn – hawkish. At the moment the Japanese yen does not appear to be particularly strong despite a somewhat risk-off tone in the markets with equities struggling and safe haven gold coming back. This may be due to the fact the Bank of Japan sounded more dovish than anticipated at its last policy meeting a couple of weeks ago. The EUR/JPY may therefore rise in the long term as disparity in monetary policy – or expectations thereof – between the Eurozone and Japan grows.

In fact the EUR/JPY is finally above that 125.80 resistance level it had formed twice in the month of May. If price moves away from this 125.80 level so that this turns into a clean break – as opposed to a false break – then a potential re-test of this level could hold as support going forward. Some of the upside objectives include:

The caveat in the above paragraph was that if the EUR/JPY moves away 125.80 level “so that this turns into a clean break.” Well, if it turns out to be a false break and price goes back into the prior range then this would be deemed a short-term bearish development. In this potential scenario, the EUR/JPY may then fall back to test support levels such as 124.10. 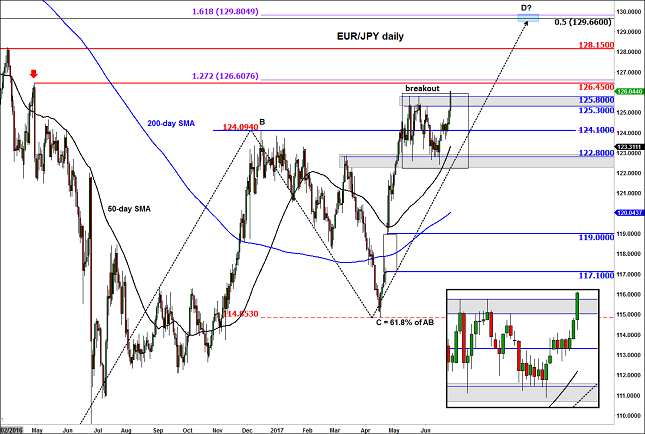