888 Holdings said it has trebled its dividend payout for 2020 after reporting strong growth in revenue and adjusted earnings, adding it expects to see its topline grow further this year.

The online bookmaker and gambling company said revenue soared 52% to $849.7 million in 2020 from just $560.3 million as more people shifted their gambling online during the pandemic. Income from its Casino games jumped 63%, Sport revenue rose 35%, Poker was up 48% and Bingo reported milder growth of 9.9%.

Adjusted Earnings before interest, tax, depreciation and amortisation rose to $155.6 million from $92.1 million, driven by higher revenue and a better margin of 18.3% versus 16.4% the year before.

The company said it is expecting to report another year of revenue growth in 2021 after seeing ‘strong momentum’ in the early stages of the year, but did warn that regulatory and compliance changes are expected to weigh on annual revenues by $70 million to $100 million.

‘We are pleased with our continued progress in the US, and with three new states set to launch in 2021, we are poised to see the scale benefits of our investments here. We enter 2021 with strong momentum, with a record level of customers, and with a positive reaction to our suite of new products and innovations. As a result, as well as the group's strengths as a product-centric, responsible, and diversified operator, the board believes that 888 has an outstanding platform to deliver continued strategic progress during 2021 and beyond,’ said chief executive Itai Pazner.

The 888 share price has jumped 5% in early trade taking it to a fresh all-time high.

The share price trades above its 20& 50 sma and within an ascending channel dating back to mid-March showing an establish bull trend.

The RSI is showing overbought so it could be prudent to wait for some consolidation or a pull back before placing any aggressive bullish bets.

Immediate resistance can be seen at 364 the upper band of the ascending channel. Beyond here bulls could aim for 400 round number.

On the flip side failure to break out of the channel could see the price rebound lower towards 334 the mid-point in the channel before testing horizontal support at 325p. It would take a move below this level to negate the current bullish trend. 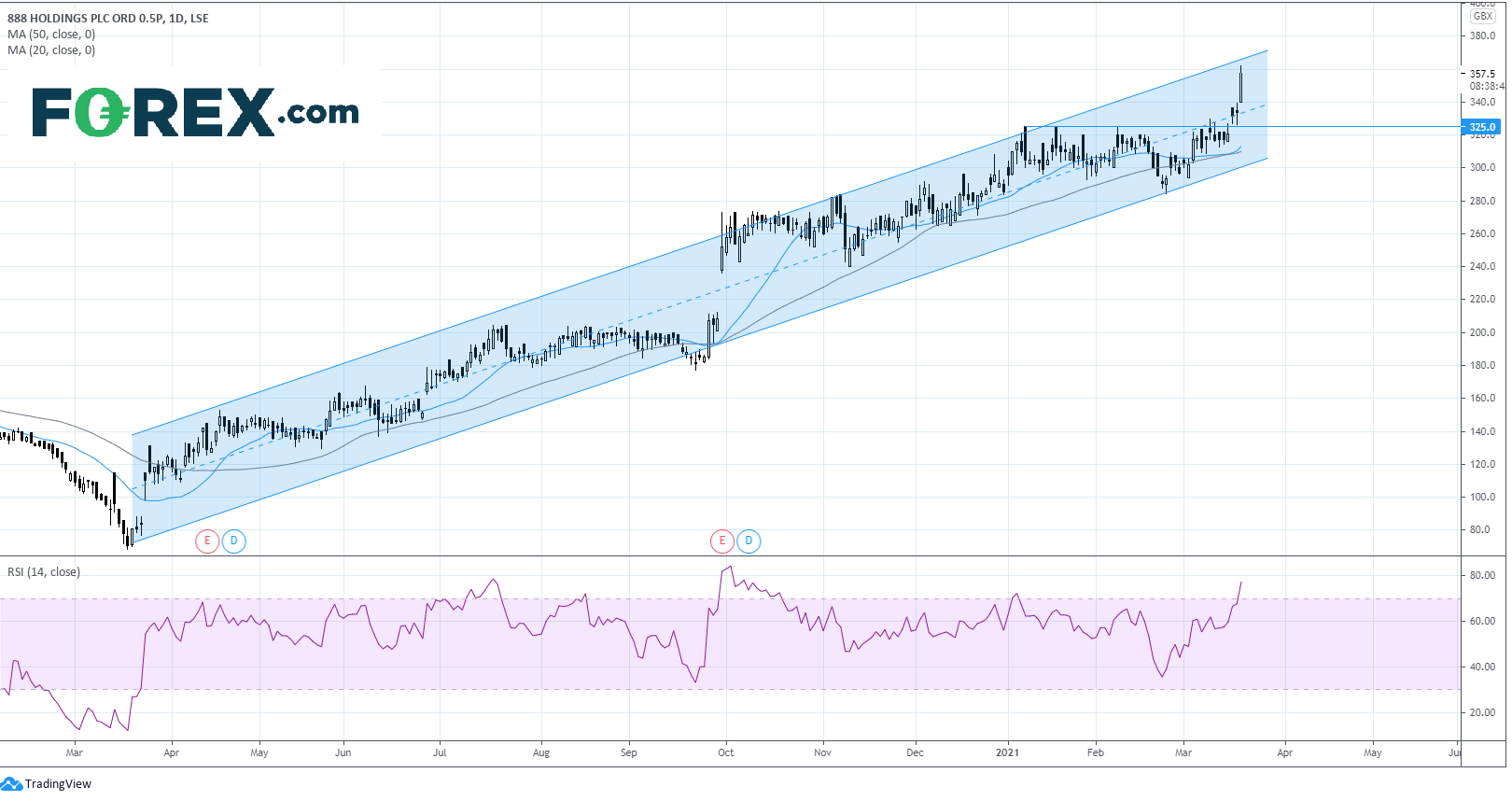 Vodafone has set the price of Vantage Tower’s IPO ahead of the towers business listing in Frankfurt.

A total of 95.8 million shares will be sold at $24 each to raise gross proceeds of up to EUR2.3 billion. That would value Vantage Towers at around EUR12.1 billion. Shares are expected to start trading on the Frankfurt Stock Exchange today.

‘This IPO unlocks value for our shareholders: it demonstrates the value of our towers assets in a 5G world, sets up Vantage Towers to unlock its full potential as a focused independent tower operator, with the proceeds reducing group debt,’ said Vodafone’s chief executive Nick Read.

‘Eighteen months ago we started the carve out of Vantage Towers as part of our strategy to improve returns on our assets. We have moved at pace and today's successful IPO is the culmination of all that hard work,’ he added.

National Grid said it has struck two major deals that pivot the company more towards electricity distribution and away from gas while underpinning its hopes to grow the business over the coming years.

The company has agreed to buy the UK’s largest electricity distribution network from PPL Corp for £7.8 billion. At the same time, National Grid will sell The Narragansett Electric Co to PPL Corp for £2.7 billion.

National Grid intends to sell a majority stake in its gas transmission system, National Grid Gas, ‘later this year’. It said it is expecting ‘strong interest’ and is aiming to have a deal wrapped up by the end of 2022.

National Grid said this would gear its UK portfolio more toward electricity, which will represent 70% of its assets after the deals complete compared to 60% right now. The company said it expects electricity distribution to experience a ‘high level of asset growth as a result of the ongoing energy transition’.

National Grid is aiming to deliver 5% to 7% asset growth to help underpin growth in its dividend each year in line with CPI inflation.

After the deals complete sometime in the next four months, National Grid said around 40% of its assets will be in the US with the other 60% in the UK.

‘In combination with the continued successful execution of our strategy in the US, establishing National Grid as the leading electricity transmission and distribution operator in the UK will strengthen our long-term growth prospects, enhance our role in the UK's energy transition and drive long term shareholder value. Following the completion of these transactions, we will continue to have a diversified portfolio of assets across the UK and US, with a strong asset growth profile that will further underpin our dividend policy for the longer term,’ said chief executive John Pettigrew.

Vectura Group said revenue and profits grew in 2020 and that it intends to dish out £115 million to shareholders in the form of a special dividend after winning its court case against GlaxoSmithKline.

The company, which specialises in inhaled medicines, said revenue increased 6.9% in 2020 to £190.6 million from £178.3 million. Lower income from selling medicines was offset by higher income from providing development services and increased royalties from GSK following the court case.

Vectura turned to a £132.8 million operating profit from a £27 million loss the year before. That was driven by a £121.1 million one-off gain after being awarded damages and interest from the case against GSK over a patent that covers three of GSK’s products.

‘After the positive outcome of the appeal in the GSK US patent litigation, initial proceeds were received by Vectura in January 2021. Following a review of the group's allocation priorities, we have today announced that the board has approved, in principle, a special dividend of approximately £115 million which is intended to be paid to shareholders during 2021,’ said chief executive Will Downie.

Ocado Group said its online grocery business with Marks & Spencer Group has continued to perform well as revenue jumped almost 40% in the first quarter of its financial year.

Each company owns 50% of the grocery joint venture after Ocado abandoned its partnership with Waitrose last year.

M&S products have continued to prove popular with customers by accounting for around 25% of the average basket.

Ocado said the increase in revenue represents strong sales over the holiday period that then started to normalise once lockdown rules were reintroduced in early January.

‘Over the past year, large numbers of UK consumers have made a permanent shift to online grocery shopping. Ocado Retail is best placed to serve these customers as we continue to improve the customer experience through the joint venture with M&S, adding new products, offering greater value, and maintaining high customer service levels,’ said chief executive Melanie Smith.

‘Q2 2021 represents the one year anniversary of the start of the Covid-19 pandemic which accelerated the demand for online grocery; while this year's quarterly sales figures will reflect the year-on-year comparisons with periods of full lockdown, we expect strong growth over the coming years as we continue to lead the charge in changing the UK grocery landscape, for good,’ she added.

Although the venture will come up against tougher comparative periods going forward, Ocado said it is still expecting the grocery business to report year-on-year revenue growth in the second quarter.