Alcoholic drinks giant Diageo said it will return billions to shareholders over the next three years after performing better than expected during the first half of its financial year and seeing evidence that the global economy is recovering quicker than originally anticipated.

Diageo said it was returning £4.5 billion in July 2019 through either buybacks or special payouts but this was put on hold as the pandemic disrupted the business. The programme will now be restarted and has been extended by two years to the end of June 2024. Notably, £1.25 billion was returned to shareholders before it was put on pause.

The second phase of the programme will see the next £1 billion returned by the end of the next financial year.

The decision comes as Diageo said it now expects to report organic operating profit growth of at least 14% in the current financial year, outpacing the expected growth in organic net sales.

‘I am very pleased with how our business is recovering in fiscal 21, our strong competitive performance across key markets and our robust cash generation. Our disciplined approach to capital allocation is unchanged. Our priority remains to invest in the business to deliver sustainable and efficient organic growth and to pursue acquisitions that further strengthen our exposure to attractive categories,’ said chief executive Ivan Menezes.

Diageo said it had seen a return to organic net sales growth across all regions during the first half. The performance in North America, its largest market, ‘remained particularly strong’ while Europe improved thanks to the off-trade channel and the reopening of hotels and restaurants. In Africa, Asia and Latin America, Diageo has seen signs of a recovery but said travel remains limited.

Diageo trades above its ascending trendline dating back to mid March. It also trades above its 20 & 50 sma on the daily chart indicating an established bullish trend. Momentum had picked up over the past month after the share price broke out of a period of consolidation across the start of the year.

The RSI is pointing higher and is above 50 indicating that there could be more upside to come.

The bulls will be looking to break above resistance at 3319p the 19 month high reached in April in order to attack 3370p the high October 2020. Beyond there 3500p could come into play.

A move below 3170p yesterday’s low could negate the near term up trend. Should the bulls fail to come in here 3080p could offer strong support as a level which capped gains on several occasions across the year so far. 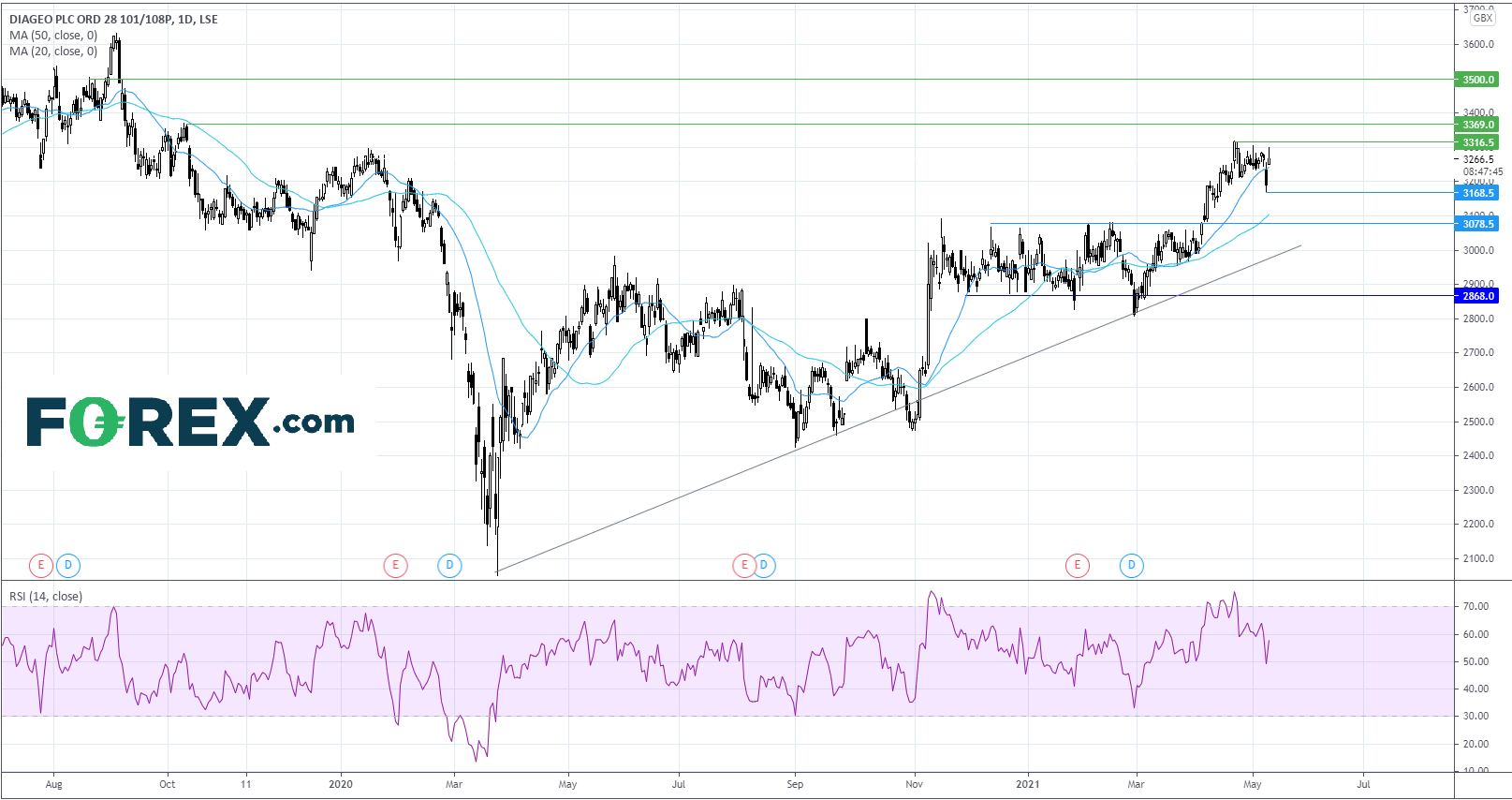 UDG Healthcare said it has received a takeover offer from Nenelite Ltd that has been unanimously backed by its board of directors as it reported strong profit growth during the first half of its financial year.

The company, which provides advisory, communications, clinical and packaging services to the healthcare industry, said the offer is for 1,023 pence in cash per share. That represents more than a 30% premium to the volume weighted average price over the last six months. It also sits 6.7% higher than UDG shares have ever traded.

The offer values UDG at £2.61 billion and gives it an enterprise value of £2.77 billion. Nenelite is an affiliate of private equity manager Clayton, Dubilier & Rice.

‘UDG has transformed since disposing of its supply chain business in 2015, through a combination of sustained long term organic growth and strategic bolt on acquisitions, adding additional capabilities and expanding the UDG Group's geographic footprint into a leading healthcare services provider,’ said chairman Shane Cooke.

‘While the UDG board remains confident in the long term fundamentals of the group, we believe that this is an attractive offer for UDG shareholders, which secures the delivery of future value for shareholders in cash today. The offer reflects the quality, strength and long term performance of UDG's businesses and its future growth potential. We believe that our people, our clients and our businesses will continue to prosper under the stewardship of CD&R,’ said Cooke.

The news came as UDG reported results for the six months to the end of March, revealing that its adjusted operating profit jumped 10% despite net revenue coming in flat year-on-year. Profit was partly boosted by new acquisitions as well as solid performances from Ashfield and Sharp.

‘We continue to expand the range of services we offer clients across many therapeutic areas including several COVID-19 related projects. Additionally, we continued to execute strategic acquisitions, committing $80 million to date in FY21, expanding our capabilities in market access and patient support programmes, and further growing our presence across the UK, EU and US,’ said chief executive Brendan McAtamney.

UDG said it is now aiming to deliver adjusted operating profit growth of between 12% to 14% over the full year, up from its previous range of 11% to 13%, after taking the anticipated contribution from the $36 million acquisition of Nuvera which was also announced today. Nuvera is a US healthcare consultancy firm that specialises in patient support.

UDG Healthcare shares were trading 22% higher in early trade at 1029.5, representing a new all-time high for the stock.

Flutter could delay FanDuel IPO after its CEO resigns

Flutter Entertainment has warned the potential listing of its US unit FanDuel could be delayed after its chief executive announced he will be leaving the business.

However, King has now handed in his resignation. He will stay in his role while FanDuel searches for his successor.

‘It has been a privilege to lead FanDuel over the last 4 years through what has been an incredibly exciting period for the company. With FanDuel well positioned for the next chapter of its growth and always an entrepreneur at heart, now is the time for me to take on new opportunities as the next step in my career,’ King said.

‘As previously announced, the Flutter board has been assessing the potential merits of listing a small stake in FanDuel in the US.  Whilst Matt's departure will affect the timing of any potential US listing, the board will continue to keep this option under review,’ Flutter said.

Coca-Cola HBC, the bottling and packaging partner of the Coca-Cola Co, said volumes and prices both improved during the first quarter of 2021 as people keep consuming their favourite drinks at home.

Coca-Cola HBC said its sparkling and energy drinks were the main drivers of growth during the period. Emerging markets delivered accelerated growth in revenue, up 2.7% at constant currency, while established and developing markets continued to negatively impacted by the pandemic and reported a 3.2% and 3.5% decline, respectively.

‘We have had a good start to the year despite the continued impact of the pandemic, with revenue growth led by Sparkling, Energy and strong execution in the at-home channel. Our operational agility, flexible route to market and strong customer relationships mean that we are well placed to capitalise on the reopening of the out-of-home channel. In the meantime, our diverse and balanced geographic footprint has allowed us to benefit from accelerating revenue in the Emerging market segment, while lockdowns continue to impact most European markets,’ said chief executive Zoran Bogdanovic.

‘The speed and shape of recovery from the pandemic remains uncertain, but Q1 puts us on track to achieve our 2021 guidance for a strong recovery in FX-neutral revenues, along with a small increase in EBIT margin,’ he added.

Compass Group beat expectations in the first half of its financial year despite reporting considerably lower revenue and profit due to the pandemic weighing on demand, but said it expects things to improve further in the third quarter.

The company, which provides food and support services to business, hospitals and schools, said revenue in the six months to the end of March was down over 30% to £8.6 billion from £12.2 billion the year before. Underlying operating profit was down more than 64% to £290 million from £817 million.

That was better that the £8.5 billion in revenue and £276 million in profit expected by analysts.

Pretax profit at the bottom-line plunged to £133 million from £787 million.

Compass Group said it made progress with restoring margins despite considerably lower volumes. It has continued to retain existing customers with a retention rate of 95.6% while new business wins rose by 20%.

Compass Group is expecting revenue to improve in the third quarter, and it is aiming to deliver an operating margin of 4.5% to 5%. The margin came in at just 3.4% in the first half, down from 6.7% the year before.

‘With the gathering pace of vaccination rollouts across our major markets, we are working closely with our clients to prepare to reopen their sites safely, although the picture across the world remains mixed . Whilst we expect any revenue recovery to be gradual, we remain confident in our ability to return to a group underlying margin above 7% before we return to pre COVID volumes,’ said chief executive Dominic Blakemore.

‘We are now a stronger, more agile business with new client propositions, improved digital capability and a more flexible cost structure. These factors, underpinned by a robust balance sheet, have created a strong platform from which the business will continue to recover and grow. In the longer term, we remain excited about the significant structural growth opportunities globally, the potential for further revenue and profit growth and shareholder returns over time,’ he added.