Flutter considers its options for US unit FanDuel, Deliveroo plans to raise £1 billion through its IPO, DCC buys Worner Medizinprodukte, Ascential struggles during a tough 2020, and Provident shares sink as the FCA investigates its consumer credit business.

Flutter Entertainment shares hit a new all-time high on Monday after revealing it is considering a spinning-off its US business FanDuel with an initial public offering in the US.

Reports broke last week that said Flutter, the owner of Paddy Power Betfair and other gambling brands, was being pushed by some investors to spin-off FanDuel to try and boost its value.

‘Flutter notes the recent press speculation in relation to a potential IPO of FanDuel, the group's US business. Flutter regularly evaluates its organisational and capital structure to assess how best to position itself to deliver upon the group's strategy,’ said the company.

‘Options including the listing in the US of a small shareholding in FanDuel are being considered but no decision has been made at this time. Should a decision be made to proceed with a listing in due course, an announcement will be made as appropriate,’ Flutter added.

CNBC reported some investors are frustrated that Flutter trades at a discount to US outfit DraftKings despite the fact FanDuel is the largest player in the country.

Flutter owns 95% of FanDuel but its partner Fox Sports has an option to raise its stake in FanDuel from 2.5% to 20%. Some reports suggest the complicated ownership structure could prove a barrier to any IPO.

Where next for Flutter Entertainment shares?

Flutter has surged over 200% across the pandemic. The share price has been trading in an ascending channel since early June. It also trades above its upward sloping 20 & 50 sma on the daily chart, showing established bull trend.

Today’s 6% jump higher in early trade has seen Flutter’s share price break out above the upper band of the ascending channel, hitting a fresh all time high at 17030. This now acts as the immediate resistance level ahead of 18000 round number the next target.

It is worth noting that the RSI sits firmly in overbought territory so some consolidation at this level or a pullback could be on the cards before any move higher. Support can be seen at 16315 the previous all time high 8 Jan ahead of 16000 the upper band of the channel and 15150 resistance from earlier this month. It would take a breakthrough this level to negate the current bullish trend. 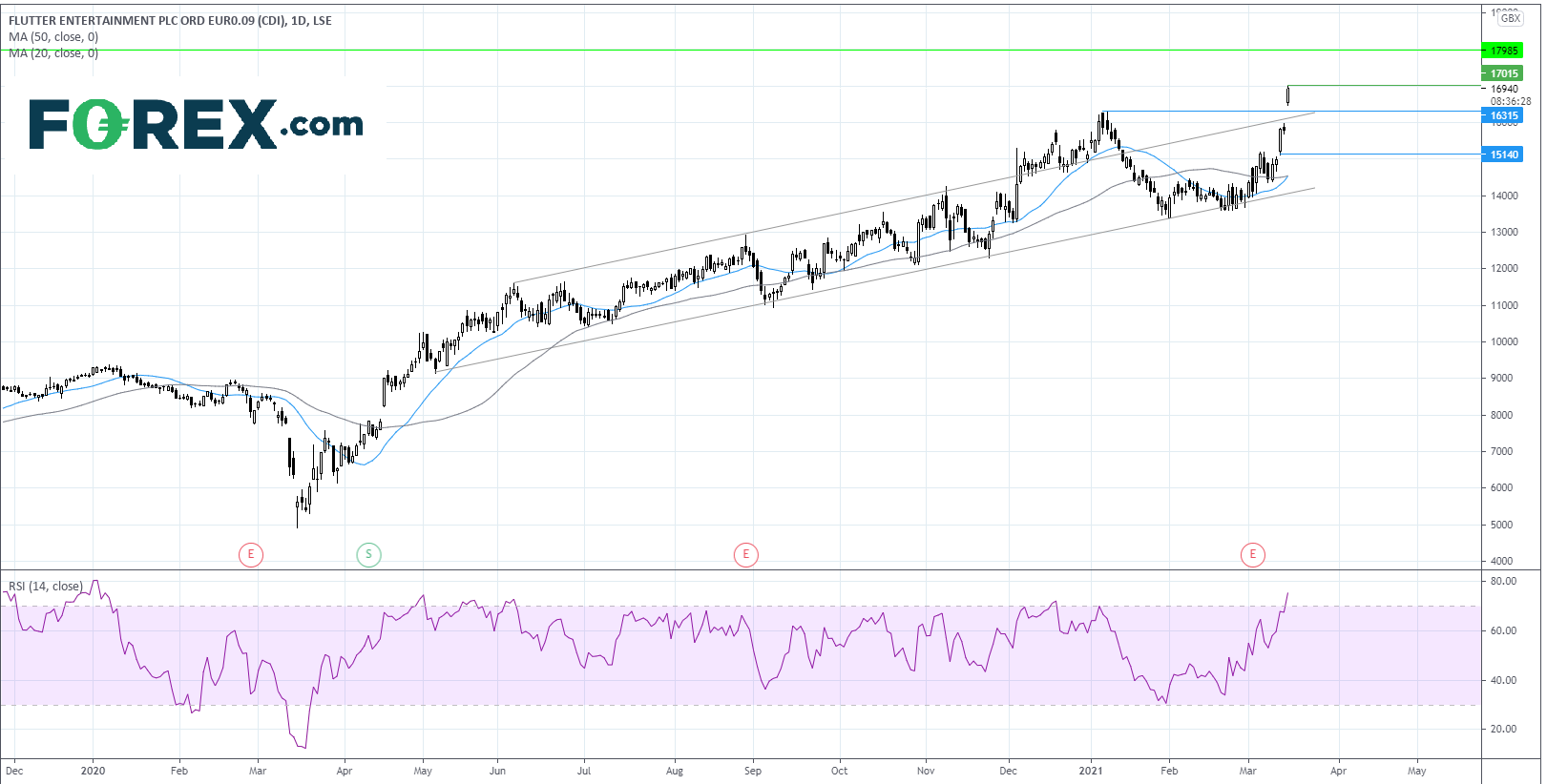 Provident Financial being investigated by FCA over consumer credit

Provident Financial shares sank on Monday as the company revealed it was being investigated by the Financial Conduct Authority over its consumer credit business.

The news came as Provident said it will beat expectations in 2020. The company, which owns a number of brands that help lend money to people underserved by mainstream lenders such as banks, said it performed better than expected during the final quarter of 2020, putting it on course to report ‘slightly better’ results for the full year than expected.

Vanquis Bank and Moneybarn both remained profitable during the year and remain in a good position to grow over the medium-term. However, the environment for its consumer credit division has deteriorated significantly over the last year.

The consumer credit division has seen lending fall during the pandemic, but collection rates have remained strong, with 90% of maturities due in the final quarter of 2020 collected. Provident launched an operational review into the consumer credit division last year. However, the business has seen a growing number of complaints from customers, prompting it to take further action.

‘Therefore, we have concluded that a Scheme of Arrangement is necessary in order to address the issue of rising customer complaints as we work to position [the] consumer credit division for the future. We will update the market on our progress with the Scheme in due course,’ said Provident.

This will mean Provident opening itself up to potential redress claims. The company said it will ‘ensure that customers with a legitimate claim get fair access to redress payments’ and that it will put aside £50 million to help settle them. It will book a further £15 million in costs related to the scheme.

The Financial Conduct Authority has now launched an investigation into how the division conducted business between February 2020 and February 2021, and will specifically focus on ‘consideration of affordability and sustainability of lending to customers’.

Deliveroo has confirmed its plans to launch an initial public offering in London and said it is hoping to raise up to £1 billion.

The company said it will be listing on the main market of the London Stock Exchange and that the new shares will be offered to institutional investors outside of the US. It will also launch a ‘community offer’ that will allow customers to apply for shares in the company.

The price of the IPO will be determined through a book-building process.

Notably, Deliveroo’s founder and chief executive Will Shu will retain a significant amount of control even after the IPO. Shu is the only person who owns Class B shares, which each carry the right to 20 votes, whereas all other investors will have Class A shares that carry one vote each. Shu’s Class B shares will not be listed and this structure will last for three years, Deliveroo said, after which they will be converted into Class A shares.

You can find out everything you need to know about Deliveroo and its IPO here.

Ascential sinks into the red during tough 2020

Ascential said 2020 was a tough year as the pandemic weighed on its physical events business, but said it adapted well as the market experienced an accelerated shift to toward digital commerce.

Adjusted Earnings before interest, tax, depreciation and amortisation plunged 74% to £28.5 million from £109 million. That was the result of lower revenue and a much tighter margin of just 10.8% versus 28.7% the year before.

Its Marketing division was hit by the closure of live events during the pandemic, but its subscription-based business performed well. Retail & Financial Services also suffered because of a lack of events.

Product Design reported slightly higher revenue in the year, mainly thanks to a stronger subscription model. However, the best performing area of the business was Digital Commerce, with revenue up by almost one-third and adjusted Ebitda soaring by over 85% in 2020.

‘The last year has underlined the importance of our strategic focus: serving brands that operate in digital marketplaces.  We were already operating in a highly digital world, and the fundamental shift towards online channels has only accelerated since the pandemic,’ said chief executive Duncan Painter.

‘Digital Commerce is now our largest and fastest growing segment and is well placed to benefit from the structural gains arising from the acceleration in eCommerce adoption.  While our two marquee events are ready for a recovery as conditions allow, the Covid-19 pandemic restrictions continue to influence the timing of a return to maximum participation at venues,’ Painter said.

‘The pace and effective delivery of vaccines will also be a critical factor.  Nevertheless, the resilience and underlying momentum within the business model, combined with our strong balance sheet and strong trading in the first two months of the year, give us confidence of further good progress in the year ahead,’ he added.

DCC has agreed to purchase medical and laboratory products maker Worner Medizinprodukte for an initial enterprise value of EUR80 million.

The FTSE 100-listed sales, marketing and support services group said it hopes to complete the deal sometime in April but it must secure regulatory approval in Germany and Austria, and that the existing Worner management team would remain in charge of the business after the deal.

Worner was founded in 1991 and supplies products to the primary care sector in Germany and Switzerland. It sells its products to around 20,000 customers, including general practitioners, specialist medical centres, and labs.

The company reported EUR70 million in revenue in 2020. Worner will be part of the DCC Vital group of companies that focuses on selling and distributing medical products.

‘There are strong similarities between DCC Vital's primary care activities and Worner, particularly in terms of customer focus, product offering and digital sales approach, providing value creation opportunities in areas such as procurement, marketing and the use of technology,’ said DCC.

‘The acquisition of Worner will also provide a platform for the expansion of DCC Vital's broader activities into Continental Europe, particularly in Germany, which is a large, well-funded and growing healthcare market,’ it added.

Notably, Worner has a target list of bolt-on acquisitions it wants to make and DCC said it will look to support its efforts to bulk-up once the deal is completed.