IHG hopes to be on the road to recovery, IAG calls for governments to do more to let international travel resume, St Modwen shares jump following a takeover offer, AstraZeneca sees positive results from its lung cancer trial, and three companies prepare to IPO in London.

InterContinental Hotels Group said it saw a significant improvement in demand in March and April, led by improvements in the Americas and China, and said it expects momentum to build this year as the world comes out of the pandemic and ease restrictions.

The company said revenue per available room was down 34% in the first quarter from the year before and less than half what was delivered before the pandemic hit, but said it still outperformed its rivals in its key markets. IHG said occupancy continued to improve during the quarter but still only sat at 40%.

Virtually all of IHG’s sites are open, with just 4% of its estate currently shut.

In China, occupancy of 40% was far worse than the 57% seen in the previous quarter but revenue per available room improved and was more than 78% higher than the year before.

In Europe, the Middle East and Africa, occupancy came in at just 27% compared to 29% in the previous quarter and revenue per available room was 62% lower year-on-year and over 71% lower than before the pandemic hit.

‘Trading continued to improve during the first quarter of 2021, with IHG maintaining its outperformance of the industry in key markets and seeing strong performance in openings and signings as we expand our brands around the world. There was a notable pick-up in demand in March, particularly in the US and China, which continued into April. While the risk of volatility remains for the balance of the year, there is clear evidence from forward bookings data of further improvement as we look to the months ahead,’ said chief executive Keith Barr.

Industries that rely on travel, whether that be airlines or hotels, have been among the hardest hit by the pandemic but the outlook has improved significantly in recent months. For example, the EU has signalled it could start welcoming vaccinated visitors again as soon as next month while the UK is set to publish its finalised list of green travel countries later this month.

‘As the rollout of vaccines becomes more established, travel restrictions lift, and economic activity rebuilds, traveller demand will continue to grow and generate further momentum in an industry recovery over the course of the year. Coupled with our resilience as a business and the important work we're doing to support our owners, develop our brands and expand our pipeline, we're confident that IHG is well positioned for sustained growth,’ he added.

IHG is trading above its ascending trendline dating back to early April last year. The rally has run out of steam in recent weeks, struggling to push past 5340p resistance. The price trades below its 20 & 50 EMA on the daily chart. The RSI has turned lower indicative of further downside.

Immediate support is being tested at 5020 the ascending trendline. A break below here could see the sellers gain traction towards 4780p April’s low. 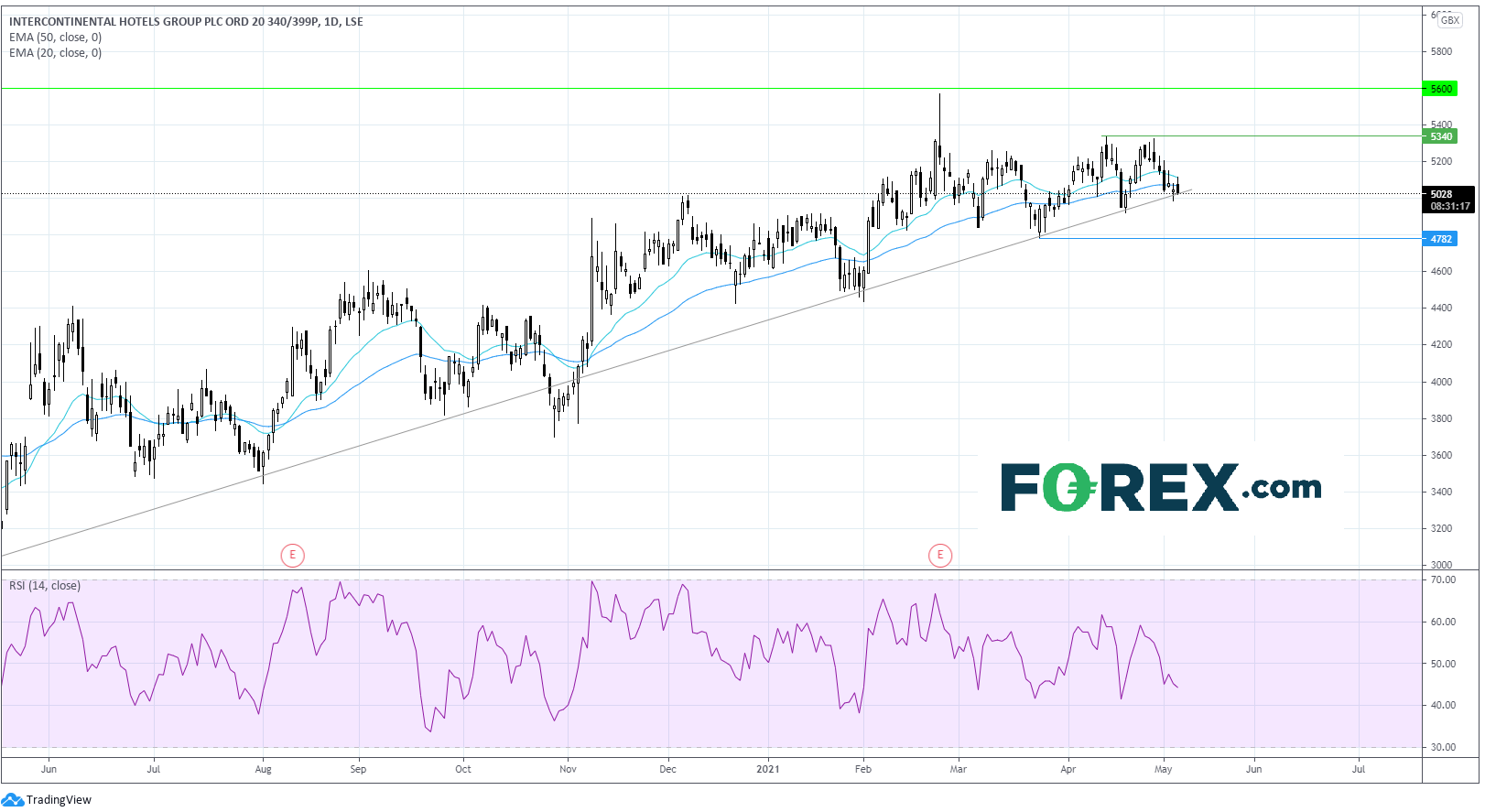 International Consolidated Airlines has urged governments to open travel corridors and get international travel back up and running to aid the global economic recovery as passenger numbers remain severely depressed due to restrictions.

IAG, which owns airlines including British Airways, Iberia and Vueling, said it was running at less than one-fifth of the capacity in the first quarter of 2021 compared to a year earlier and that it only expects this to improve to 25% in the second quarter, adding it is cautious about that forecast due to the ongoing uncertainty.

The one bright spot in the period was a rise in cargo-only flights to 1,306 in the three-month period compared to only 969 in the fourth quarter of 2020.

Unsurprisingly, revenue was down almost 79% to EUR986 million from EUR4.58 billion the year before, with its adjusted operating loss ballooning to EUR1.13 billion from EUR535 million. The loss was slightly larger than the EUR1.12 billion loss forecast by analysts.

IAG said it is ‘ready to fly’ but stressed that it needs governments to take action. It is pushing for countries like the UK and the US, both of which are enjoying more successful vaccination campaigns than most countries, to open travel corridors for those who have had their jabs.

It also wants a cheaper and simpler quarantine system for arrivals, an improvement in contactless technology at the border and the introduction of digital passes to show if someone has been tested or vaccinated.

‘These measures will enable a safe re-opening of our skies. Travel underpins a global industry that supports 13 million jobs in Europe alone. There's a high level of pent-up demand and aviation will play a critical role in reconnecting people and getting economies back up and running again,’ IAG said.

IAG is not providing guidance due to the uncertain outlook, but said it ended the quarter with EUR10.5 billion of liquidity and had cut weekly operating costs to EUR175 million.

St Modwen Properties said investment funds managed by the Blackstone Group have made a non-binding takeover offer for the company that it plans to recommend if it is finalised.

The property developer said Blackstone has made a ‘series of unsolicited proposals’ and that its latest offer is for 542 pence per share, more than a 21% premium to St Modwen’s closing share price yesterday. It is also almost 24% higher than its last reported net tangible assets per share figure of 438p.

‘Having considered the possible offer, the board of St Modwen has indicated to Blackstone that the possible offer is at a value the board would be willing to recommend unanimously, should a firm intention to make an offer pursuant to Rule 2.7 of the Code be announced on such terms,’ St Modwen confirmed.

St Modwen intends to release another statement when appropriate.

The company has performed well during the pandemic thanks to its focus on investing in logistics and housebuilding, both of which have held up well and benefit from long-term structural growth.

‘We were particularly pleased by the safety profile. We've seen encouraging uptake of novel combinations in this setting and believe this new approach will add a further option for patients with high unmet medical need. We look forward to discussing next steps with regulatory authorities,’ said Dave Fredrickson, vice president of AstraZeneca’s oncology business.

However, trials that just used imfinzi and chemotherapy as a treatment did not deliver a statistically significant improvement in survival.

AstraZeneca shares were trading 0.7% higher this morning at 7719.5.

There was plenty of news from companies planning to list on the London Stock Exchange over the coming weeks.

Taylor Maritime, which owns and operates ships used for dry bulk shipping, said it is issuing 250 million shares at $1 each to fund its proposed purchase of 23 ships. All the proceeds will be used to buy the ships and shares will be issued in the company to settle the difference. Notably, 17 of the 23 ships are already being managed by Taylor Maritime. The company said shares will start trading on the premium segment of the main market of the LSE on May 27. It said it should start life as a publicly-listed company with a net asset value of at least $0.98.

Meanwhile, Liontrust ESG also announced it plans to list on the premium segment of the main market by raising £150 million. The company plans to invest the funds in a number of ‘sustainable companies’ and plans to have 25 to 35 investments on its books at any one time. The initial fundraise is expected to close in late June with admission to occur soon after.

Lastly, Belluscura has outlined plans to list on AIM through a £15 million listing priced at 42 pence to 48 pence per share. The company has developed portable oxygen enrichment technology and its first product is a lightweight oxygen concentrator that has been cleared by the US Food & Drug Administration and used instead of much heavier tanks and devices. The listing is expected to complete before the end of May.