Babcock shares dive as the virus weighs on its performance, AVEVA remains confident with its outlook, Indivior shares jump as it says it will beat expectations, and Meggitt says its recovery will take time.

Top News: Babcock says COVID-19 situation has ‘worsened in most of our markets’

Defence and civil aviation firm Babcock International warned coronavirus continues to weigh on its financial performance and that its balance sheet could weaken as a result.

The company said underlying revenue in the nine months to the end of December was resilient, falling just 3% to £3.39 billion, but underlying operating profit plunged 34% to £202 million.

‘Uncertainty remains around the outturn for this financial year, especially given that our fourth quarter is historically our strongest and that the COVID-19 situation has worsened in most of our markets. Given this uncertainty, and the start of our review of contract profitability and balance sheet, we continue not to provide financial guidance for this financial year,’ Babcock said.

Babcock ended 2020 with net debt of £1.2 billion after repaying £255 million over the last year. It is currently reviewing its balance sheet and profitability and said initial news was not good. The review is being conducted alongside accounting firm PWC.

‘Early indications suggest that there may be negative impacts on the balance sheet and/or income statement for current and/or future years,’ Babcock said.

That is running in tandem with a strategic review that was launched in November that aims to boost cash delivery, grow the company’s relationships with the UK government and accelerate international growth. An update on the review is expected in May when it releases its annual results for the year to the end of March 2021.

‘While trading in the third quarter has continued to reflect the challenges of the first half and there remain a number of near term uncertainties, the fundamental strengths of the group and the opportunities ahead give us confidence for future years and I look forward to reporting back at the full year results,’ said CEO David Lockwood.

The share price has been trending lower since December, trading below its 20 & 50 sma indicating a bearish trend.

The RSI has dropped firmly into oversold territory falling below 30 so some easing up in the selloff could be expected before any further selling.

Support can be seen at today’s low and the all-time low of 207. A move above 260p could see more bulls jump in. 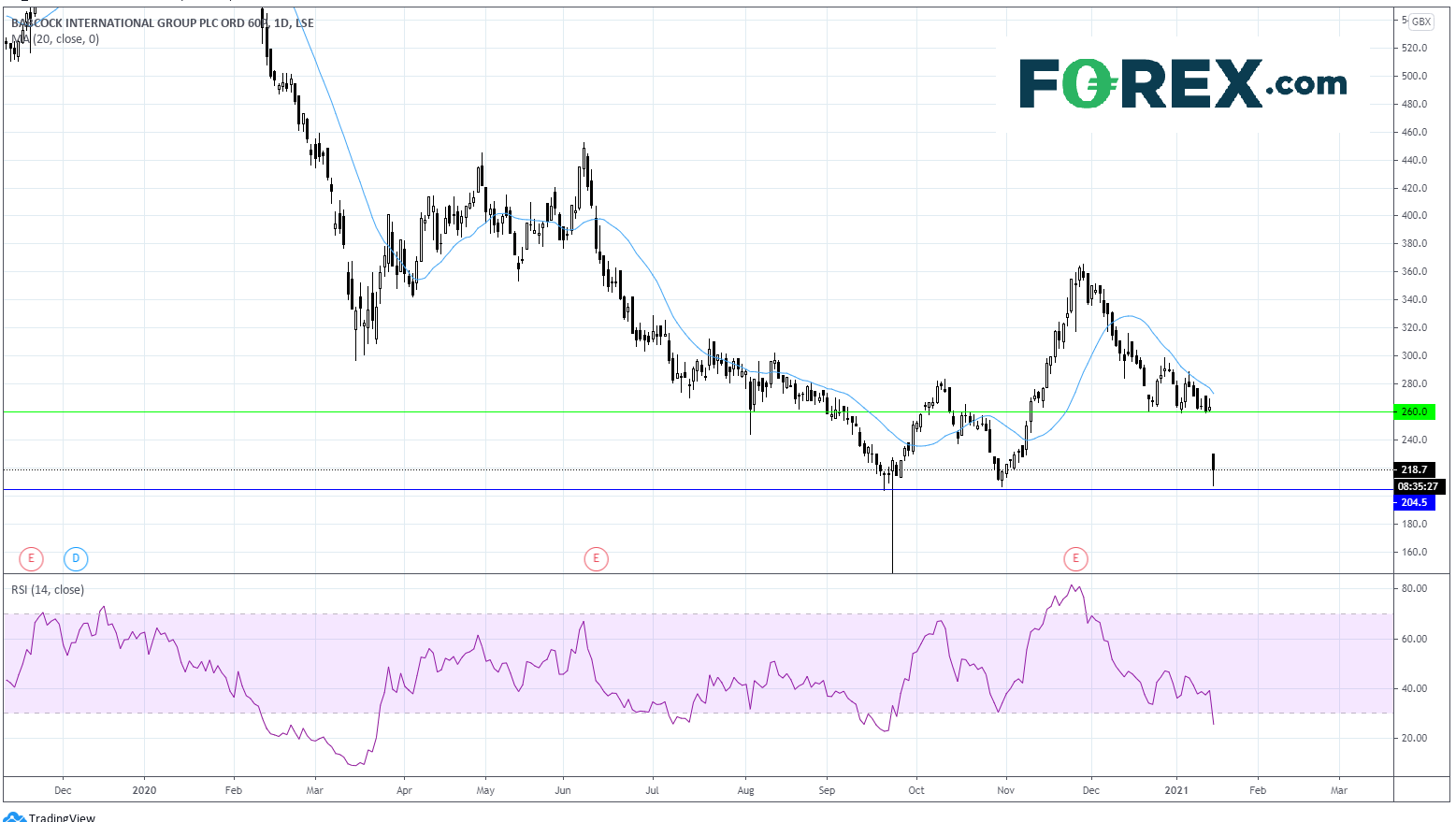 Industrial software outfit AVEVA said it remains confident in its outlook for the full year after posting a 1.5% rise in revenue during the nine months to the end of December.

The company said contract renewals were strong in the last three months of the year and that recurring revenue rose 10%. The jump means recurring revenue now accounts for 68% of AVEVA’s total income. Organic constant currency revenue grew 26% in the three-month period after a large number of customers renewed their subscriptions. It also got a boost as a three-year contract due to be signed in early 2021 was secured early. The order pipeline for the last three months of the year is ‘solid’.

‘The board remains confident in the full year outlook for AVEVA. Notwithstanding the disruption seen to the trading environment in 2020, the trend towards the digitalisation of the industrial world is strong and the board remains excited about the significant growth opportunities ahead,’ said AVEVA.

AVEVA will hold its World Digital customer event between January 26 to 28 and it said it will be its  ‘largest digital event to date’.

SEGRO collects most rent for 2020

SEGRO said it has collected 98% of all the rent due from its tenants in 2020 and said collection rates had remained strong in the early part of the new year.

The company, which rents out warehouses and industrial sites, said it had received 88% of the £63 million rent due in respect of the first quarter of 2021, which is higher than the previous three quarters. It said it expects ‘the substantial balance’ of outstanding rent to be paid by the end of the quarter.

SEGRO shares were broadly flat in early trade at 966.2.

The UK’s Serious Fraud Office has dropped an investigation looking into whether there was corruption within British American Tobacco.

AstraZeneca said the EU has approved proposals for an additional dosing option to be used for Imfinzi.

The company said a 1500mg fixed dose every four weeks was now allowed in locally advanced, unresectable non-small cell lung cancer in adults that had not responded to other treatments. It said lung cancer is the leading cause of cancer and that 80% to 85% of cancer patients have this particular type of disease.

‘We are pleased to offer a four-week dosing option to lung cancer patients in Europe to meet an urgent need and help enable continuity of care during the pandemic. Cancer won't wait, and it is our job to provide patients with treatment options that address the challenges the pandemic poses to their care,’ said Dave Fredrickson, executive vice president of the company’s oncology business.

Indivior said revenue and profits will be ahead of expectations in 2020.

The company – a world leader in the treatment of opioid addiction – said annual net revenue is expected to be in the range of $645 million to $650 million, considerably higher than its previous guidance range of $595 million to $620 million. Still, that would be down from $785 million in 2019.

It also said operating costs will be ‘slightly below’ guidance of $470 million to $480 million.

Meggitt said it expects to report a steep drop in revenue and profits as the pandemic weighs on the civil aerospace market, warning that the recovery will take time.

It said trading in the final three months of the year was below expectations, as hopes that the aerospace market would recover at a better rate didn’t come to fruition.

‘The recent launch and roll-out of vaccines, coupled with pent-up demand for air travel, provides a supportive backdrop for the recovery in civil aerospace in 2021.  However, given the logistical challenges associated with a global vaccine roll-out, we expect this positive development will take time to feed through into growth in flight and passenger numbers and aftermarket activity levels,’ Meggitt said.

‘As a result of the work we have done in 2020 to reposition the group and our diverse end market exposure across civil aerospace, defence and energy, we remain well placed for the recovery,’ it added.

Hammerson’s chief financial officer James Lenton has handed in his resignation, prompting a search for his replacement. Lenton will remain in his role while a successor is found.

‘Following successful completion of the rights issue, VIA Outlets disposal and induction of the new chair of the board and CEO, I feel now is the right time to look for a new opportunity. I remain fully committed in the role until my successor is in place,’ Lenton said.

‘Ashmore continued to deliver strong relative investment performance over the quarter and current equity and fixed income valuations in emerging markets suggest there is much further to go in terms of recovery investment returns. The strong outperformance delivered over the past three quarters provides a firm basis for Ashmore's investment processes to deliver further absolute and relative performance for clients,’ said CEO Mark Coombs.

‘While COVID will continue to affect individual countries differently, the deployment of vaccines supports the view that 2021 will see improved growth and importantly the growth in emerging countries is forecast to be higher than in the developed world. This therefore provides an opportunity for investors to increase exposure to higher return emerging markets asset classes and to benefit from economic and market recoveries as they continue to develop in 2021."