Royal Mail plans to reward shareholders as business improves during the pandemic, Pennon promises to return cash if it can’t find the right M&A opportunity, Imperial Brands expects revenue and profits to grow, and Oxford Nanopore outlines plans for an IPO.

Royal Mail said it still expects adjusted operating profit to more than double in the current financial year as it reaps the benefits of more parcels being sent during the pandemic, giving it the confidence to make a one-off dividend payment to shareholders.

Royal Mail is still expecting to report adjusted operating profit of around £700 million in the current financial year. That was raised earlier this month from a previous target of just £500 million and will be a significant improvement from the £325 million delivered in the last financial year.

The better-than-expected performance this year has given Royal Mail the confidence to make a one-off payment of 10.0p per share to investors, which will be paid on September 6 to those on the register at July 30. A new dividend policy will be introduced when its next set of annual results are released in May.

That reaffirmation of its guidance comes as Royal Mail prepares to provide a business update on GLS later this afternoon. GLS chief executive Martin Seidenberg and its chief financial officer Thorsten Pruin will outline medium-term targets for GLS at 1430 GMT.

This will see GLS target revenue growth of around 12% CAGR between the 2019/20 to 2024/25 financial years. It is aiming to double operating profit to over EUR500 million and to generate free cashflow of over EUR1 billion. Capital expenditure will remain low in the meantime, swallowing up just 3% to 4% of revenue.

GLS is expected to report an adjusted operating profit of around £350 million and a margin of 8.7% in the current financial year. That compares to just £208 million profit delivered in the 52 weeks to the end of March 2020.

Additional growth will be achieved by ramping up the focus on business-to-consumer transactions, with more people shopping online and having parcels sent to their home. Royal Mail also believes there are opportunities for GLS to expand overseas.

Royal Mail will release its annual results on May 20.

Royal Mail has been on a tear since early November. It trades above its 20 & 50 sma on the daily chart and above its 4-month ascending trend line ion a bullish trend.

The RSI is in supportive of further gains whilst it remains out of overbought territory at 30.

Immediate resistance at 530 needs to be broken in order for the buyers to target 570 a high from February and March 2018.

Failure to break this resistance again could see the pair reverse back towards support at the 50 sma and ascending trendline. A break below here could see the sellers look to test 460 the 50 sma ahead of 440 horizontal support which capped losses several time in February. A move below 440 could see the bears gain momentum. 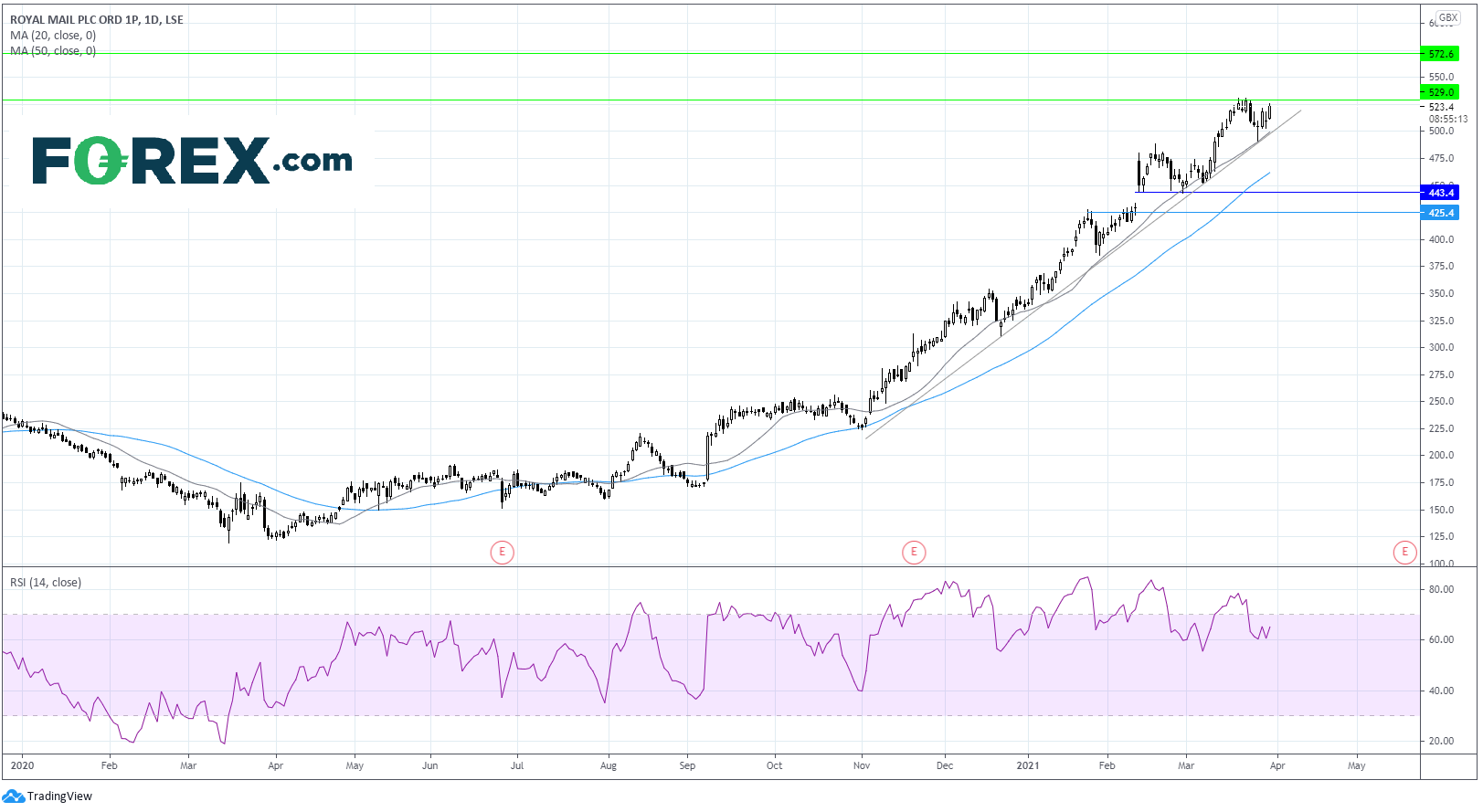 Pennon Group said it is narrowing down its options on how to best spend the billions it raised from selling Viridor, adding it will make a ‘substantial return of capital’ to shareholders if it can’t find the right opportunity.

The water company offloaded waste and recycling business Viridor for £3.7 billion to KKR in March 2020 and has used the proceeds to deleverage the business by around £1 billion and top up its pension contributions. Pennon is still considering what to do with the rest and is hoping to make a ‘major investment’ into the water sector, but has said it will return the cash if nothing comes to fruition.

‘Pennon believes there is significant value potential from the reinvestment of the Viridor sale proceeds in the UK water sector and continues to narrow down its review of potential growth opportunities. In the event a major value accretive investment opportunity is not available, Pennon expects to make a substantial return of capital to shareholders,’ the company said.

Pennon intends to provide a firm decision on what it is doing with the cash by the time it releases its annual results on June 3.

Meanwhile, the company said South West Water remains on track to outperform and double base returns on regulated equity while Pennon Water Services has continued to win new contracts.

Oxford Nanopore Technologies has announced plans to go public with an initial public offering (IPO) in London later this year.

Oxford Nanopore was founded in 2005 when it was spun-out of the University of Oxford. The company has developed a new generation of DNA/RNA sequencing technology. This sequencing is used for scientific research and by a wide range of other sectors like food and healthcare.

It has over 1,350 patents and applications in progress and started to sell its first commercial device, the MinION portable DNA/RNA sequencer, back in 2015. It has since introduced new smaller and larger formats of the sequencer.

The company said it intends to complete an IPO in London this year but warned this would depend on market conditions.

‘We believe that an IPO is the start of the next phase of our journey. Gaining access to deeper, international pools of capital would support our ambitious growth plans, enhancing our ability to innovate and scale our manufacturing and commercial functions. It would, we believe, provide us with the resources and flexibility to fulfil our long-term potential,’ said the company.

Imperial Brands said it expects revenue and profits to grow in line with expectations in the current financial year.

The tobacco giant released an update ahead of the release of its interim results to the end of March 2021 on May 18.

The company said it still expects to report net revenue growth of ‘at least’ 1% on an organic, constant-currency basis in the first half of its financial year. Adjusted organic operating profit growth is expected to be in the mid-single digits at constant currency.

Imperial Brands said revenue had benefited from strong tobacco pricing but that profits had been hurt by lower duty windfalls in Australia and the unwinding of stockpiling by wholesalers in the US before the pandemic. For its next-generation products, which homes the likes of its vape pens, revenue should benefit from a weaker comparative period and the unit will report ‘reduced losses’.

‘Full year adjusted group operating profit will reflect increased investment consistent with our strategic plans and is expected to be in line with our guidance for low-mid single digit organic growth at constant currency,’ said Imperial Brands.

Imperial Brands said it expects foreign exchange to have a broadly neutral effect on earnings in the first half of the year before causing a 2% headwind in the second.

Carnival said P&O Cruises Australia has yet again postponed the relaunch of its cruise ships until the end of July 2021, dashing hopes of a getaway for some of its customers.

Carnival has pushed back the relaunch of its cruise ships around the world as it continues to monitor the ever-changing situation in each country it operates in. The latest delay will impact customers that had booked inclusive breaks with P&O Cruises Australia between June 18 and July 30.

P&O Cruises has also taken the decision to cancel cruises to Papua New Guinea and the Solomon Islands for the rest of 2021 due to the uncertainty of travelling between different borders. It said this will also impact the Cairns season, where the Pacific Explorer ship was due to be based for two months.

‘We are sorry that some of our guests will be unavoidably inconvenienced by these changes to the existing schedule at a time when we remain optimistic about returning to service as society keeps opening up,’ said president of P&O Cruises Australia Sture Myrmell.

‘We are continuing our discussions with governments and health authorities to develop a framework for the staged resumption of cruising,’ he added.