The inflation print beat expectations of 20.4% YoY, possibly because of the 200bps rate cut on October 21st!

At the Central Bank of Turkey’s last meeting, members decided to cut the interest from by 200bps, from 18% to 16%.  Expectations were for a cut of only 50bps.  They did this even though inflation rose to 19.58%, its highest level since March 2019.  Why did they do this?  As my colleague Matt Weller pointed out, Turkey’s President Erdogan dismissed several of the central bank’s governors, including the only one who opposed a cut at the previous meeting.  He replaced them with 3 handpicked successors and predictably, they cut rates.  However, they cut my much more than expected.

Today, Turkey released inflation data for October.  The headline number was 19.89% YoY, slightly higher than September’s print of 19.58% YoY.  This is the highest reading since January 2019.  However, the inflation print beat expectations of 20.4% YoY, possibly because of the 200bps rate cut on October 21st!  The Central Bank of Turkey meets again on November 18th.  Based on the rate cut at the previous meeting, one could assume the 3 replaced governors will do as Erdogan wishes. Will the inflation beat give Erdogan a feeling confidence to cut interest rates again at the next meeting (although, of course, it’s not his decision)?

The weaker inflation data pushed USD/TRY to near all-time highs set on October 25th, at 9.8496. On that day, price action formed a shooting star candlestick which indicated the pair was ready for a possible pullback, especially with the RSI in overbought territory and diverging from price!  However, the pair thus far has beaten the analytics and traded as high as 9.7823 today. 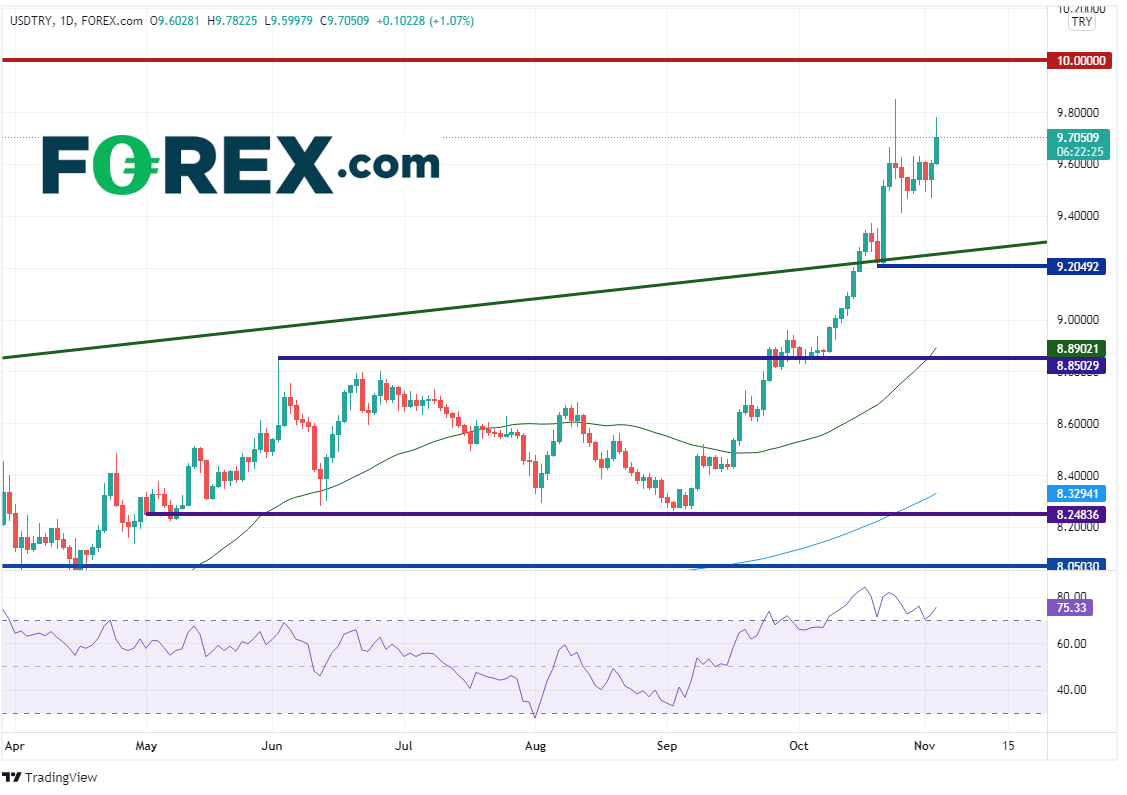 With Erdogan (unofficially) at the helm of the Central Bank of Turkey, today’s inflation data may give him reassurance that he is doing the right thing by having the central bank governors lower interest rates.  However, if expectations are for more rate cuts, watch for USD/TRY push for stops above 10.000!