UK banks have been tugged to and fro by the latest comments from the Bank of England lately...

As we noted in our US bank earnings preview report, banks are the primary repository for excess cash and the go-to place for new loans, making them a bellwether for the health of the broad economy. Following a generally upbeat earnings season from US banks, traders will cast their eyes across the Atlantic to see if UK banks can keep the momentum going over the next two weeks.

In terms of the key sector-wide theme to watch, UK banks have been tugged to and fro by the latest comments from the Bank of England. Alarmingly, the central bank warned commercial banks to prepare for negative interest rates in the coming months, though it emphasized that policymakers hope not to resort to such dramatic measures. Further cuts to interest rates would directly reduce banks’ lending revenue.

In a seeming contradiction, the BOE also issued an optimistic 5% GDP growth forecast for the year, which implies that there may be no need for negative interest rates after all. From our perspective, the strong growth scenario may be more likely, with the UK among the world leaders in vaccine distribution and the uncertainty (though not necessarily all the disruption) of Brexit behind it.

Looking at the chart, BARC has been consolidating in the middle of a sideways range since mid-November (note this will be a common trend for all the UK banks). With no clear momentum (RSI near 50) and prices near the middle of their established range, readers may prefer to wait for a post-earnings breakout below 130 or above 160 to signal the more likely next move in the stock: 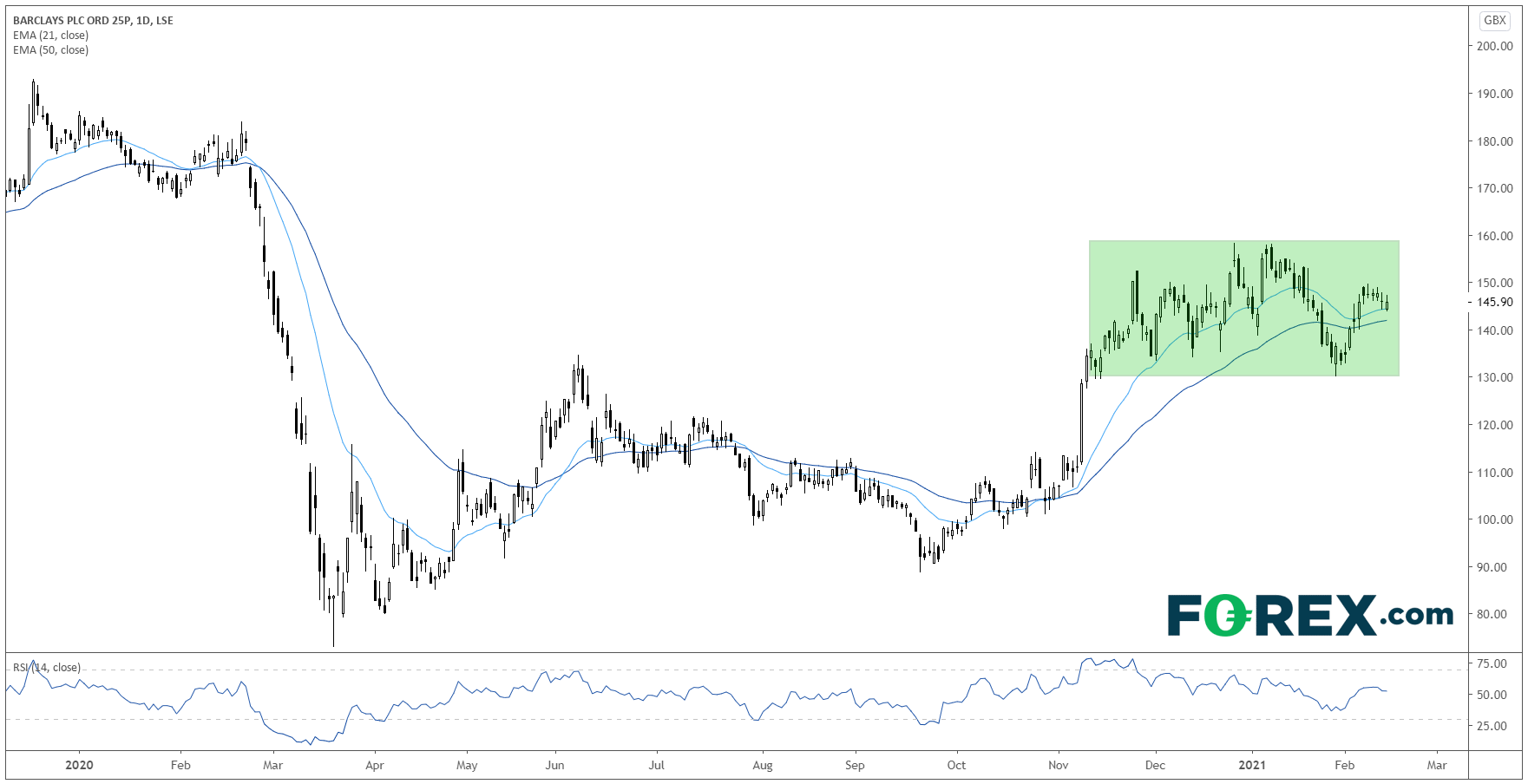 From a technical perspective, the rebranded RBS saw the biggest decline of the four major UK banks on the back of the COVID pandemic, though its also seen the most impressive, rallying roughly 90% off its September lows. Looking ahead, the stock is testing the top of its consolidation range, presenting a clear risk management level for bulls to consider buying breakouts above or bears to “hide” stops above if earnings come out softer than expected:

In direct contrast to NatWest, HSBC saw its stock hold up better than each of its major rivals in 2020, losing “just” roughly 50% off its highs to the September trough, though its recovery has also been the most tepid at just over 40%. In other words, HSBC has generally been less volatile and more steady over the last year+. Now, prices are consolidating in a symmetrical triangle pattern, signaling the potential for a bigger move if earnings lead to a breakout in either direction: 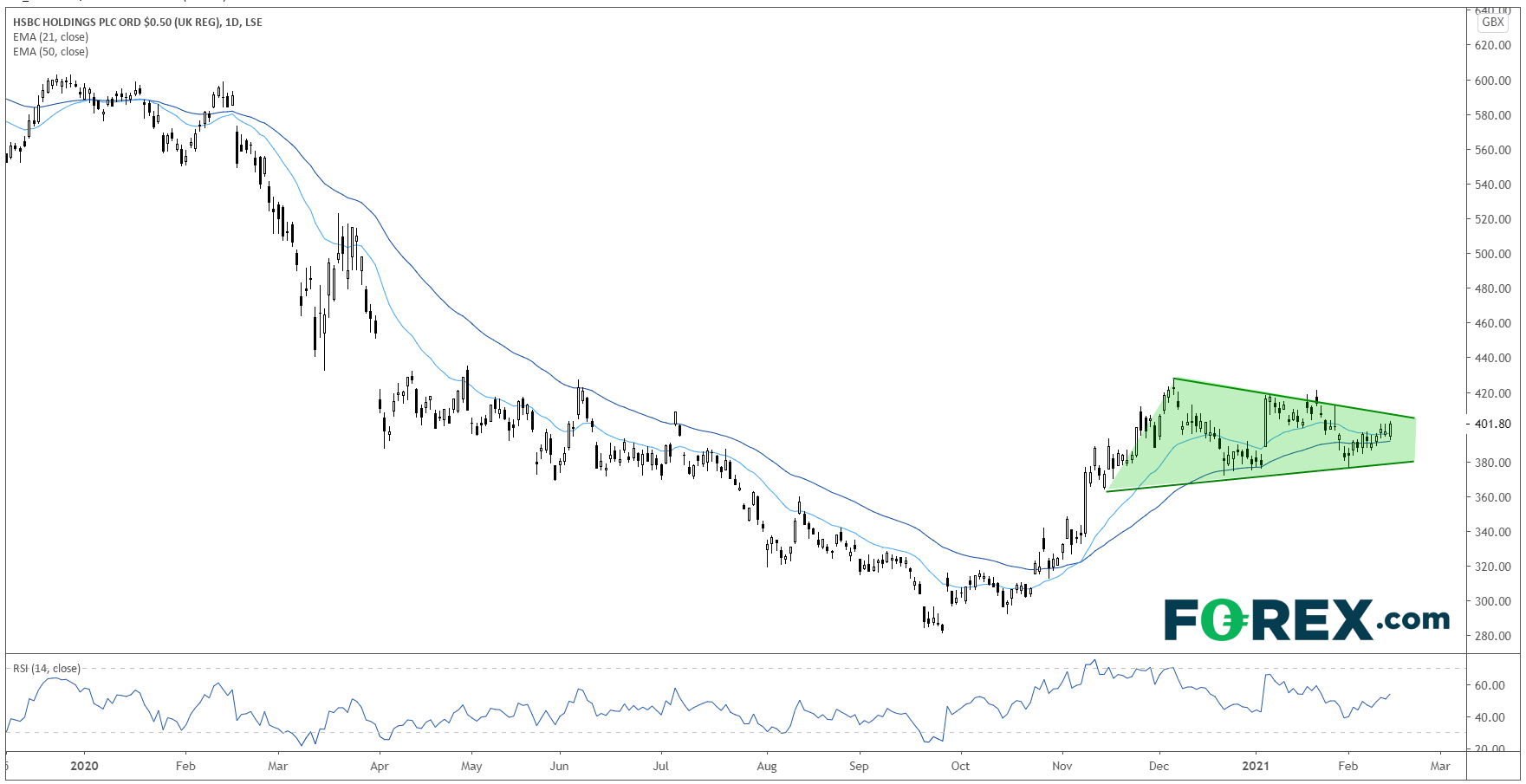 Last but not least, Lloyds has been hit hard by Brexit, the pandemic, and the so-far tepid recovery. The stock is currently trading at about half of its 2019 high, meaning that it may be the UK bank with the most potential to rally if the UK economy is able to get into gear later this year. The chart itself isn’t too compelling at the moment, with prices consolidating in the middle of the well-established 32-40 range. Bulls will be watching closely to see if this laggard can break above 40 as an early sign that it may play “catch up” in the coming weeks: 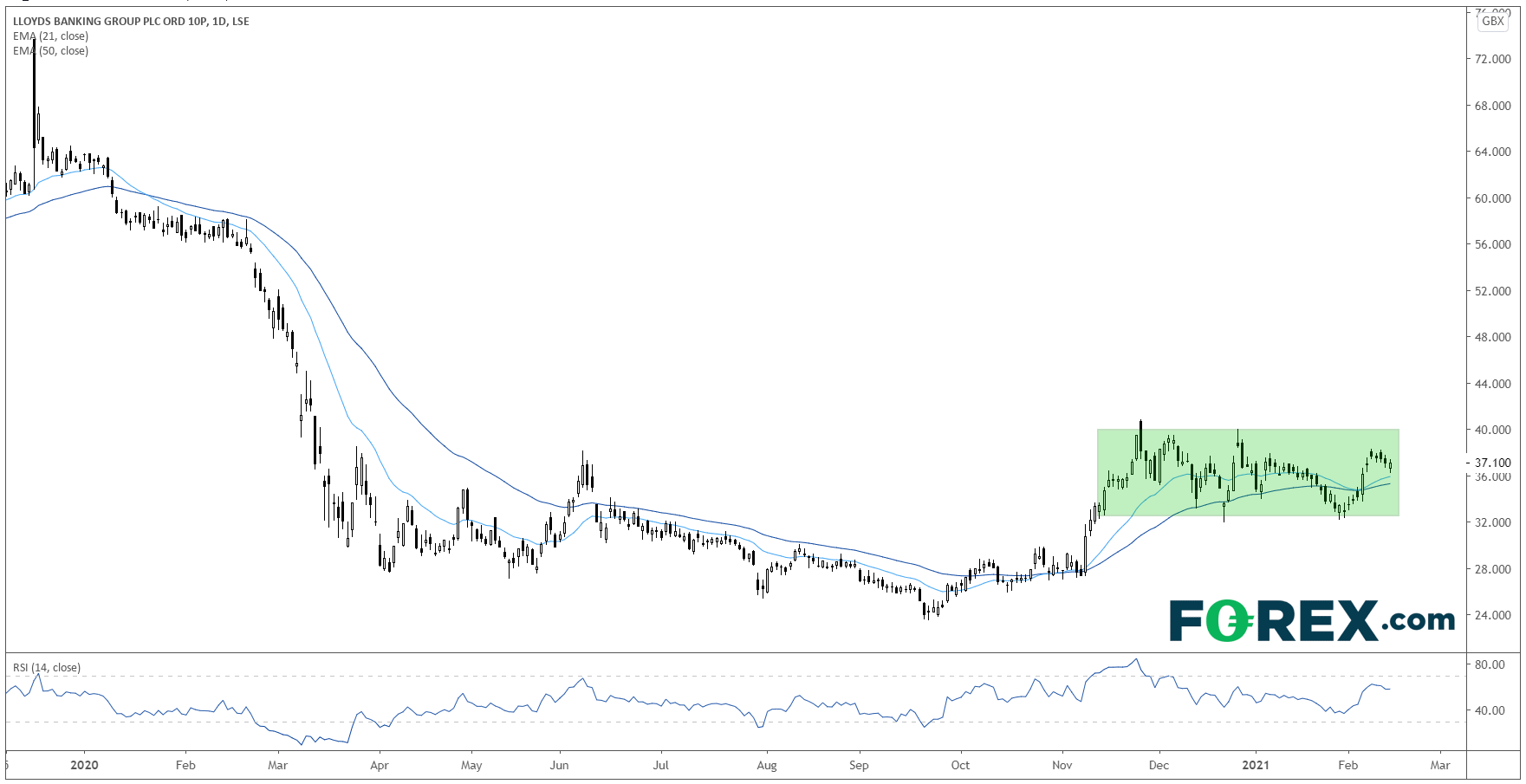