See the key themes and trends we'll be watching next week as major US banks report Q2 earnings.

Q2 earnings season picks up speed next week when the major US banks start to report. Against the backdrop of improving global growth, fiscal stimulus, vaccines allowing reopening, and low-interest rates, US banks are expected to deliver investors record earnings in 2021.

Q2 has marked the eye of the US re-opening. GDP data to be released in a few weeks’ time is expected to confirm the US economy grew at ~9% in Q2. Households are in good shape and are thought to have accumulated about $2.4T in forced savings that represent ~11% of GDP.

According to data from Factset, “the Q2 bottom-up EPS estimate (which is an aggregation of the median Q2 EPS estimates for all the companies in the index) increased by 7.3% (to $45.03 from $41.97) during this period”.

Now a note of caution. It is important to remember that Q2 is expected to be the peak of the recovery. Lower interest rates, reduced volatility as well as uncertainty around the Federal Reserve’s tapering of asset purchases and the re-emergence of inflation may be reflected in comments by company executives when outlining prospects for the second half of 2021.

After making large provisions in anticipation of losses on loan books following the onset of the pandemic, it turns out that US banks did very well as loan losses failed to materialise. This allowed banks to reverse many of those provisions and re-realize profits on previous loans in Q1.

Last month the Federal Reserve released the results of its annual stress test that confirmed US banks could easily withstand a severe recession and that all 23 institutions examined remained “well above” minimum required capital levels during a hypothetical economic downturn.

After banning buybacks and capping dividend pay-outs last year, the Fed has since cleared all 23 financial institutions examined in their recent stress test to increased pay-outs.

Under the Fed's new “stress test capital buffer” framework, banks have regained flexibility in how they want to pay dividends and buybacks. This is expected to lead to higher dividends and larger buybacks going forward.

JPMorgan is the largest US bank by market capitalisation with over $3.2 trillion in assets. The bank is expected to continue with its $30 billion share repurchase plan in December 2020, valid for an indefinite timeframe.

Revenue is expected to fall from $33.13B in Q1 to $29.87B in Q2, partly due to decreased volatility noted recently by JPM CEO Jamie Dimon who projected a 38% year-over-year plunge in trading revenues.

On the other hand, JPMorgan’s IB revenues are anticipated to be up in Q2, backed by an active M&A market and strong client activity in equities and debt capital markets.

Wells Fargo is the third-largest US bank by market capitalization with over $1.77T in assets. It is the largest mortgage banker in the United States.

Revenues are expected to fall slightly from $18.06B in Q1 to $17.78B in Q2 as the decline in interest rates during Q2 weighs on net interest income on its loan book.

The share price of Wells Fargo has rallied ~ 43% from the beginning of 2021, increasing from $30 to approximately $43.49 at the time of writing, reflecting significant outperformance over the S&P500 which has rallied about 15.5% over the same period. 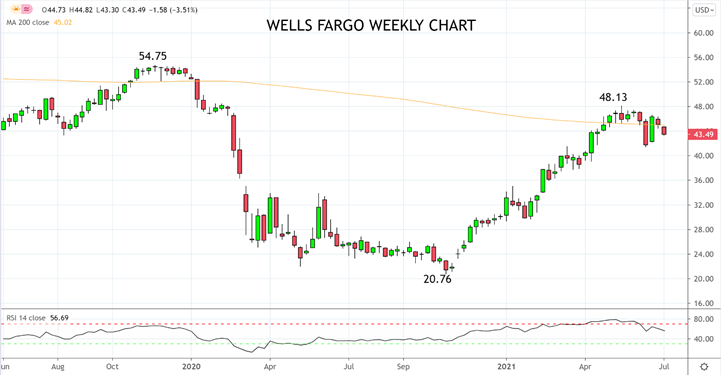 Citigroup is the fourth-largest US bank by market capitalization with over $1.68T in assets.

Revenues are expected to fall slightly from $19.3B in Q1 to $17.58B in Q2, as trading revenues fall by a percentage in the “low 30s”. Strength in equity trading unable to counter weakness in fixed income trading.

Also weighing on revenue, a decision to close the retail banking operations in 13 countries across Asia and parts of Europe to focus more on wealth management, not to mention lower US interest rates in Q2 that reduces net interest income on the loan book.

After falling from a high of $80.29 in early June, the share price of Citigroup is trading near $67.93 at the time of writing. This is still 10% above where it started the year but reflects underperformance vs the S&P500 which has rallied about 15.5% over the same period.

Bank of America is the second-largest US bank by market capitalization with over $2.32T in assets.

Revenues are expected to fall slightly from $22.93B in Q1 to $22.08B in Q2 reflecting softer net interest income that contributes more than 50% of total revenue. Lower interest rates and volatility during Q2are also likely to impact the bank's earnings from the investment banking and sales & trading divisions.

After falling from a high of $43.49 in early June, the share price of Bank of America is trading near $39.75. This is over 30% above where it started the year and reflects significant outperformance vs the S&P500 which has rallied about 15.5% over the same period.