With the Fed dropping its hawkish bias, and with recent US data deteriorating slightly, bond prices should remain supported and yields undermined going forward

Earlier today, we noted that sentiment so far this year has been dominated by US-China trade talks and dovish central banks. Obviously there has been a lot more to it than just that: ongoing Brexit uncertainty, the US Government shutdown and slowdown in global data immediately comes to mind. But regardless of the source of concern, it more or less boils down to what it all means to interest rates. Indeed, it is changes in interest rate expectations that move the markets over the medium term. Slowdown in data would require expansionary monetary policy response, while a US-China trade resolution, for example, would offset some of that requirement from central banks. Perhaps that’s why we haven’t seen any meaningful moves in US bond yields over the past several weeks, as negative global data has been offset by positive news headlines regarding US-China trade dispute. Still, with the Fed dropping its hawkish bias, and with recent US data deteriorating slightly, bond prices should remain supported and yields undermined going forward. It is worth mentioning that there are a number of Federal Reserve officials speaking later this week and if there is a growing consensus that interest rates should remain low for longer, then that could be the trigger behind another potential drop in yields. That, in turn, could weigh on the US dollar and supported buck-denominated precious metals even further.

In fact, the breakdown in yields could resume again soon anyway. As can be seen from the long-term weekly chart, below, the 10-year US bond yields have held below the broken trend line and resistance around 2.80% for a number of weeks now without a meaningful rebound. Thus, the pressure is growing on yields to potentially break further lower as investors continue to price out the odds of interest rate increases.  So, a potential breakdown towards the next support around 2.50% could be on the cards for the 10-year US debt yield. If that level also breaks, then yields could drop to the subsequent support levels around 2.20% and possibly 1.88% next. 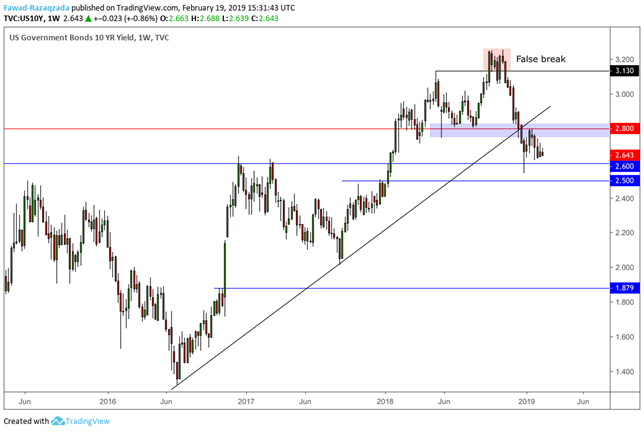