US-China trade concerns resurface ahead of US CPI

There’s no doubt that risk has been off the menu during the Asian hours and this first half of European session today, due, in part, to renewed concerns over a US-China trade deal. However, it wasn’t a full-blown sell-off with major central banks having turned dovish again and the markets are now expecting a couple of rate cuts from the Fed this year, while China has already been at it with various fiscal stimulus measures of its own.

There’s no doubt that risk has been off the menu during the Asian hours and this first half of European session today, due, in part, to renewed concerns over a US-China trade deal. Global stock indices and US index futures have been on a retreat, boosting the appetite for haven assets such as gold and yen. However, it wasn’t a full-blown sell-off with major central banks having turned dovish again and the markets are now expecting a couple of rate cuts from the Fed this year, while China has already been at it with various fiscal stimulus measures of its own. Investors will be keeping a close eye on the upcoming publication of US consumer inflation data in the afternoon. This has the potential to cause bonds, dollar, metals and stocks to move sharply as it could impact interest rate expectations in one or the other direction.

Sentiment has turned slightly negative again with investors re-assessing the likelihood that the US and China will be able to strike a trade deal in the coming months, while the violent protests in Hong Kong over a proposed extradition bill saw outsized moves in local markets. Trade concerns resurfaced after Donald Trump said he is personally holding up a trade deal with China, adding that he won’t sign the agreement unless Beijing reconsiders the terms negotiated earlier in the year. The US President said: “It’s me right now that’s holding up the deal... we’re going to either do a great deal with China or we’re not going to do a deal at all.” He added that the US “had a deal with China and unless they go back to that deal I have no interest.” This comes a day after Trump threatened to raise tariffs on China if his counterpart Xi Jinping refuses to meet with him at the G20 summit in Japan later in the month. That could lead to the imposition of 25% tariffs or “much higher” on $300 billion of Chinese goods.

But the immediate focus will now turn to the US with the publication of Consumer Price Index later this afternoon. According to Donald Trump, the US has a “VERY LOW INFLATION,” which is a “beautiful thing!” If he’s right, today’s CPI could prompt renewed dollar selling. Well, analysts expect CPI to have eased to 1.9% year-over-year in May from 2.0% the month before, while core CPI is seen remaining unchanged at 2.1% in May.

Weak inflation figures are seen as being positive for stocks because it will mean low interest rates for longer. But given renewed concerns over trade, it will probably take more than just weak inflation figures to keep stocks at these elevated levels, especially as the S&P’s rally looks to have come to at least a temporary halt: The index created another inverted doji candle on its daily chart yesterday, pointing to exhaustion in the rally that took place from when index reclaimed the 200-day average earlier this month. Still, the bears will need to see further bearish price action before stepping in. As a minimum, the S&P will need to break key support around 2878 and hold below it to trigger fresh technical selling. Otherwise, we could see a march towards new record highs in the not-too-distant future. 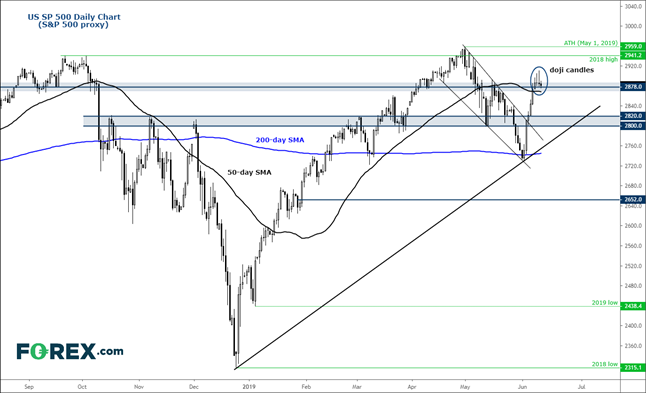