What happens when you combine a stronger dollar with weaker Gold? Weaker commodity currencies

The FOMC statement was mundane to say the least.   However,  Fed Chairman Powell provided some fireworks in the press conference that followed.  As it became more and more clear during the press conference that the only thing the Fed was concerned about was inflation spiraling out of control, the US Dollar (DXY) went bid.  And after the GDP data release today, it US Dollar hasn’t looked back. 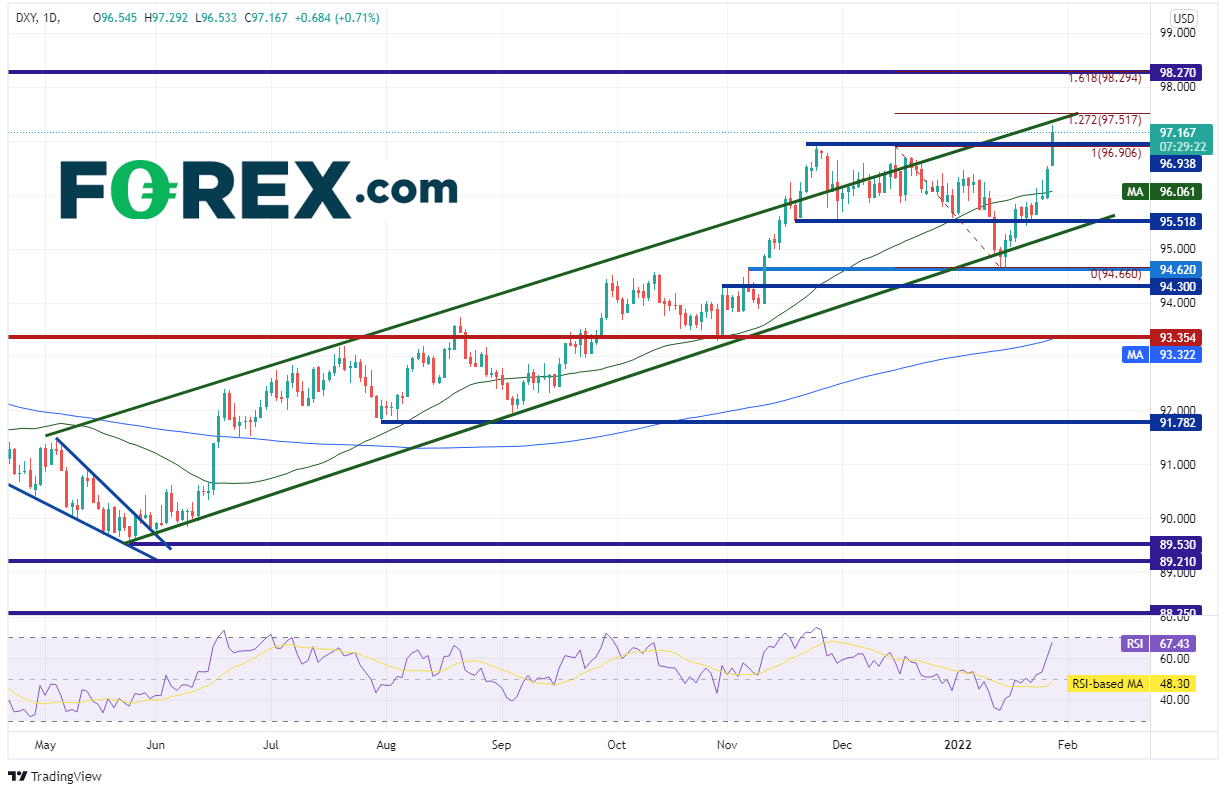 As a result of the strong US Dollar, Gold (XAU/USD) has been moving lower from recent highs on January 24th at 1853.88 down to current levels near the bottom, upward sloping trendline at 1785.  There is also horizontal support at 1782.50. 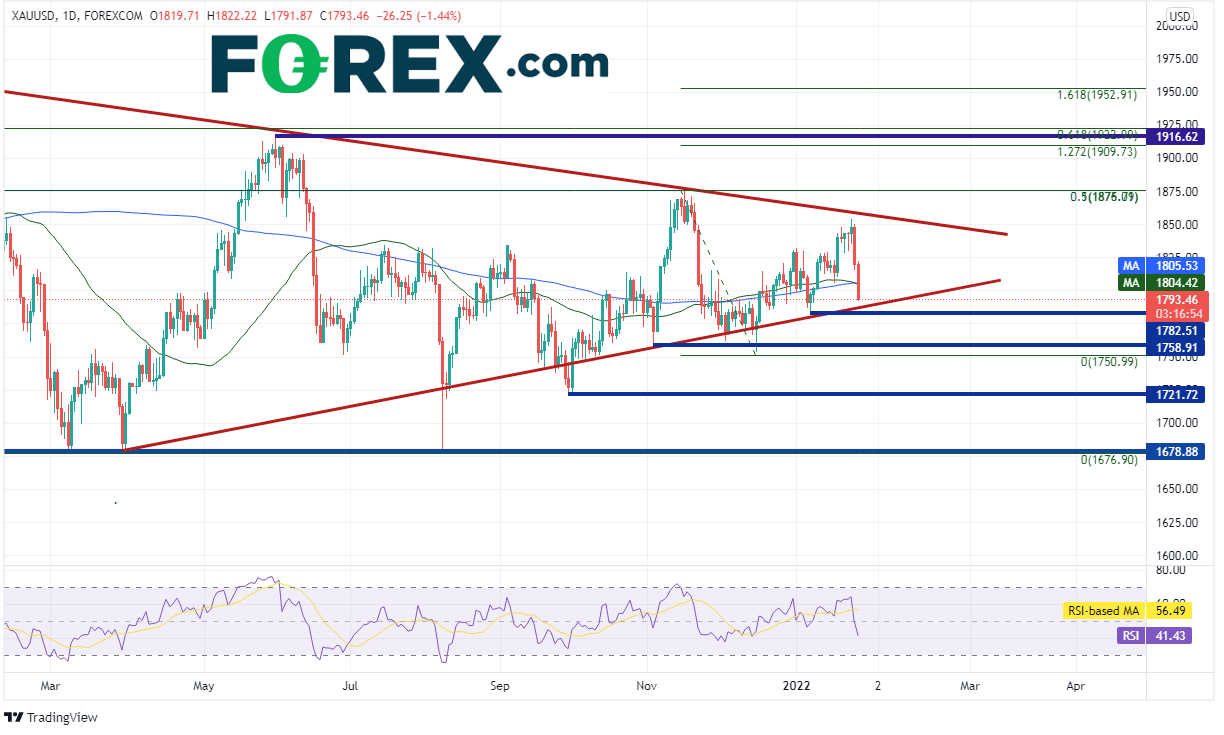 Q: What happens when you combine a stronger dollar with weaker Gold? Similarly, NZD/USD had been consolidating within a descending triangle since February 2021.  The pair finally broke lower on December 3, 2021 and held support at the 38.2% Fibonacci retracement from the low of March 2020 to the high of February 2021 near 0.6694.  NZD/USD then bounced and tried to move back into the triangle, however it was rejected at the 50 Day Moving Average near 0.6890.  The pair then broke lower, forming a flag pattern. The target for the flag is near 0.6400. If price is to get to the flag target, it must first break through horizontal support dating back to June 2020 at 0.6514 and the 50% retracement from the recently mentioned timeframe at 0.6462.  Resistance is at the recent lows of 0.6704 and a confluence of resistance at the breakdown point of the flag and the 50 Day Moving Average near 0.6971. 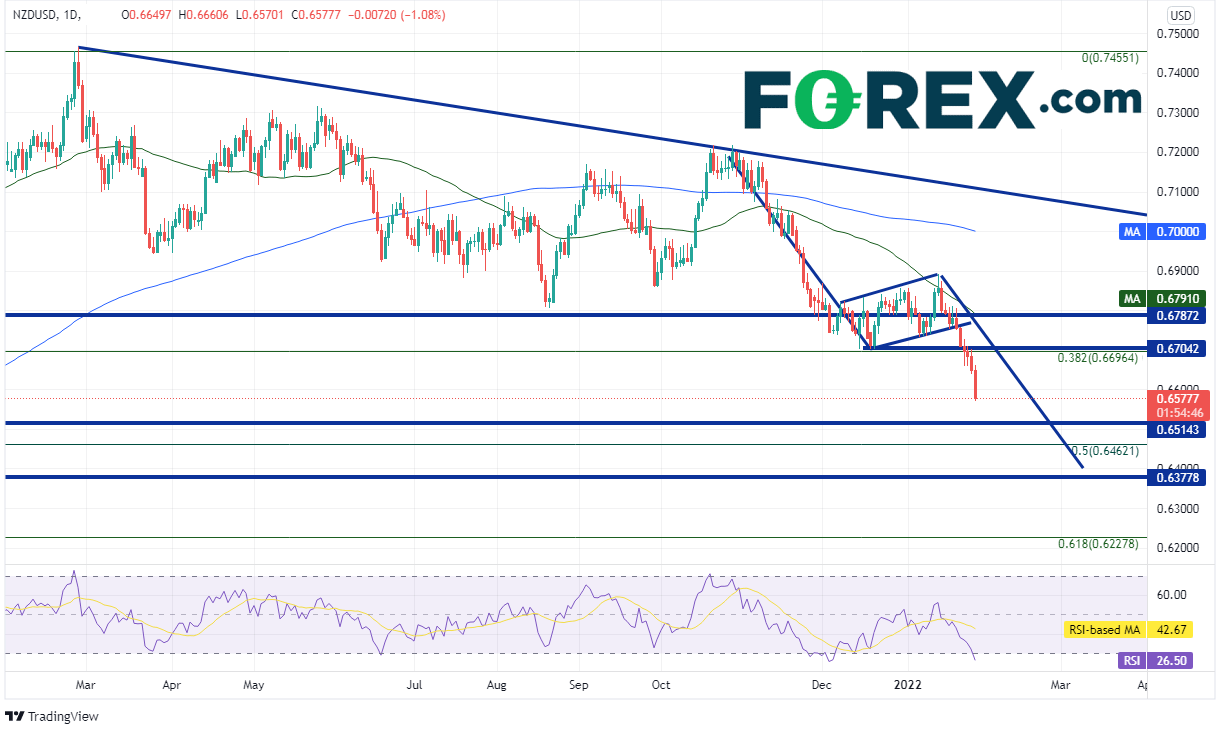 If inflation data continues to be strong from the US, the Fed will continue to be hawkish and the US Dollar will rise. This will place a drag on Gold and commodity currencies.  Watch for bears to sell bounces in AUD/USD and NZD/USD as the pairs and move to their respective flag targets.