US jobs topped but will inflation follow suit next week?

Friday’s stronger-than-expected US jobs report took everyone by surprise and the market’s reaction was swift as the dollar surged across the board. The end of the week will see the release of key US inflation data which could help provide some further direction to the dollar...

Friday’s stronger-than-expected US jobs report took everyone by surprise and the market’s reaction was swift as the dollar surged across the board. The headline figure came in at a good 209 thousand non-farm jobs added against prior expectations of around 180 thousand. What’s more, June’s number was revised up which brought up the averages over the past three months to a cool 195 thousand jobs per month. The rate of unemployment unexpectedly fell to a 16-year low, while wages grew by the expected 0.3 per cent on the month. As the dollar surged on the back of the strong US jobs report, buck-denominated gold fell while US indices struggled for direction as stock market participants wondered whether the dollar’s gains would hold and how, if at all, the stronger jobs report would impact the Fed’s decision in terms of the pace of future rate rises. It is worth remembering that this is only one month’s worth of data. If the dollar were to make a more meaningful comeback, we will need to see more evidence that the economy is on a sustainable path of growth and further acceleration in inflation.

Next week’s economic calendar is quieter

After a busy first week of the new month, when lots of fresh data from the month that has just ended are released, the second week of a new month is typically not as busy in terms of macro data. This, coupled with the fact that we are now well into the summer, when many market participants are on holiday, the markets tend to be fairly quiet anyway. However, the potential drop in trading volumes may mean we could see sudden sharp moves in the markets, especially if there is any further political drama in the States. Still, the end of the week will see the release of key US inflation data which could help provide some further direction to the dollar.  One could argue that given the extent of the dollar’s rally on Friday, the greenback could spend most of next week in consolidation until those inflation figures are released at the end of next week.

New Zealand dollar in focus ahead of RBNZ policy decision

But there are also a few other fundamental events throughout the week which could cause volatility to spike. On Monday, for example, we will have the latest inflation expectations data from New Zealand. Here, inflation expectations have gradually risen since last year and the one- and two-year ahead measures are currently standing at 1.92% and 2.17% respectively. This is well within the RBNZ's target band between 1 and 3% per cent. Thus, should inflation expectations rise further then it may influence the RBNZ's policy decisions in the coming months. However, the central bank is highly unlikely to raise interest rates when it announces its latest policy decision on Thursday morning NZ time (Wednesday evening UK and US), regardless of how inflation expectations may have changed in the second quarter. Still, any changes in the language of the policy statement could move the kiwi sharply.

Will the GBP/USD hold or break back below 1.30 handle?

On Thursday, the market’s focus will turn to the UK again as the latest official industrial data are released. If manufacturing production were to fall again after its surprise 0.2% drop previously, then this may put more downward pressure on the pound given the downbeat sentiment. The key level for the cable is at 1.30 and after Friday’s strong US data we are not very far off that handle now.

US inflation data may pour cold water on dollar rebound

In the US, the Producer Price Index (Thursday) and Consumer Price Index (Friday) measures of inflation will be key as far the Fed and dollar are concerned. If inflation were to fall then the greenback could potentially lose its NFP-inspired gains, especially against the likes of the euro, which is continuing to outperform, but also commodity currencies. On the other hand, if inflation turns out to be hotter-than-expected then the dollar could extend its short-covering rebound. In any case, most of the negativity might be priced in for the dollar. It probably won’t take much to cause the US currency to make a more meaningful comeback now. Still, it is questionable whether the dollar’s long-term rally has resumed, even if the Dollar Index has created a nice hammer weekly candle at key support area between 92 and 93. The lower support zone between 88.50 and 89.50 may still be tested in the coming weeks, if US data deteriorates again or if foreign central banks turn more hawkish amid improving macro picture around the world. 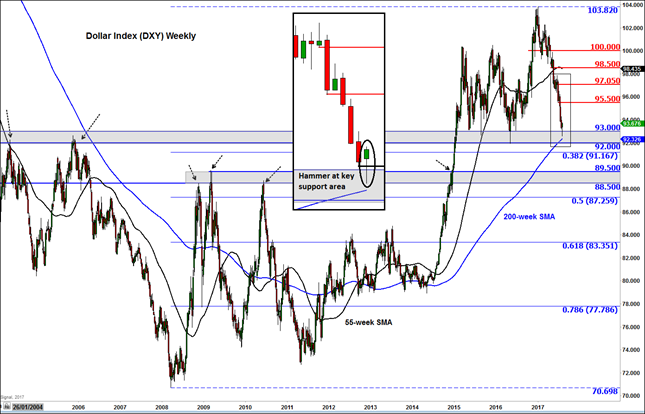