US Stocks: A Potential Seasonal Headwind for MLK Week Amidst Key Earnings Reports

The average and median returns for all the major US indices are negative for this week...

As anyone trading US stocks, indices, or bonds has probably realized by now, the markets are closed today for the Martin Luther King (MLK) Day holiday.

While certain states and cities began to honor the civil rights activist starting in 1971, MLK Day was not an official federal holiday until 1986, and it wasn’t recognized with a market closure by the NYSE until 1998. That said, we still have more than 20 years of data on US stock markets’ performance in the shortened holiday week, and the picture is not pretty: 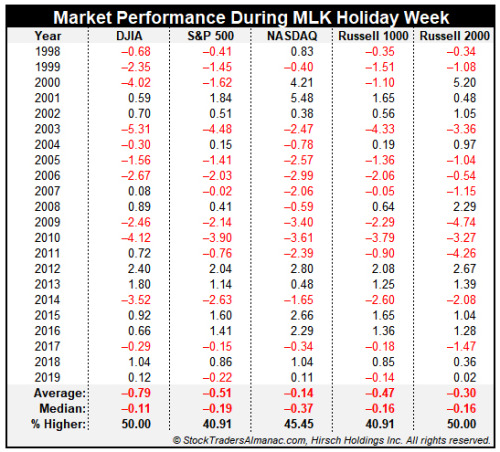 As the chart above shows, the average and median returns for all the major US indices are negative for this week, with no index rising more than half the time. That said, the figures have been more bullish since we’ve been in the more recent bull market, with most of the major indices (including the DJIA, Nasdaq, and Russell 2000) rising in six of the past eight years.

Of course, the full 22 period sample is a bit light to draw any firm conclusions, but we wanted to make readers aware of a potential seasonal headwind, especially with many US indices deep in “overbought” territory following the big rally over the past few weeks. Traders should keep a close eye on major companies reporting earnings this week, including Netflix (Tuesday), Procter and Gamble (Thursday), Intel (Thursday), and American Express (Friday).