S&P 500: US stocks could rise 6-7% further before potential crash

The US stock markets hit repeated new record highs last week. The positive sentiment has continued at the start of this week, with Asian and European markets drifting higher in an otherwise quiet day. US index futures point to further gains at the open later on. Although US indices do look overbought in the short-term and we may very well see a small pullback, I think there still further room to the upside before we see a significant correction, which I think will happen in the coming months, if not weeks.

The US stock markets hit repeated new record highs last week. The positive sentiment has continued at the start of this week, with Asian and European markets drifting higher in an otherwise quiet day. US index futures point to further gains at the open later on. Although US indices do look overbought in the short-term and we may very well see a small pullback, I think there still further room to the upside before we see a significant correction, which I think will happen in the coming months, if not weeks. For now though, it is clear blue skies for stocks. Sentiment in the markets has remained positive because a number of factors, for example the promise of ambitious US government spending under Donald Trump’s leadership. On top of this, US fourth quarter earnings have been rather good, while global major central banks have re-affirmed their dovish stances meaning that despite the improvement in economic data and a pickup in inflation, interest rates will likely remain near record low levels for a while yet.

However, the Fed is starting to turn hawkish and is tightening its belt. In Europe, growth is picking up and inflation is rising. Calls for tighter monetary conditions have become louder here, too. Given that the extraordinary loose central bank policy has been the number one reason for this massive stock market rally, with this being slowly withdrawn, yield-seeking investors may start to ease off the gas and bank profit on their long equity holdings. Saving might become popular again if interest rates start to rise. Meanwhile for US markets specifically, the rising dollar is a big issue. If Trump is unable to do anything about it and the currency appreciates further, this may hurt US exports and weigh on company earnings in the future.

So, the fundamental backdrop is building up for US stocks to head for a sizeable correction – a crash, if you will. However, the S&P 500 could still rise another 6-7 per cent before the probability of a correction becomes, in my view, very likely at around the 2460-2485 area. Why here? Well as the weekly chart shows, several things converge around 2460-2485, including the top of the long-term bull channel and measured move objectives of the previous major price swings. But the S&P does not necessarily have to get there to top out. Indeed, it is also possible that “the top” could turn out to be at much higher levels. No one knows. Many similar levels and setups have failed in the past. But what is different this time is that the rally is starting to look parabolic – a key characteristic of price action before a bubble bursts. But the bubble could get very large before it deflates or busts. Thus, stock market bulls should not want to miss out the opportunity that evidently still exists. But they just need to be on the lookout for reversal signs and quick to move to cash should things start to crumble. The bears may wish to wait for their opportunity patiently. 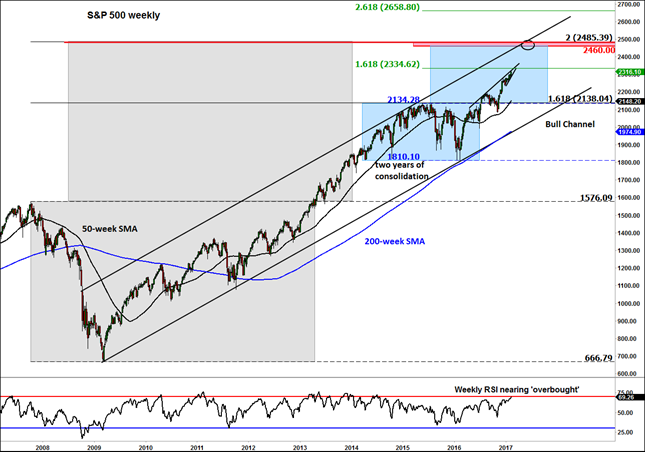 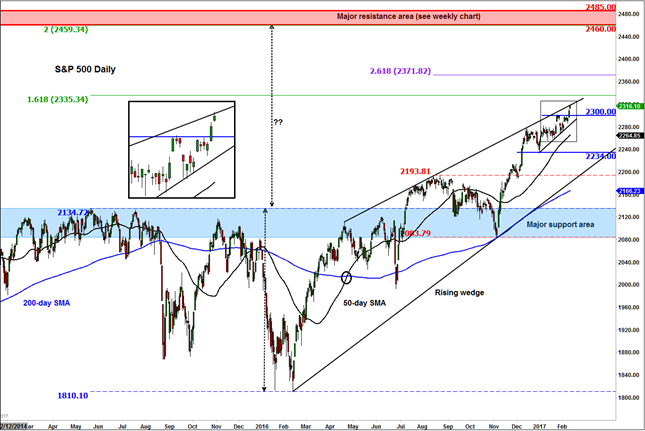