USD/CAD has tentatively halted its recent plunge and fluctuated around the key 1.4000 level and 50-day moving average for the first two days of the trading week, as the late-January relief rally in crude oil prices has reversed course.

Since mid-January, USD/CAD had been falling precipitously as crude oil rebounded from a tentative bottom after having dropped down to a 12-year low below $28 per barrel just two weeks ago. The USD/CAD currency pair has long been correlated to oil prices due to Canada’s reliance on oil exports as well as the US dollar’s inverse correlation with crude. As a result, drops in crude oil prices frequently translate into rises in USD/CAD, while surges in crude oil prices often result in declines for USD/CAD.

Prior to the current pullback down to the noted 1.4000 support/resistance area, the currency pair reached slightly above its 1.4600 upside target in mid-January on exceptional weakness in crude oil prices. Then, on hopes of a potential deal among OPEC and non-OPEC nations to restrain crude output, both the West Texas Intermediate and Brent Crude benchmarks rebounded and rallied off their lows, prompting the sharp pullback for USD/CAD.

What led to this week’s reversal of crude’s relief rally was a general realization that an output deal would not be easy to come by. Major oil-producing nations have conflicting agendas, and common ground would be exceptionally difficult to establish. Furthermore, persistent concerns about a slowing China economy and lowered oil demand from the world’s second largest crude oil consumer have exacerbated worries about oversupply.

As a result, a fundamentally bearish outlook on crude oil prices could potentially translate into a recovery of the current USD/CAD pullback, possibly towards further highs. This bullish outlook would be contingent upon the currency pair sustaining above the key 1.4000 level. In this event, upside targets reside at the 1.4200 level followed by the 1.4600 level once again. In the opposite event of an extension of the current pullback with a sustained breakdown below the 1.4000 level, the 1.3800 level is the next major support to the downside. 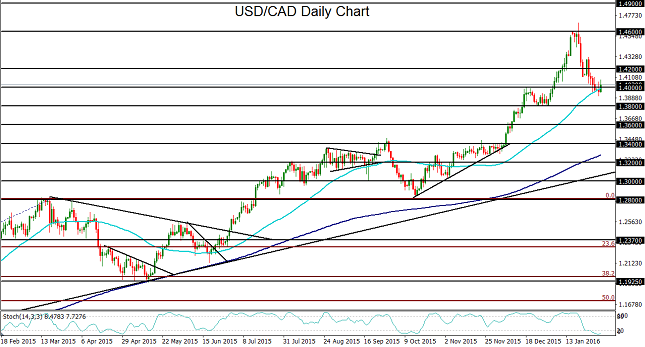