<p>USD/CAD surged sharply on Wednesday as the US dollar strengthened and crude oil prices pulled back. The greenback received a boost within the past few days from Fed members who have issued relatively hawkish comments that have stood in stark contrast to last week’s dovish FOMC meeting. Also serving to lift USD/CAD was renewed weakness in the oil-correlated Canadian dollar, which has been dragged down by a drop in crude oil prices.</p>

USD/CAD surged sharply on Wednesday as the US dollar strengthened and crude oil prices pulled back. The greenback received a boost within the past few days from Fed members who have issued relatively hawkish comments that have stood in stark contrast to last week’s dovish FOMC meeting. Also serving to lift USD/CAD was renewed weakness in the oil-correlated Canadian dollar, which has been dragged down by a drop in crude oil prices.

Contrary to the dovish FOMC meeting last week, where Fed Chair Janet Yellen presented substantially lowered expectations for the pace of US rate hikes this year, Fed officials this week have been considerably more optimistic, and hawkish. As a result, the greenback has spent the first half of this week rebounding and rallying from the substantial losses suffered last week after the FOMC statement.

This surge in the US dollar has been accompanied by a corresponding pull back in commodities, including oil. In the case of crude oil prices, the US government’s Energy Information Administration (EIA) reported on Wednesday that crude oil inventory shot up by 9.4 million barrels last week, far surpassing the 2.5-million-barrel build that was previously expected. Although this unexpectedly large increase in stockpiles was partially offset by a 4.6-million-barrel decrease in gasoline inventory, the extensive crude oil build prompted a retreat amid the recent price recovery.

This combination of a strengthened US dollar and oil-driven weakness in the Canadian dollar has led to an extension of USD/CAD’s rebound within the past few days from its new 5-month low just below the 1.3000 psychological support area up to key resistance around 1.3200.

From a trend perspective, the key question remains as to whether the current rebound for USD/CAD is simply a minor rally within the context of the sharp downtrend that has been in place for the past two months, or if it may potentially turn into a bona fide upside reversal to resume the long-term bullish trend. Fundamentally, this will depend heavily on the course of the Fed’s monetary policy stance in the coming months, as well as on the near-term prospects for crude oil prices, which continue to hinge upon the outcome of a proposed cooperation among major oil-producing nations to limit production. Technically, USD/CAD has reached a critical juncture in its recent rebound. With any breakout and sustained trading above the key 1.3200 resistance level, the rally could extend towards major resistance at 1.3400. Any further upside above 1.3400 could ultimately place the currency pair on track to continue its multi-year uptrend. To the downside, the noted 1.3000 psychological level remains the key support area to watch. Any strong and sustained breakdown below 1.3000 should next target the major 1.2800 support level, followed by a further downside objective around 1.2500. 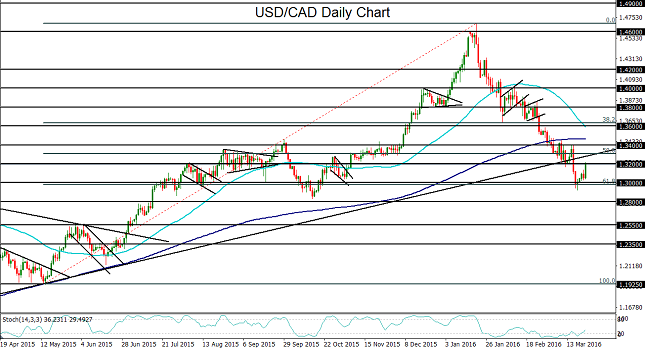