USD/CAD pulls back to key support as crude oil bounces

USD/CAD pulled back sharply on Thursday as crude oil staged a bounce from extreme multi-year lows and the markets digested the Bank of Canada’s decision a day earlier to keep its key interest rate unchanged at 0.5%.

Thursday’s surge in crude oil prices helped provide a boost for the long-battered Canadian dollar, which is closely linked to crude prices due to Canada’s reliance on oil exports. Crude oil’s bounce from 12-year lows on Thursday was prompted in part by a large, unexpected draw in distillate (diesel fuel and fuel oil) inventories, despite a greater-than-expected build in crude oil and gasoline inventories, as reported by the US government’s Energy Information Administration.

Besides this relief rally for crude oil, the USD/CAD pullback was also helped along by the Bank of Canada’s decision on Wednesday to keep interest rates unchanged despite some prior expectations of a potential rate cut in reaction to persistently low oil prices along with weak inflation and economic growth concerns. Furthermore, conspicuously absent from the rate statement accompanying this decision was any mention or hint of future potential rate cuts. This less-dovish-than-expected statement along with unchanged interest rates lifted the Canadian dollar from its multi-year lows, placing substantial pressure on USD/CAD.

From a technical perspective, USD/CAD’s sharp run-up in the past weeks and months, but especially since the beginning of the year, led to a prolonged period when the currency pair had been technically well-overbought. After hitting and exceeding progressively higher upside targets at 1.4000, 1.4200, and most recently, a new 12-year high above 1.4600, USD/CAD had been in extremely overbought territory and due for at least a moderate pullback.

After failing to sustain trading above the 1.4600 resistance level, USD/CAD has currently pulled back down to re-approach the noted 1.4200 level, this time as support. While this pullback is unlikely to turn into a full blown reversal, due to fundamental forces that continue to support the currency pair over the longer-term, there could be further room for pullback, especially if crude oil continues to climb from its multi-year depths. In the event of a breakdown below the 1.4200 level, a major support target for the pullback is at the key 1.4000 psychological support level. From a longer perspective, however, the currency pair remains in a strong bullish trend. Any continuation of this uptrend above 1.4600 has a major upside target at the 1.4900 resistance level. 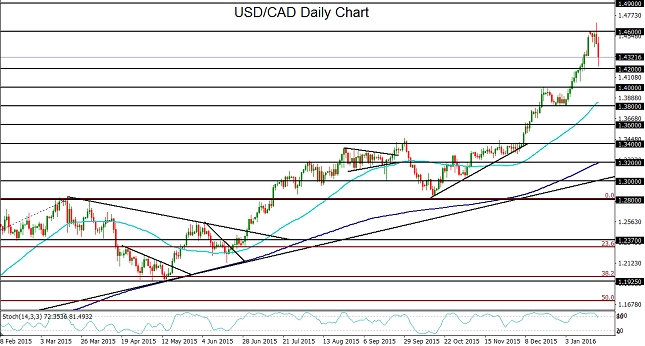