Friday’s simultaneous release of US and Canadian jobs data for December resulted in USD/CAD extending its sharp slide of the past three weeks. Friday’s plunge was driven in large part by the contrast between the US and Canadian employment data, as the US headline number fell significantly short of expectations while Canada’s job creation in December far exceeded forecasts.

Friday’s simultaneous release of US and Canadian jobs data for December resulted in USD/CAD extending its sharp slide of the past three weeks. Friday’s plunge was driven in large part by the contrast between the US and Canadian employment data, as the US headline number fell significantly short of expectations while Canada’s job creation in December far exceeded forecasts. Monday’s price action has seen a modest rebound for USD/CAD, which has pared some of Friday’s losses, but the currency pair remains pressured ahead of next week’s potentially pivotal interest rate decision from the Bank of Canada.

The US non-farm payrolls for December showed a disappointing 148K jobs added in December against prior expectations of around 190K. The unemployment rate came in steady and as low as expected at 4.1%, and wage growth also met expectations at a 0.3% increase in average hourly earnings month-over-month. While the smaller-than-expected increase in jobs for December still represented a solid showing overall for the US employment landscape, US dollar sentiment has been sharply bearish for the past several weeks, and a miss in the jobs data has not helped improve prospects for the greenback.

Meanwhile, Canadian jobs numbers once again came out much better than expected at 78.6K jobs added in December, versus a very low prior consensus forecast of only 1.8K. In addition, the unemployment rate fell even lower than the previous month to 5.7% against a prior forecast of 6.0%. This surprise jobs beat helped to boost the Canadian dollar against its major counterparts, most notably the struggling US dollar, ahead of the Bank of Canada’s rate decision scheduled for next week. Current consensus expectations point to another potential interest rate hike by the BoC – to 1.25% – after the central bank last raised rates back-to-back in July and September of last year.

From a technical perspective, USD/CAD has reached down to a key support area around the 1.2400 level. The broader trend for the currency pair shows a major downtrend from the highs of May 2017. In September, a substantial upside pullback occurred that brought USD/CAD back up to a 50% retracement of the broader downtrend. That 50% level served as key resistance from late October to late December. Since late December, the bearish bias has resumed, and could result in a continuation of the downtrend if expectations for the Bank of Canada continue to be more hawkish than expectations for the Federal Reserve. With any sustained breakdown below the noted 1.2400 support area, USD/CAD is potentially poised to target further downside support around the 1.2200 price level. 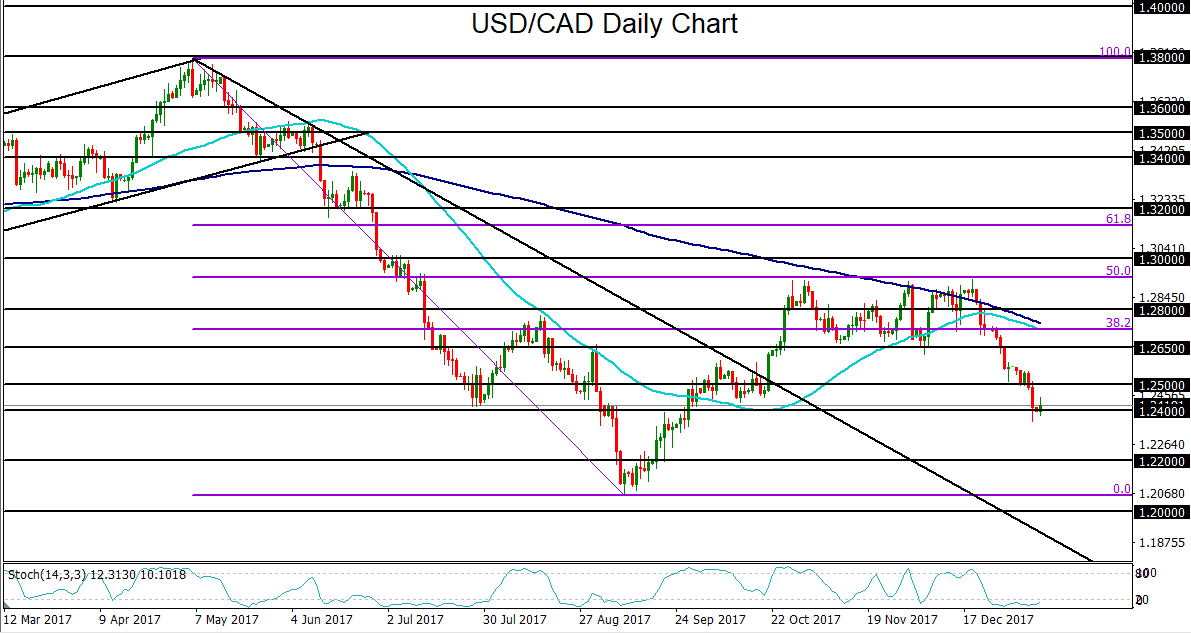