<p>Prior to the current crude oil uptrend that began in mid- to late January, oil prices had been persistently plagued by concerns over a global glut that appeared nearly impossible to rectify in the near-term. This situation was exacerbated by major oil-producers largely unwilling to cut or even just limit production due to fears of losing market share.</p>

Prior to the current crude oil uptrend that began in mid- to late January, oil prices had been persistently plagued by concerns over a global glut that appeared nearly impossible to rectify in the near-term. This situation was exacerbated by major oil-producers largely unwilling to cut or even just limit production due to fears of losing market share.

Within the past four months, however, the once-dire situation has begun to alleviate itself as US crude oil production has slowed markedly due to attrition caused by the prolonged period of low prices, and a series of other production slowdowns has started to unbalance the global supply picture.

Earlier this month, wildfires in Canada dramatically disrupted Canadian oil production, although output has been recovering since then. Separate declines in production have also occurred in other major oil-producing nations, including China, Venezuela, and most recently, Nigeria. Also helping to support crude oil prices last week was a report by the US Energy Information Administration of an unexpectedly large decrease (-3.4 million barrels) in US crude oil inventories, as well as a rise in the global oil demand forecast for 2016 to 1.2 million barrels per day by the International Energy Agency.

The rise in oil prices due to these and other factors has strengthened the Canadian dollar dramatically over the past four months, as Canada’s economy is heavily dependent upon oil exports. This has resulted in a sharp slide for USD/CAD from January as the Canadian dollar has surged on the back of recovering oil prices while the US dollar has generally lagged since the beginning of the year.

Most recently, the USD/CAD downtrend reached its bearish target and a new 10-month low around 1.2500 support in early May before rebounding. The rebound was prompted by a US dollar resurgence and a pullback in crude oil prices, which pushed the currency pair back up to major psychological resistance at 1.3000 by early last week. The 1.3000 level is also in the vicinity of the 61.8% Fibonacci retracement of the last bearish run from the late-March high down to the noted early-May low around 1.2500.

Throughout May thus far, USD/CAD has been unable to break out above this major 1.3000 resistance level, largely due to the fact that crude oil has persistently strengthened. In the event that oil prices remain supported and USD/CAD continues to trade under 1.3000 resistance, a breakdown below the next major support level to the downside at 1.2800 could potentially prompt a substantial move back down to the noted 1.2500 support target. 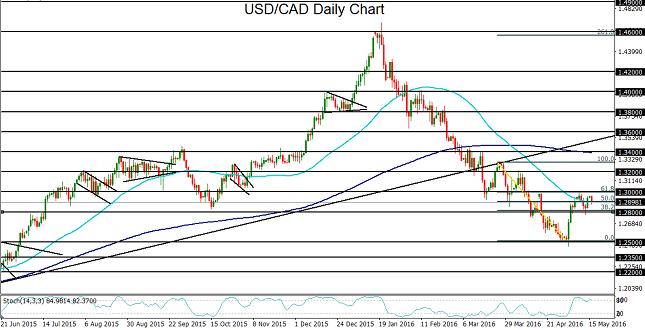