<p>The USD/CAD’s recent upsurge has been halted by a rebounding price of oil today and on profit-taking given that the Loonie has reached a key resistance level around the 1.30 handle. What the USD/CAD does next will depend to a large degree on the direction of oil prices and economic data from the US later this week.</p>

The USD/CAD’s recent upsurge has been halted by a rebounding price of oil today and on profit-taking given that the Loonie has reached a key resistance level around the 1.30 handle. What the USD/CAD does next will depend to a large degree on the direction of oil prices and economic data from the US later this week.

The USD/CAD turned sharply higher ever since traders realised that there was a lack of supply beneath the psychological level of 1.25 last Tuesday, leading to a 500-pip rally to the next psychological hurdle of 1.30. The Loonie’s aggressive rally from last Tuesday was triggered mainly by a corresponding sell-off in crude oil. Crude prices have since been on a roller-coaster ride but effectively in consolidation mode since the start of this month. Speculators have trimmed their bullish bets on oil amid profit-taking after the recent upsurge, at least judging by the latest positioning data from the CFTC and ICE.

Now that oil prices have recovered noticeably, traders are trying to make a more sober assessment of the situation. Among other things, they are now weighing the impact on oil prices of the still-high global supply glut, the appointment of Saudi’s new oil chief Khalid al-Falih (who is widely expected to follow the strategy of protecting the nation’s market share, thereby reducing the prospects of a "freeze" or similar deal with other large oil exporters in the future) and the ongoing wildfires in Canada’s city of Fort McMurray, which has reduced the nation’s daily crude output by 1 million barrels per day. Unfortunately it could take a very long time before the fire is brought under full control so its impact on oil production remains unclear.

Because of the fire, crude inventories in the US are likely to have fallen as Canada exports its oil mainly to its southern neighbour. This thesis will be put to the test in the coming weeks, starting tonight when the American Petroleum Institute (API) releases its latest crude stockpiles report. The official oil report from the Energy Information Administration (EIA) will be published on Wednesday. The trend for oil prices and in turn the Canadian dollar may therefore become clearer by Wednesday afternoon.

Meanwhile, the US dollar’s rally over the past several days look suspicious because the incoming data from the world’s largest economy have been mostly poor. The key US data to watch this week include the weekly unemployment claims figure on Thursday, followed by Friday’s release of retail sales, PPI and consumer sentiment. These numbers will need to beat expectations decisively if the dollar is to extend its advance; otherwise, another sell-off could be on the cards.

Ahead of the above-mentioned macro factors, the USD/CAD has arrived at a key short-term resistance level around the 1.2985/1.3000 area. This is where the psychologically-important 1.30 handle meets the previous resistance and the 50-day moving average. A potential pullback of some sort from here should not come as a major surprise. But the Loonie has already broken back above the long-term support and resistance level of 1.2835 and taken out a couple of bearish trends, too. For as long as this level is defended now the path of least resistance would be to the upside. However, a break back below it would be deemed a bearish outcome. 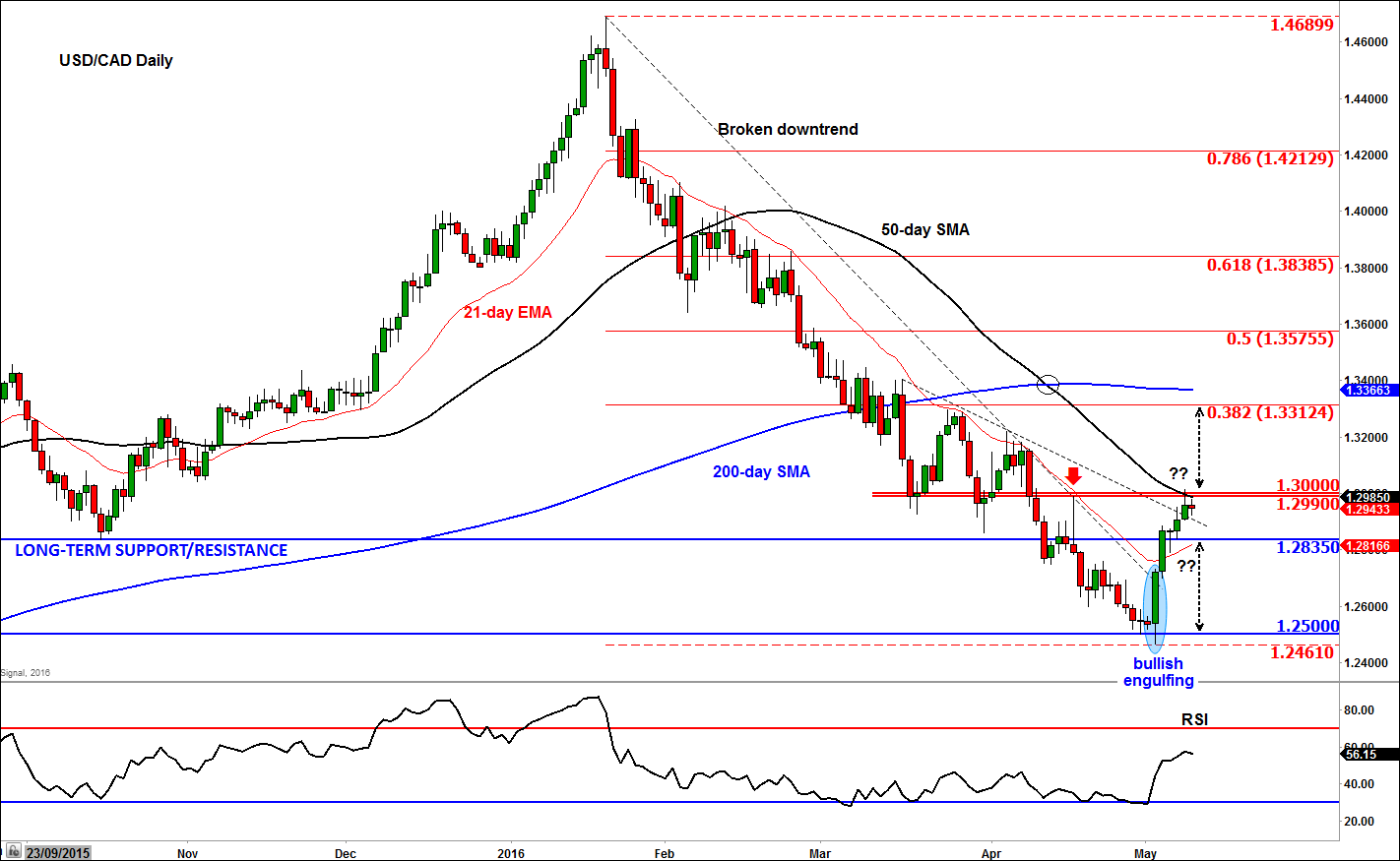