Two weeks ago, we highlighted a constructive candlestick pattern off bullish trend line support on USD/CHF and concluded that the pair could well bounce toward near-term Fibonacci resistance levels at 1.0120 (61.8%) and 1.0210 (78.6%). It took its time getting there, but USD/CHF finally edged up to test the 1.0210 level yesterday, leaving the pair trapped between the proverbial "rock and a hard place"  ahead of today’s Fed meeting.

As we noted in yesterday’s full FOMC preview report, the US central bank will almost certainly leave interest rates unchanged and make relatively minimal changes to its statement. Therefore, the market’s reaction will hinge on the base-case expectations and what traders "read between the lines" of the subtle language shifts. In other words, the initial reaction to today’s FOMC statement is difficult to handicap, but we don’t anticipate the sort of massive moves we’ve seen around previous monetary policy statements.

That said, a less-dovish-than-anticipated statement could still be enough to drive USD/CHF through 78.6% Fibonacci resistance at 1.0210, potentially clearing the way for an eventual move toward the 5-year high at 1.0325. The still-intact uptrends in both the MACD and RSI indicators, as well as yesterday’s Bullish Engulfing Candle* on the daily chart, support this bullish view. Conversely, a big dovish shift in the statement would likely drive USD/CHF down, though we would still anticipate that buyers would emerge around the 5-month bullish trend line near parity (1.00). 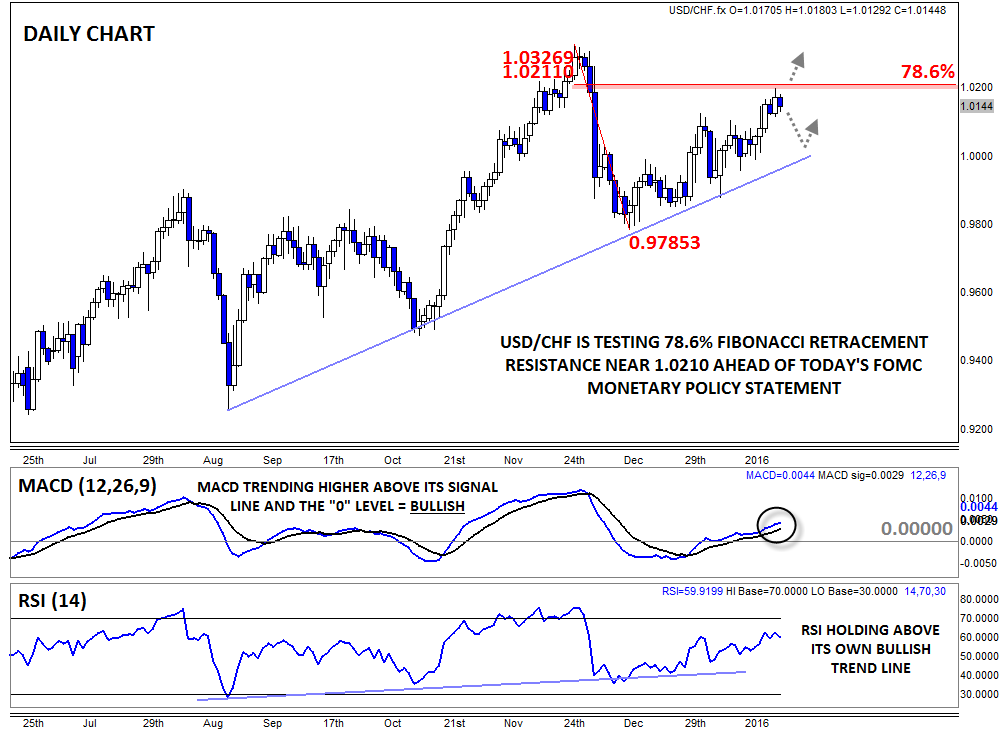